New England is probably best known for its agriculture. There’s the university in Armidale and Tamworth’s hugely popular annual country and western music festival too, but despite having a local population of students and hardworking farmers – both groups rarely known to shy away from a frothy or three – there hasn’t, until recently, been much opportunity to sink a frothy of the crafty kind, let alone fresh at a brewery.

Fortunately, this is changing, making a road trip around the region increasingly appealing for beer lovers keen to sniff out tasty watering holes worth investigating, as expat Brit Matthew Taylor discovered.

First stop for brunch was in Morpeth, in the Hunter Valley, well known for its sourdough bakery and once a significant port on the Hunter River. After stocking up on delicious bread at the sourdough bakery, it was time to head for the Commercial Hotel, home of the Morpeth Brewery.

This is about as micro as a microbrewery can get: hidden behind the dart board in the main bar area, a sliding door reveals a 200 litre brewery shoehorned into a space not much bigger than 3m by 3m. This particular piece of Alice in Wonderland like magic has been achieved by using an innovative 200 litre Speidel Braumeister from Germany that's designed to handle both key brewing processes of mashing and boiling within a single footprint.

Highlight of the beers sampled was the Swan Street Stout, which was poured from one of two handpumps. Other beers on offer from the knowledgeable host included Close Call Pale Ale, an American pale ale commemorating the devastating 1955 flooding of the Hunter Valley that left most of Morpeth untouched. Also available for sampling were Trade Winds, a 6 percent ABV IPA, and Big Hitter, an amber ale modelled on an English ESB. The range always features a mix of regulars and occasionals created by chief brewer Dave Allen, who brewed the first Morpeth ale on Anzac Day 2012: a dark ale called, you guessed it, Anzac Ale.

The Stout was so good that the plan was to take some away but, alas, they had run out of growlers and squealers. Necessity being the mother of invention a solution was soon fashioned: a quick trip to the café across the road yielded a soy flat white for the road and a two litre milk carton which was steam cleaned on the espresso machine and borne triumphantly back to the bar of the Commercial Hotel to be filled.

Heading north through the smaller country towns provides ample opportunity to enjoy the hand painted signs by the side of the road advertising their owners’ skills and capabilities in diverse and often amusing combinations. Particular favourites were "Hamburgers and Objet d’arts” and “Horse poo – cream teas”…

Long roads and light traffic also allowed time to ponder how the craft brewing scene has remained a fairly metropolitan affair in NSW with the state only served by a small, albeit growing, number of rural or country town brewers. Back in the 1880s, eight out of ten breweries were located in a regional area and New England sported breweries in Tamworth, Glen Innes, Armidale and Inverell. The advent of the railways brought increased competition from the city breweries that often bought up the smaller concerns, later closing them or squeezing out the local brewers by buying pubs and controlling what they could serve. This brought an end to brewing in Armidale in 1920 with the closure of Phoenix Brewery, which marked the start of the drought for craft brewers that would last for nearly 100 years in New England.

With the sun setting and still absorbed in contemplation with only a few kilometres left to our destination, we almost missed the welcoming sign outside the big shed that houses the New England Brewery (whose brewer Andrew Tracey-Smith is pictured below). It’s on the main street in Uralla, a small country town on the New England Highway, 23km southwest of Armidale, and is one of the businesses bringing smalll scale brewing back to the region. As its emblem, New England uses a flying sheep, acknowledging the importance of this sturdy beast to the local economy. 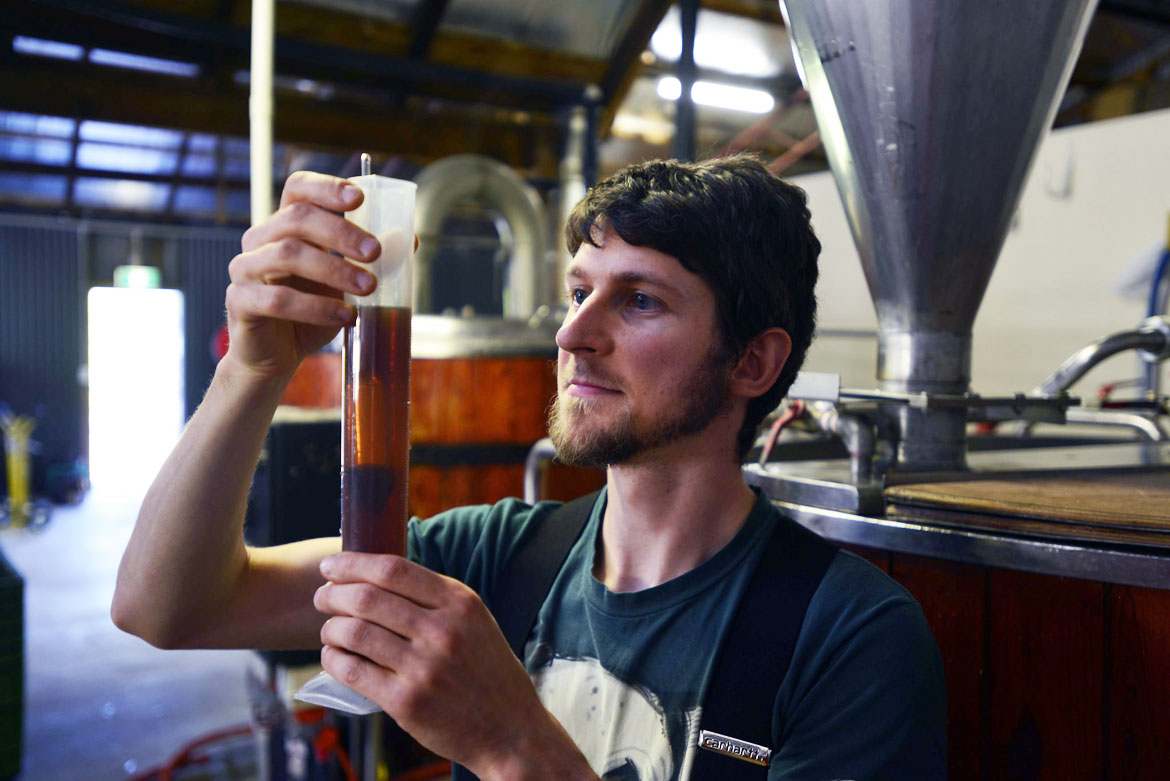 If, like us, you call in during the winter months, you’ll find a welcoming log fire, part of a brewery that’s located in a tin-roofed shed that used to be a wool store then the local mechanics shop and petrol station. The front of the building is now a bar and seating area that offers uninterrupted views of the brewing process going on out back and the New England highway out front.

The first beer on tap to catch the eye was the New Englander Brown Ale, a delicious drop that improved as it warmed up in the glass. Using old school Pride of Ringwood hops, flavour wise it sits somewhere between a northern English brown (malt dominant, but not too sweet) and an American style brown (featuring heavier hopping). Brown ales are slowly beginning to find favour in Australia – Mornington Peninsula, Cavalier and Brookes brew three good examples in Victoria – even if most come as seasonals, so it was good to hear that the New England team has plans for wider distribution of its ales including the Brown.

We also sampled the New Englander Pale and Golden Ale, the latter a Belgian style golden that was a fair interpretation of the style if not quite as complex as the classic Belgian originals, and left with a mixed carton of longnecks for further tasting and research at a later date.

New England’s relative affluence is built on the back of the sheep industry and this was apparent the next day as we returned to Uralla to visit the indoor markets. While huge trucks carrying hundreds of live sheep rushed by outside, indoors the pace was altogether slower. Ninety-year-old nonnas were sitting at the back quietly knitting children’s clothes, appearing to use touch rather than their fading sight to knit one, purl one, while their daughters and granddaughters served the people browsing the beautifully crafted woollen clothes on display. After purchasing a brightly coloured sausage dog in clashing red and yellow as a car mascot, we headed out in search of our next destination.

Just a few kilometres south of Uralla is the tiny hamlet of Kentucky, home to one of New England’s quirkiest establishments. Eastview Estate is the brainchild of Stephen and Lyn Dobson, housing the fine dining restaurant Pinot as well as a distillery, brewery and winery. Visiting at early lunchtime, we were ushered in to the marvellous ‘Speakeasy’ tasting bar, a temple to steampunk with a prohibition vibe and decorated with various Hollywood artefacts.

Before settling in rural New England, Stephen worked in Hollywood as a visualiser, helping to bring scripts to life for studio execs. He credits his success at Eastview to his ability to pre-visualise the drinks he wants to create. His award-winning spirits are being savoured in such hip eateries as Matt Moran’s Aria, Chiswick and Bondi Fish Restaurants. Dobson’s Gin was featured in Australia’s best gin & tonic, as voted recently by Gourmet Traveller, and uses 21 botanicals. It is produced on ‘The Methuselah’ – a unique twin-head distillation apparatus that can produce either gin or vodka.

But we weren’t here for the spirits, however tempting. Perching ourselves at the bar a line of beer taps presented another aspect of Stephen’s esoteric creativity – the naming and illustrations for his beers.

First taste was Old Trout Best Bitter, which did a decent job of creating an English style bitter while showing off a classic brown trout on the pump clip. Next up was Sick Puppy, a dark coloured Belgian dubbel, very drinkable despite (or maybe because of) the illustration of a near naked overweight man on all fours, doggy-style, wearing a canine cone of shame. Dark interpretation indeed!

Sadly, we couldn’t hang around all afternoon, which is what this emporium of food and drink really requires. With the beers only available on tap at Eastview Estate, the best approach would seem to be to start with wine sampling and lunch at their adjoining restaurant, followed by a brisk post-prandial walk, preferably with dogs, before returning to a comfy chair to sample spirits and finish with a cleansing ale. Only then could you do justice to what Stephen and Lyn have created at Eastview Estate. Though, even then, one visit may not be enough.

As we headed home for Sydney, it was clear that, after a gap of nearly 100 years, New England’s craft brewing drought has been broken. Indeed, the trickle of new breweries is set to continue. In a happy postscript to our road trip came news that a brewery with a restaurant, cellar door sales and tastings is being planned for the Old Inverell Road in Armidale, close to the UNE campus. Owner Sam Martin intends to plant a hectare of hops on his farm to add some local flavour to his brews too.

About the author: Matthew protects the environment by day and searches for the perfect brown ale by night.