Up above the new White Rabbit barrel hall at the Geelong complex they share with Little Creatures sits an open fermenter in a temperature and environment controlled room. On the wall of that room, where the yeast bubbles away developing its flavours and character, a Lewis Carroll quote is scrawled along the wall.

“How puzzling all these changes are! I’m never sure what I’m going to be, from one minute to another.”

They couldn’t have found a quote more apt, unless it was the White Rabbit himself uttering those words to the Caterpillar instead of Alice. Regardless, the changes underway at White Rabbit are considerable, from the 150km move from its original Healesville home to the burgeoning barrel program that can now come into its own thanks to the increased space available at Geelong.

With the formal opening festivities completed in early December, work is now underway for head brewer Jeremy Halse and his team to get the barrel program chugging along. The stock of barrels currently sits at around 120, with more in the woodwork as beers come of age. For Jeremy, the program is one of the most exciting endeavours he has been a part of since joining the White Rabbit massive in 2009.

“It’s the best thing ever," he says. "We’ve been dreaming this up for a little while now.

"We’ve had a couple of trips to the US and, looking around there, wondering if we could actually do it here. We started tinkering in Healesville, but now we can really bring it to life.

“For me, it’s a long term project. If you come back and speak to me in five years’ time, I’ll be able to tell you about this barrel and that barrel and what we’ve achieved. I’m really starting to understand the nuances of each barrel.”

The program will be a core part of the White Rabbit philosophy, and in time will feed through into their core range of beers. A new White Rabbit red ale will be released on tap around May, and bottled by the end of 2016.

“The new Rabbit Red is all about these barrels, I don’t want to just pick a wacky barrel of something and make it a gimmick – if we’re going to do this, we need to be evolving a beer from the open fermenters through to the barrels. We’ve got to make it clear that this is how we make White Rabbit beer.”

Other special releases, including a lambic style ale and a Berliner Weisse, will be rolled out over time, most likely in large bottle format and on tap at the barrel hall. In time, Jeremy hopes to step the program up to larger "foeder" barrels to allow for greater supply and experimentation. 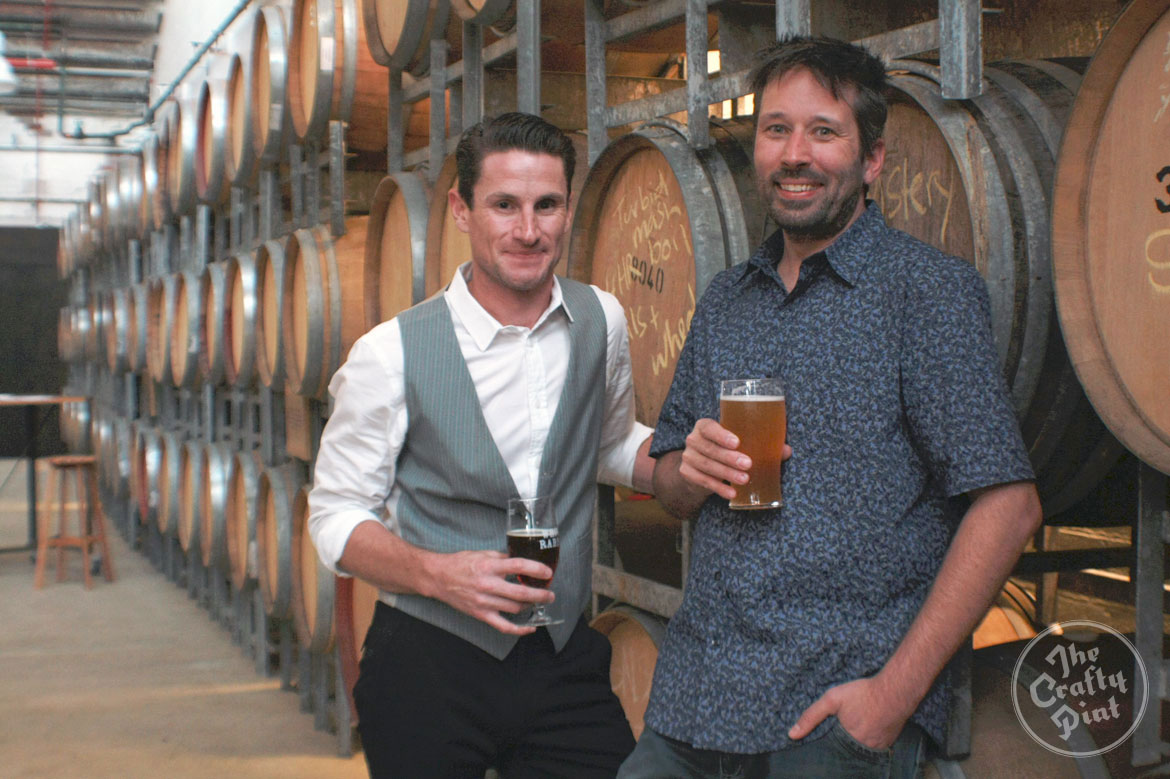 White Rabbit and Little Creatures marketing manager Ash Cranston (above left with Jeremy) has seen the development of the brewery from a pile of dirt – in fact, he was the man who broke ground at Healesville after they got their liquor licence. Seeing the brewery come into its own and stand apart from its Little Creatures stablemate has been an incredible thing to watch, he says.

“For a long time, Rabbit had a little bit of Creatures in it – it never got to just be White Rabbit by itself," he says. "It was the poor little cousin of Creatures.

"But over the last year we’ve really said, 'You know what? Rabbit is big enough to grow up and come out of the shadow of Little Creatures and stand by itself.'”

Part of that process included developing a look and feel for White Rabbit that helped it stand apart from the Little Creatures brand.

“This was so crucial to us that we wrote a list on this site when we moved here, saying we didn’t want Rabbit to turn into Little Creatures again," says Ash. "We wrote a list of every single thing Little Creatures does, and said Rabbit can’t do any of those things. That goes all the way down to using chalk and bright colours – Rabbit will never use any of that stuff.

“This is the next step and the next stage in the Rabbit story. Now is the part where we get to play with barrels, sours, and really put our open fermenters on show. It’s hugely important that it gets to stand by itself.”

With the backing of Creatures and the wider Lion group, the barrel program is expected to provide a bridge between the “pointy end” of the craft beer market and the wider public, who are still in education mode when it comes to barrels and rarer sour styles of beer, Ash says.

“In the last year and half I think we’ve seen a real emergence of these types of beers. For us, they are still very much at the pointy end of the market with guys who really want those big sour beers and so on," he says.

“We see it as where the market is going to go. People want easier drinking, refreshing styles of beers – the big stuff is there and that’s great, but I think people are starting to want something else as well.”

White Rabbit is by no means the first Australian brewery to introduce a barrel program, and joins fellow Victorians Boatrocker in quick succession with a dedicated barrel room, but it may well be the first time such brews have been targeted for mainstream appeal.

“It’s about showing people that there are other beers out there that have been made for hundreds of years and are just as approachable as your everyday beers," says Ash. "It’s been a long journey, and we want more [barrels] so we can bring more people into that world, because the whole team here gets really excited about it.” 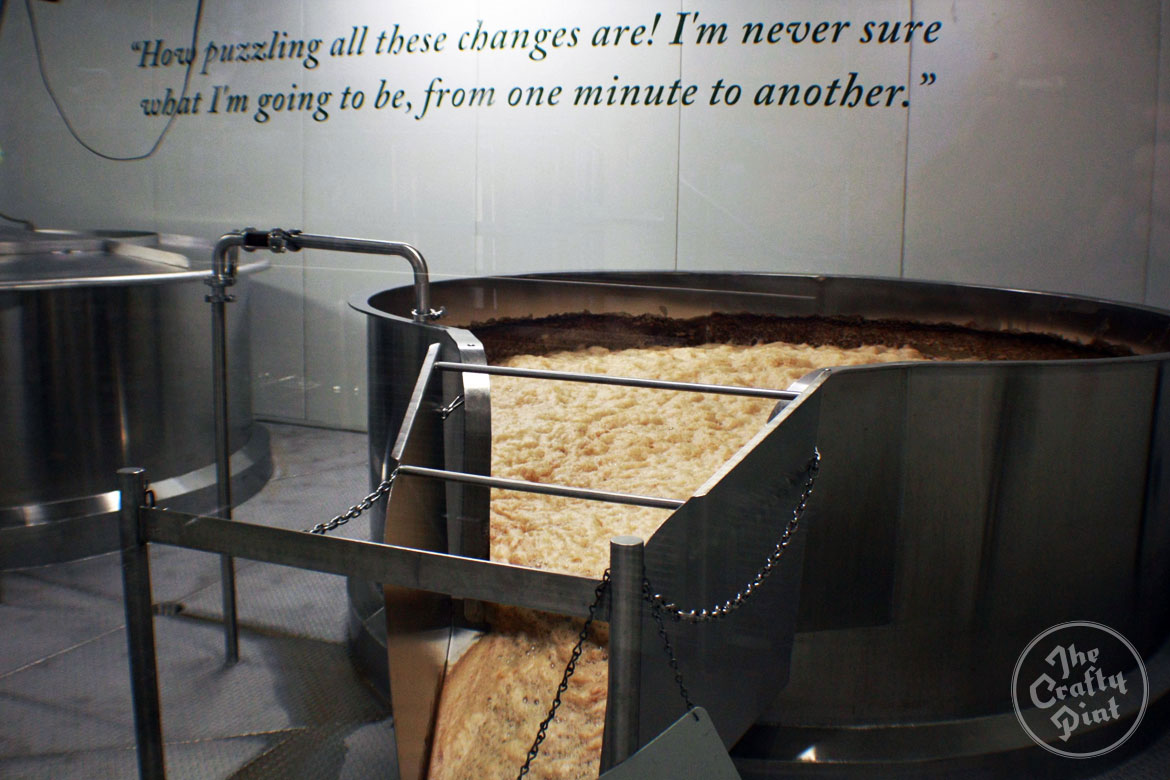 That appeal to market is reflected in the venue itself, with the cellar door style of the barrel hall encouraging punters to try beers, buy bottles or other goods from the retail area, and show themselves around via a self-guided tour.

“We wanted to create a space where people can come in and try beers where it isn’t intimidating,” says Ash. “There’s no geek talk, we just want people tasting beers.”

For Jeremy, developing the program and exploring the power of open fermentation (pictured above) is an ongoing learning process for both the brewery and the public. As more barrel-aged beers join the White Rabbit lineup, there will be greater opportunity to discuss the reasons they have undertaken the project.

“This brewery gives us the opportunity to educate people," he says. "That’s what I’m keen to do: I want to be on both sides of the fence and talking to people.

"I get excited about beer, and even more excited when someone else does too.”


The White Rabbit Brewery and Barrel Hall is now open Sunday to Wednesday: 11am to 5pm, and Thursday to Saturday 11am to 9pm, and is located at the Little Creatures Brewery Village, 221 Swanston Street, South Geelong. 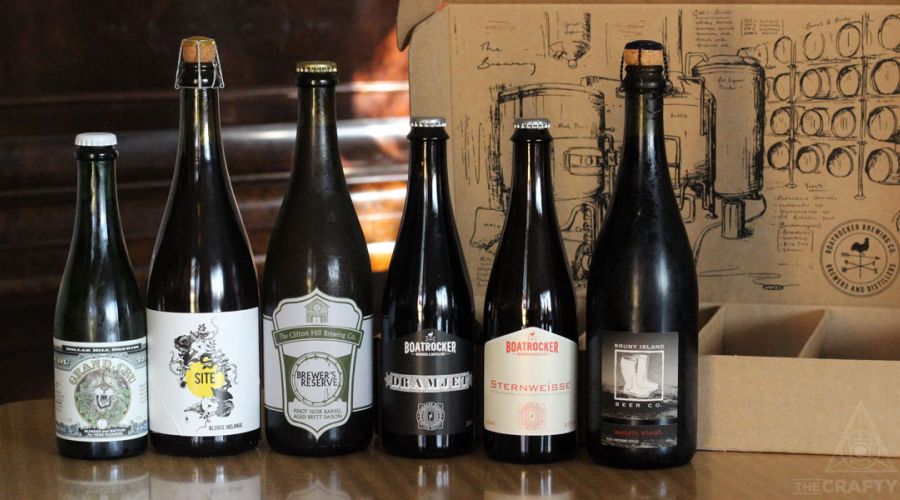 The Vinification Of Beer

Barrel ageing, mixed fermentation and the mimicking of wine in presenting certain beers isn't new. Yet the blurring of lines between beer and wine continues apace. We speak to brewers and somms operating on the frontier. read on