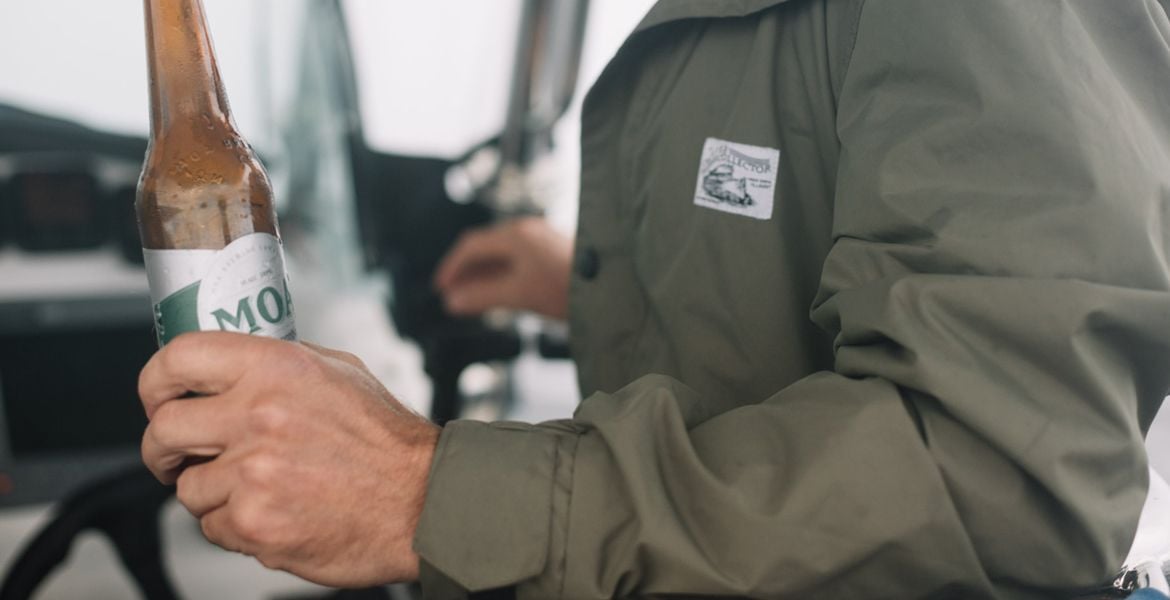 Our new Kiwi correspondent, Jono Galuszka, kicks off his monthly feature series by sitting down with one of the most controversial figures in New Zealand beer.

Geoff Ross, CEO of Moa Brewing Company, has led the brewery through brand revamps, listing on the NZ stock exchange and a fair few marketing campaigns that have ruffled feathers among the beery masses across the ditch. But, despite the brewery's mixed fortunes over the last few years, Geoff remains convinced the quality of the beer they produce is what ultimately does the talking.

“I had some great friends and great contacts back in the 42 Below days, but beer people typically don’t have the ego that spirits people had. I think beer people are nicer to deal with.”

It is a hell of a statement for Geoff Ross to make. As the chief executive of Moa Brewing Company, he has felt the red hot poker of the craft beer glitterati – often via a scathing blog or vitriolic social media posting – more than almost any other member of New Zealand’s scene.

The company he runs is infamous for pushing buttons in various ways, including rebranding their cherry wheat beer as a beer to be drunk at breakfast, comparing one of its beers to Marlboro cigarettes and including a photo of a company board member using a woman as an ashtray holder in an important financial document. And Geoff has fronted it all.

Geoff’s story in the beer world goes back to his time distilling hooch in his Wellington garage. That hooch would turn into 42 Below, a vodka brand he sold to global drinks giant Bacardi for $138 million in 2006. Estimates from the time put his cut at a cool $30m, which he has invested in companies as varied as fragrance brand Ecoya and mobile technology company The Hyperfactory.

“Truth be known, I’m more a beer person than a spirits person,” he says. “I could see the whole craft beer thing coming from a business point of view. It happened with wine and coffee and spirits, where people started to care a lot more about what they are drinking and getting a more developed palate.”

Since buying into Blenheim-based Moa in 2010, he has steered it through various brand revamps, a listing on the New Zealand stock exchange – it started at $1.25, plummeted to 26 cents, and now hovers around the 80 cent market – and multiple business headaches. There have been battles with French-owned wineries over resource consents, changes in business strategy and lost contracts with airlines.

All the while, the beers created by head brewer Dave Nicholls and his team continue to bring home awards by the bucket – one of the most recent being the coveted golden gumboots from the Malthouse West Coast IPA Challenge for Perris Sky Juice, which Kiwi beer writer Neil Miller described as “like getting smacked in the fact with a sack of sweet Valencia oranges”.

Now in its 14th year of operation, the company is continuously releasing new products, all the while keeping longtime fans well stocked with favourites. (This writer rates their imperial stout extremely highly.)

Geoff says buying into Moa, rather than starting a brand from scratch like he did with 42 Below, was a smart move. “From a business point of view, the first few years are the hardest. Maybe I was older, but I wasn’t wanting to start from scratch because it’s bloody hard. Having Josh Scott [Moa’s founder] do the building block was a great thing.”

Geoff, who built up his marketing skills at Saatchi & Saatchi, quickly set about revamping Moa’s brand – one which has been in constant flux. From its old designs, which Geoff politely describes as “agricultural”, Moa’s brand has moved through its infamous Mad Men phase and has settled into something that projects Kiwi’s love of the outdoors.

“The strategy is probably pretty obvious,” Geoff says. “We want to have an appeal as a New Zealand craft beer that can reach a young suit on the Auckland viaduct, or the shepherd in the Mackenzie Basin. We want to have a brand that can speak to a pretty wide group of people, here [in New Zealand] and offshore.”

But the strategy has seen him cop his fair share of flack. The Mad Men phase, most evident in the company’s initial public offering documents, saw the company and Geoff put under intense scrutiny. People called him sexist, and many drinkers have boycotted Moa’s products as a result.

“It’s not water off a duck’s back,” he says. He feels people may have had a big issue with him and his investment partners because they got into craft beer without being “two guys brewing in their shed, getting into craft beer the hard way or more earnest way”.

He points to the fact Lion-owned Mac’s Brewery started producing a pale ale, IPA and imperial IPA after Moa’s Original Lager and Session Pale Ale became the biggest-selling craft beers in New Zealand. They, along with Moa White Lager, are the three products Moa gets contract brewed in large volumes to take on the brands owned by multi-national companies.

“What we did do is open up supermarkets. It gave us a spot in a marketplace that had been pretty lazy.”

Giving that market a shake is no different to what other companies have done, managing to change New Zealand’s food and beverage landscape in the process, he says.

“Look at road workers, who are going out in the morning and buying lattes or mochaccinos. It’s happened in coffee. It’s happened in wine. I think it will go really big in craft beer. It’s not going to be easy. It’s actually bloody hard. But it feels like the beer landscape in New Zealand is on the verge of changing forever, and I think it’s the same in Australia.

“When you hear a shepherd, who has drunk Speight’s for the last 20 years, is looking in Cromwell New World supermarket for a really good craft beer, you know the landscape has changed.”

Australia’s beer landscape has its similarities to New Zealand’s, he says. Both countries have two big breweries – DB and Lion in New Zealand, CUB and Lion across the Tasman – and Lion’s strategy has been similar in both markets.

“Lion are great. If they are not doing it, they buy brands that are, like Little Creatures, Panhead and Emerson’s.”

Geoff says Moa is keen to get a bigger presence in Australia, where the sales strategy has been quite different. “We hardly sell Original Lager in Australia. We started with the better beers and better liquor stores.”

But Moa can only get so big in its current location. Contract brewing overseas could be on the cards in the future – “Blenheim is a bloody expensive place to make beer” – but getting more keg beer to Australia is a priority, Geoff says.

“Australia has always been kind to New Zealand brands. I remember walking down Oxford Street [in Sydney] with a bottle of 42 Below wondering how I was going to sell it, but people were keen on the product because of where it was from.”

While he is a big fan of the branding behind breweries like Pirate Life, Young Henrys and Mountain Goat, and thinks Stone and Wood Pacific Ale hits that perfect balance of being “distinct enough” yet extremely refreshing, he prefers drinking New Zealand beers.

“I think we have got the edge on the taste profile, particularly some of the late hop brewing that’s going on at the moment, which Panhead did quite well on Supercharger. We are quite good at picking up late hop freshness, and more sweet hop notes. I find it hard to find Australian beers with that same fresh hop nose.”

But Australian craft brands should not be worried about Moa taking a chunk of their pie. They are looking at taking market from the multinationals, both there and in their home country.

“To be honest, we work more with smaller craft beer brands than against them. We don’t sit around and talk about how we're going to take share from [small Auckland brewery] Bach Brewing or someone like that. We talk about taking share from [DB-owned] Monteith's, Mac’s and Heineken.

“Moa is 1.4 per cent of all beer in New Zealand, and we are a big guy. But why can’t that be 14 per cent? There is room for big brands in the craft category.”

You can read more of our coverage of the New Zealand beer scene here, and learn about Moa's sours program here.

nz our man in nz moa First, the Orange One takes the White House and now the orange one from Panhead takes out the inaugural GABS Hottest 100 Kiwi Craft Beers, ahead of Epic's Hop Zombie and Garage Project's Pernicious Weed. read on