When all the votes were counted, it was Panhead, Epic and Garage Project whose beers filled the podium places in the first GABS Hottest 100 Kiwi Craft Beers poll. While such things are, as much as anything, a bit of fun to get people thinking and talking a bit more about craft beer, there's no doubting the quality of the beers at the top – or indeed the regard in which the people behind them are held.

So, to round off our coverage of the inaugural poll, we got in touch with Panhead founder Mike Nielson, whose Supercharger finished top, Luke Nicholas from Epic, whose Hop Zombie came in second, and Jos Ruffell from Garage Project, who landed 19 beers in the list, including Pernicious Weed in third. Between them, we cover balance, cans, slamming steins of imperial IPA in China and, of course, hops.

Talking to Panhead founder Mike Neilson about the beers which made the Hottest 100 list, it is easy to assume which he holds dearest. He expected Port Road Pilsner to be the most popular when he founded Panhead in 2013. Quickchange XPA was designed to quench the thirst of craft beer nerds in warmer weather. But Supercharger APA, the beer that burned brighter than all the rest of the Hottest 100, is the one he speaks about the most.

Starting life as a home brew, Supercharger quickly became an all-conquering behemoth for the Upper Hutt brewery. Bartenders described it as "Wellington’s crack [cocaine]" as it popped up on tap across New Zealand’s bastion of craft beer. It took out the Society of Beer Advocates best beer award two years in a row. The fact you can find it littering the bushes in rural New Zealand’s public parks, side by side with budget brands, is not to be sneezed at.

The key, Mike says, is balance. “It wasn’t too malt forward or hop forward. Everything has to be in balance. But the hop flavour was key. It was about getting the right hop clarity. The flavours of those specific hops had to come through."

Panhead has grown at a spectacular rate since its debut; Mike and his investors selling to Lion in May did nothing to slow that down. The Upper Hutt brewery, based on a site that was once home to a Dunlop tyre factory, has been at capacity for some time. Currently able to brew 1.8 million litres per year, Mike says the next upgrade will see that increase by two million litres per year.

“It is really hard to manage that growth," he says. "In as fickle a marketplace as beer, you can be hot one minute and cold the next. Never in a million years did we think it could go, potentially, that big. There are a lot of people staring up that are wanting to sell a lot of litres of beer.”

The company temporarily handled the thirst for their beer in Australia by contract brewing there, but that has been put on hold. Mike saying there are not yet any firm plans to remedy the situation won’t help things – he says he is getting sick of Australians hassling him via Facebook for more beer – but he would prefer to brew in Australia to ensure the hop forward beers are in good condition when they get into the drinkers’ hands.

Panhead also contributed nearly a quarter of the 27 canned beers that made the Hottest 100 list. Mike says he likes cans, on the basis they are cheaper to use than bottles: that lower cost has enabled Panhead to sell 12-packs of cans cheaper than they could 12-packs of bottles. It would be easier for Panhead to bottle everything – its bottling line packages faster than its canning line – but Mike wants to be there for the beer can fans.

“At the end of the day, if we can do it and customers want it, then that’s just better for them.”

New Zealand beer drinkers love Epic Hop Zombie. It weighs in at 8.5 percent ABV, but people have been known to finish pints of the infamous IIPA in less than 15 minutes. Hoppy as hell, perfectly balanced and insanely drinkable, it is more than worthy of taking second place in the Hottest 100 Kiwi Craft Beers.

But you know where else they love Hop Zombie? China.

Epic founder Luke Nicholas (above right in a photo pilfered from Epic's Facebook page) is well versed at getting his beers across the world, with the biggest coup being an agreement to stock Epic Armageddon in Sweden’s government-controled off licence stores – the only ones in the country able to stock products containing more than 3.5 percent alcohol. But China is something else.

“I went to Wuhan [in September 2016] and turn up at a place to do a tasting," says Luke, "and there are guys drinking litre steins of Hop Zombie. People just love it. They just can’t get enough. Those guys chopped at least three steins while I was there.”

While most New Zealand breweries are looking to export to Australia, the UK or the United States, Luke says China is ripe for Epic or any other craft beer brand. He likens it to the birth of the internet, where everyone entering the space is on the same footing. Epic branding is already turning up in shopfront windows alongside big craft beer names like Dogfish Head and Mikkeller, while Hop Zombie and Lupulingus, another Epic IIPA, were both rated in the top 10 craft beers in China last year.

“It is really easy to export to China for the expat market, but I don’t want to be in that space. I want to sell to Chinese, because that’s a larger market," he says. "There is just such huge potential.”

Epic now has room to start servicing a bigger customer base. Steam Brewing, the brewery Luke uses to contract brew Epic, reached capacity more than a year ago, capping how much Epic could be produced. Thus Luke had to shelve all plans for seasonal and special releases, and even found it difficult to keep up with the core range.

But Steam getting an upgrade completed gave Luke space to let his creative juices flow again, with a glut of one-off and special beers released in the past year the result. Four of those – Thor, Stone Hammer, Thunder and Dankomatic – made the Hottest 100, showing New Zealand drinkers are still loving what Luke is throwing down.

The Stone Hammer series – Thor, Stone Hammer and Thunder – is something of a homage to Epic sales rep Sten Hansen. Of Danish descent, Sten and Luke came up with the idea over a few beers at the pub when talking about how to make it easier for Sten to sell beer. His middle name is Thor; Sten translates to stone, and Thunder became the name after Sten and Luke went to an AC/DC concert.

The same thought process extended to St Luke, a beer Epic brought out to celebrate Luke’s 20th year of brewing. Combining three beers which have won him multiple awards – Epic Pale Ale, Epic Armageddon and Monk’s Habit from the defunct Cock and Bull – it serves as a homage to a man who is New Zealand’s undisputed king of IPA. Although one person was worried Luke was self-ordaining himself, much like the infamous Bishop Brian Tamaki from the controversial Destiny Church.

“All of my stuff comes from some deep, dark, humorous place in my brain that goes, ‘Ha ha, that would be fun, why not do it?’," Luke says.

“It’s just me being silly. It’s just a bit of fun. I think beer should be fun.”

It was perhaps to be expected. New Zealand’s most prolific craft brewery dominating the first NZ Hot 100 with 19 beers in the list, including five in the top ten.

Wellington’s Garage Project are something of an unstoppable force in the New Zealand beer scene, and for the past three years running have taken out the Brewery of the Year award in the awards hosted by Kiwi beer appreciation group Society of Beer Advocates (SOBA) while picking up countless medals for their beers.

As regular GABS stallholders in Australia before the festival crossed The Ditch, co-founder Jos Ruffell says seeing the Hottest 100 concept make it to New Zealand could only help raise the profile of craft beer on Kiwi shores.

“We think beer should be fun and inclusive," he says, "so anything that encourages participation and brings a little drama and show is a great thing in our mind.”

While being pipped for the top spot by Lower Hutt’s Panhead, Jos was more interested in seeing how many votes they gained in total, rather than nabbing the number one position.

“We release at a fairly prolific rate and it's always impossible to pick the response to a particular beer. Certain beers do polarise people, which brings strong fans… and then there are the occasional beers that come along and seem to have the stars align around them,” says Jos.

For a list heavy in pale ales and IPAs, it played well into the Garage Project wheelhouse, with their Pernicious Weed Double IPA coming in third, with other hop forward brews Death From Above, Garagista, Party & Bullshit, and Lupus the Wolf Man all featuring high up the list.

That spread matches up well with Jos’ experience of the Kiwi market.

“They really do represent a huge group of the current 'go to beers'," he says. "We love brewing all manner of styles and having a list that isn't just all about the hops.

“Having said that, we love them as well and have certainly enjoyed putting out a number of new hoppy releases over the last year or so. When we picked up nine medals in the 'Pale Ale/IPA' category at the last NZ Brewers Guild Awards, it really brought home just how many hoppy beers we have in semi-regular rotation.”

While their distribution and number of beers entered certainly would have helped, Jos believes the list rewards consistency and quality regardless of brewery footprint.

“The Australian list has shown [the benefits of distribution], but also the ability for newcomers with outstanding beers to rise up the ranks quite swiftly. It feels like the list really represents and rewards quality and consistency of go to, core range beers.

“For smaller breweries, and we can certainly identify with this, they are often not brewing the same smaller range of beers constantly. So we can see the challenges for those breweries to get traction on the list, but it shouldn't take away from the energy and excitement that they are bringing to the scene.”

You can view the full countdown here and our analysis here. The 2018 GABS Hottest 100 Kiwi Beers countdown saw a big increase in hazy IPAs, a few debuts and a big presence for beers from the big man behind Behemoth. Here, Jono Galuszka chats to the people behind some of those stories. read on 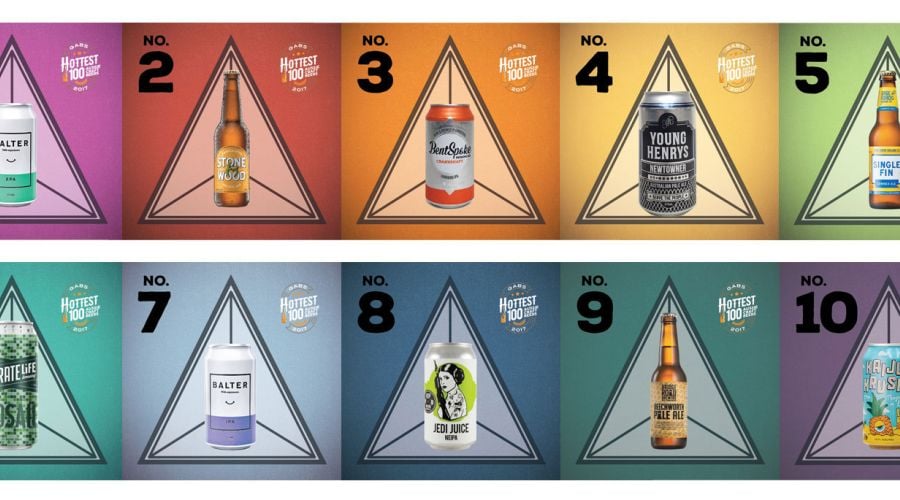