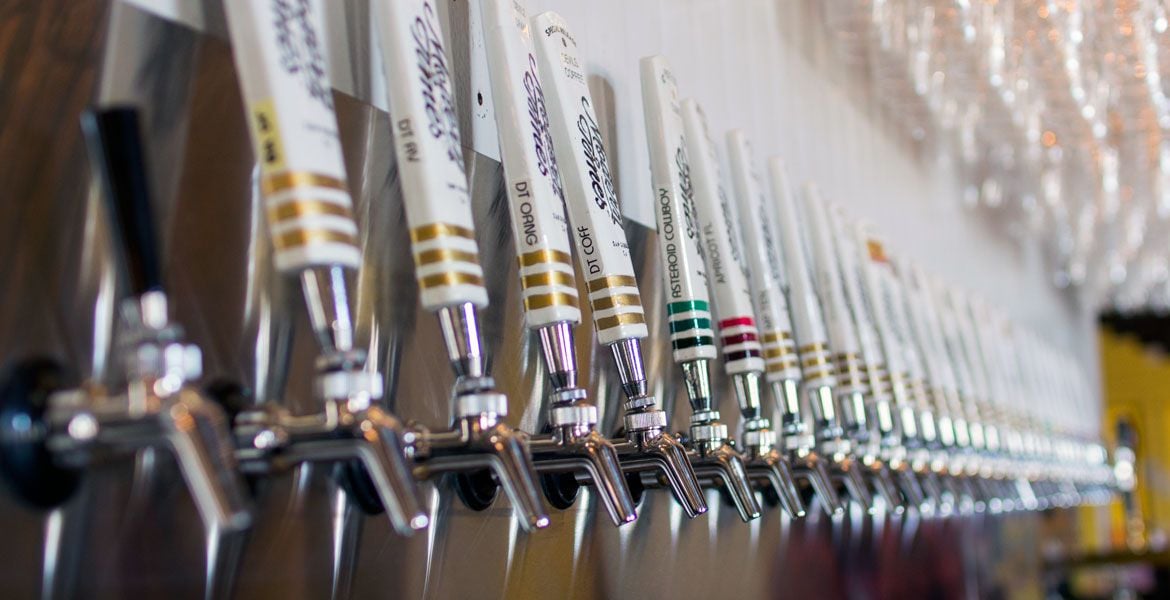 Usually, when Aussie beer lovers embark on a beer pilgrimage of the States, they give themselves several weeks in which to become totally immersed. But what if you've only a fraction of that time?

Award-winning blogger Marie Claire Jarratt of New South Ales found herself with 12 hours to spare after a conference in San Diego. Just how much of the city's incredible beer scene could she cram into that time? Rather a lot, it turns out.

San Diego County is often referred to as the craft beer capital of America. It’s home to more than 100 craft breweries, many of which are consistently rated amongst the best in the world. Here, craft beer is less of a hobby and more of a culture. Cafés serve beer alongside (or perhaps in lieu of) a morning coffee, streets are named after brewing terms and even restaurants of the most dubious quality serve award-winning beer on tap.

I was in town for a conference, but now that’s over I find myself with an afternoon to spare and a plethora of breweries to visit. Not unlike a small child in a candy store, I have enthusiasm bordering on delirium, but limited resources. In this case, time.

That’s why I’ve spent the past few days intermittently pouring over this map from the San Diego Craft Brewers Guild, working out an optimal strategy. Balancing the equally important values of proximity, prestige and price of Uber rides, I’ve come up with just one of many ways to spend 12 hours exploring the craft breweries of California’s southernmost city.

When people claim America does things bigger and better, they could well be basing it off their visit to Stone’s enormous production facility in Escondido. As the tenth largest brewery in the United States, the volume of beer produced here is nothing short of phenomenal. Each fermentation tank is massive and, as a brewery tour will helpfully point out, contains enough beer to provide a (very thirsty) customer with a six pack of beer every day, for a year.

The facility is so large that brewery and packaging line are housed in two different buildings, separated from one another by Lupulin Lane. That name is fairly apt, given how much Stone love to use hops. Out of their core range, only one of their beers is not a IPA. If not heavily hopped, many of their other beers share other strong flavour characteristics, with prefixes like “imperial” and “barrel-aged” not all that uncommon.

Despite the somewhat aggressive nature of the beers, the eco-friendly location has quite a tranquillity about it. The tasting room is combined with a farm-to-table restaurant that backs out over almost an acre of nature. Cobbled walkways, ponds and eucalyptus trees (introduced to California by Australians) make for one heck of beer garden, especially in San Diego’s perpetually sunny weather.

In contrast to the hop-forward beers of Stone are the malt-dominant, yet equally as intense, beers of AleSmith. British and Belgian styles are given an American twist, which generally means ramping everything to the extreme. A typical tasting paddle (which isn’t wooden, but rather resembles a wrought iron gate, a nice testament to the brewery’s name), will easily consist of beers reaching over the 10 percent ABV mark.

Despite their high alcohol content, the beers still manage to display a high level of quality and complexity. After all, the man in charge, owner Peter Zien, is a certified Grand Master Beer Judge, responsible for creating a number of highly-decorated beers. These offer the true beer connoisseur an excellent opportunity to take their palate to the extremes, but also allow a more casual drinker a chance to experience some more unusual flavours.

The venue itself hasn’t wasted any effort on distractions. The interior is sleek – little more than a gaping expanse in an industrial unit. Then again, that’s all that’s necessary to ensure the focus remains entirely on the beer.

Many of San Diego’s current craft breweries can attribute their success to a solid foundation of beer knowledge and experimentation, laid by a homebrewing scene that blossomed in the 1990s. At the centre of this community was Jack White, owner of supply and ingredients store Home Brew Mart. After many years watching his customers start breweries of his own, he tried his hand in the business, thus Ballast Point was born.

Since then, it has grown to epic proportions, with four locations in the San Diego area. Now, they’re all owned by Constellation Brands, which purchased Ballast Point for a cool USD $1 billion back in 2015 – the largest purchase in craft beer history. The production facility in Miramar is the largest of these four, home to a nautically-inspired restaurant and terrace. It’s been decked out (if you’ll excuse the pun) with wood and rope to loosely resemble the inside of a ship. Former head brewer Yussef Cheney’s love of fishing inspired the theme, as well as the names of many of the beers, which are named after fish or fishing terms.

Staying close to the brewery's homebrew roots, these beers are mainly brewed true-to-style, although many foreign varieties are given a Californian character with the addition of native hops, summer fruit syrups, or even Habanero peppers. Ballast Point’s R&D beers, only available on tap at the four San Diego locations, show more of an experimental side. Here, additions range from wild and sour yeast strains, to native herbs and oriental spices. Although these may seem somewhat gimmicky, it allows every employee, brewer or not, to suggest a recipe and try their hand at the kind of homebrewing that made Ballast Point famous.

Another product of San Diego’s homebrewing scene is White Labs, located on Candida Street. As the name may suggest, this location is less of a brewery and more of a laboratory. To be precise, this laboratory produces pre-packaged, ready to use liquid yeast for homebrewers and professional brewers. Initially, the range consisted solely of WLP001, Californian Ale yeast, but has since grown to more than 50 distinct varieties, many of which are used by Australian brewers.

Here, there’s a novel approach to the brewing operation, which merely occurs on the nanoscale. Each 300L batch is split up and fermented with a different strain of yeast. The batch is sold as a flight, consisting of around four different beers, all in the same style, but containing four different yeasts. Thus, one can determine whether it’s WLP300 Hefeweizen Ale Yeast, or perhaps WLP080 Cream Ale Yeast, that gives the desired flavours in a Wheat Ale. For a homebrewer or anyone interested in the brewing process, this is a fascinating opportunity to learn about beer’s most under-appreciated yet most magical ingredient.

One of the newcomers to the scene, Modern Times was founded in 2013 by former Stone Brewing social media manager Jacob McKean. Somehow, he convinced the public of San Diego to loan him $65,000 via Kickstarter so that he could open his own brewery. Not only was this a difficult feat in itself, but it was compounded by a rapidly saturating market. McKean promised his backers that a team of thoroughly experienced brewers, many of whom worked at a few of the locations mentioned above, would produce unique beers the likes of which San Diego hadn’t seen.

Boy, did he deliver. The core range consists of a hopped wheat, amber IPA, Belgian farmhouse and coffee stout (made with in-house roasted beans), but the limited releases only get weirder from there. This author’s fridge, for example, currently contains an imperial, barrel-aged stout infused with orange zest, hazelnut and cocoa nibs. “Styles don’t matter,” is the brewery’s simple philosophy.

Just seven months after opening, Modern Times was named among the top new brewers in the world. If that wasn’t enough to draw crowds into the “Lomaland Fermentorium,” then the quirk of the place certainly did it. Among many other oddities, such as retro designed taps (see cover photo above) and gallon drum tables, is a 12,000 post-it note mural of Michael Jackson and his pet chimp, Bubbles.

While I wish I'd had more than 12 hours to work my way through all 100 San Diego breweries, five proved my limit. Here's ten other options – both old and new – that those with more time are highly encouraged to check out: 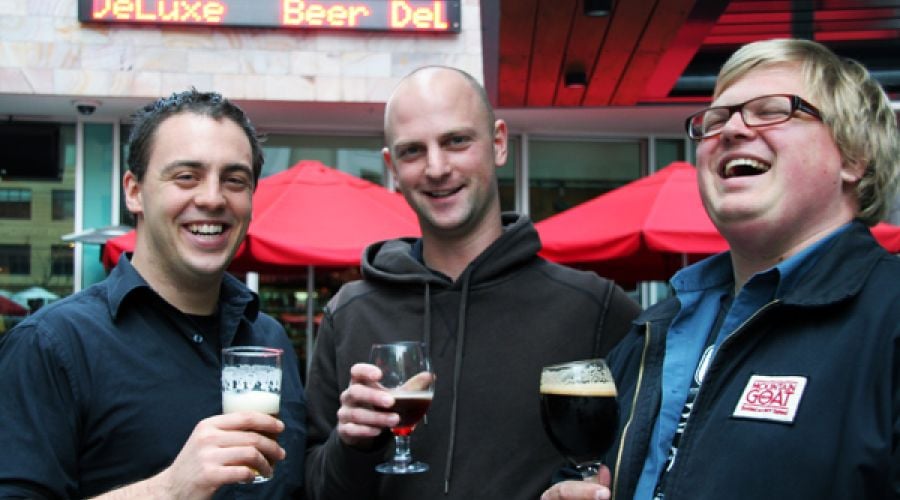