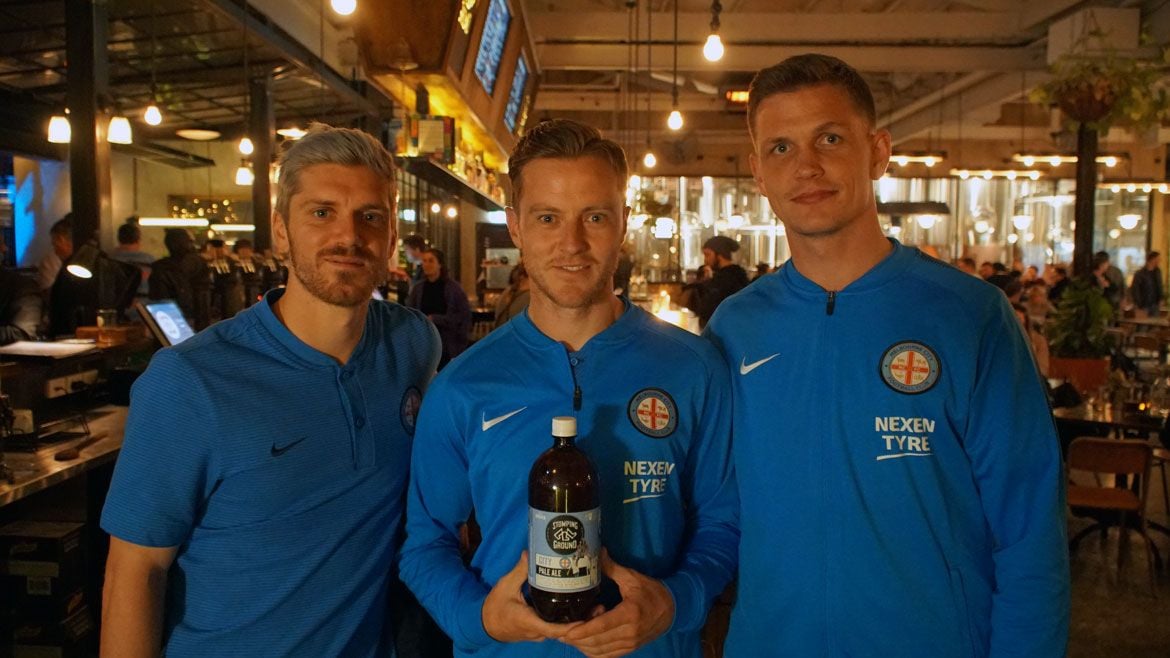 Melbourne brewery Stomping Ground has struck up a partnership with Melbourne City FC, brewing a beer for the club as it launched its 2017 FFA Cup campaign. The tropical, fruity City Pale Ale was tapped as players, club staff and fans gathered at the brewery's Collingwood home last week and is the latest win for independents looking to gain a toehold in an area of Australian society traditionally dominated by the major brewers.

Earlier this year, we reported on Colonial's partnership with Essendon, BentSpoke pouring beers within Canberra's GIO Stadium and Hawkers' ongoing relationship with VFL club Northern Blues. Now, while just a single batch of the City Pale Ale is currently planned, there is every chance this is just the first step in an ongoing relationship.

Brewery co-owner Justin Joiner says: "Part of the Stomping Ground ethos is to celebrate Melbourne culture and sport is right up there with the arts and everything else we celebrate. Partnering with a sporting team is something we've always wanted to do.

"It's about community engagement on all levels. We've got a staff member who plays for the Brunswick Zebras and sponsor them with kegs for each game."

The collaboration with the club that's part of the global City Football Group came about following discussions between mutual contacts, including broadcaster Francis Leach, who is a regular at Stomping Ground's sibling business, The Local Taphouse in St Kilda. The club was keen to celebrate last season's FFA triumph and find somewhere to hold a launch for this year's campaign, which kicks off on August 1, and the brewpub offered the chance to do both.

"Being a fan and member focused club we wanted to do something to give back to them before the season," says City marketing director Nick Becker.

Before joining the club, Nick spent eight years working in the Premier League in England, where Tottenham Hotspur announced earlier this year that its new stadium would include a microbrewery.

"I'd love to see craft beer in all sporting stadia," he says. "There's the US model where they do it quite well and it's starting to get into some of the Premier League clubs; Brighton has its own beer [brewed by Harvey's]."

Stomping Ground co-owner Steve Jeffares believes brewing a beer for City fans – even as a one-off available at just half a dozen venues associated with the club's fans around Melbourne – gives the brewery a chance to introduce new people to their brand and craft beer generally.

"This is another opportunity like PRIDElweisse [the hefeweizen brewed in collaboration with Midsumma Festival last year] and gets 60,000 fans talking about Stomping Ground beer," he says. "Most of us here are pretty sport mad and there's certainly a number of things we are hoping to confirm in the coming weeks that we will be doing with Melbourne City."

Should those be confirmed and the partnership flourishes alongside those struck up by other small breweries, where might it lead?

Says Nick: "At the end of the day, we should have the full range [on offer at sporting events] – the large global brands but also craft beer as an option. That's hopefully the way the whole industry is going.

Echoing the words of many in the craft beer world, he adds: "It has to be the people that change it. Fans have the power to change it."