The unicorn is often unfairly maligned by anyone who’s not a hippy or a children’s picture book author. Just ask Blasta Brewing owner/brewer Steven Russell, who has used the mythical creature – in geometric form – as the logo for his Burswood-based operation.

The enthusiastic Scottish born FIFO worker and homebrewer turned pro will tell you the mythical creature symbolises the purification of water; in Blasta’s case, the unicorn logo and its water cleansing lore present a refreshing and unique image, counteracting the demons and evil monsters favoured by some other brewers. Also refreshing is Russell’s approach to doing things at his soon to be open Burswood venue.

More than just a taproom beside the fermentation tanks, the intention is to make Blasta Brewing a community brewpub with a real sense of place. Graham Frizzell sat down with Steve to talk about everything from studies on the importance of pubs within the local area to German hefeweizens. With MyWay Grapefruit IPAs in hand, there have been a few unicorn sightings too…

I’m an engineer by trade working for an oil company. I started homebrewing only two years ago; I have a passion for both cooking and drinking good beer. I thought the two go hand in hand and decided I’d go and buy some brewing equipment for Christmas with a little help from my wife!

I’m a bit of a perfectionist when it comes to food, which has carried across to making beer. My first brew was a German hefeweizen. I’d just got back from holiday over in Europe and I had been drinking a lot of wheat beers in Germany.

It hasn’t taken a long time to go from homebrewing to being completely hooked. It’s good to have a passion and follow your dreams. I’m not driven by money. Passion comes first. My work is to brew a batch of beer, meet people who come to my venue and I get to see them smile… There’s really nothing better than that!

How did you transition from homebrewing to a commercial-scale operation?

I was at work one day on Barrow Island and one of my colleagues said to me: “You know, as a homebrewer, you’re going to end up wanting to brew more and more.”

At that time I said: “No no, it’s purely for myself. I have no interest in going any further than that.”

But the first time the idea of brewing commercially came into my mind was at a homebrewing competition at one of the local bars. The idea was to make one of five BrewDog beers. I made a clone of Punk IPA and it won its segment. One of BrewDog’s master brewers had flown in from the UK and he gave me a bit of encouragement to start experimenting further.

Approximately six months later, I put two beers – a wheat beer and an IPA – into WA’s amateur brewing championship. The turnaround time from grain to glass was 12 days so I knew they would under-carbonated. They hadn’t even reached terminal gravity at that stage but I wanted feedback from the judges on the rest of the technical aspects and their flavour.

They came very close to making it to the Australian finals – one came fourth and the other fifth – less than half a point each from making it. All four judges came back with feedback saying they were both slightly sweet for style and under-carbonated and that’s where points were knocked off. I knew having a few extra days I would have done pretty well with them.

Was there a beer or moment that sent you on the path to becoming a brewer?

When I had my first experience of good beer and what it’s all about I was drinking a Weihenstephaner hefeweizen. It’s only when you properly take the time and drink a beer in the same way you’d drink a wine, you start to appreciate the different elements of it.

The first pale ale I made I tried to brew a clone of James Squire 150 Lashes. It came out pretty well. I started with single hop and single malt beers and elaborated from there.

What beers have you released so far?

The very first beer we released was MyWay Grapefruit IPA, coming in at 5.9 percent and 45 IBU. It was brewed with four different hop varieties, including Citra. There’s a huge amount of grapefruit and blood orange in it too.

The next beer I released was Grimster Rocks, a Mosaic hopped APA. Its dominant flavour is Mosaic [hop driven] so it’s a bit dank, but it also has flavours of passionfruit and melon. I wanted to use some Australian hops as well so it’s got a bit of Galaxy hops in there too.

We’ve also brewed Chainbreaker IPA, which is effectively the MyWay IPA from a base malt point of view. It’s the same percentage, it uses the same malts but it has a different hop profile. It’s double dry-hopped and [the result] is a bit more resinous.

And we’ve just released a German hefeweizen called the German Heff. Petition Beer Corner is the first place to have it on tap. Think Weihenstephaner [Hefeweizen] but with more stonefruit flavour, which is the result of using two different yeast strains.

What beers are in the pipeline for future release?

I’ve been brewing a second hefeweizen with the same profile [as The German Heff] but with just one yeast [strain], imported from White Labs in the US. This one is tangerine infused, much like the grapefruit one, and Dad came up with the name: Tangerine Dreams.

The next beers I’d like to make are a mid-strength, helles lager and I’d like to make a European lager closely aligned to the Polish style. My wife’s Polish and there’s quite a few good Polish beers out there. It changes every week though!

Where have you been brewing and where will you be brewing now the site is all ready to go?

I’ve been contract brewing with Newstead Brewery, The Last Drop and Wedgetail Brewing down in Mandurah. I bought my Grainfather from Neville Ash (Wedgetail Brewing) who also runs Online Brewing Supplies and I’ve been friends with him ever since.

We now have our Burswood brewhouse, which will have a 23,000 hectolitre capacity; [the system is] on order form the US. We’ll also have seven fermentation vessels, two [bright brewery tanks] and a cool room with a capacity to hold quite a substantial number of kegs. At our Burswood venue we’ll be able to sell fresh beer on site as well as supplying beer to bars around Perth. We’ll have a canning line too.

What can punters expect from the Blasta brewpub when it opens next year?

The beer will, of course, be the main bit, but it’s going to be a family venue, relaxed and a place where people can get real value.

One of my major investors' brothers is wheelchair-bound so we decided to get our own people mover with a hydraulic lifter. We can pick up patrons from key locations like the airport, Lathlain or the city; and we’re going to have Blasta signs all over it too!

As part of my public interest assessment and development application I researched a report from Oxford University’s Robin Dunbar entitled The Role of Pubs Within Your Community. I genuinely want people to come in, be relaxed and feel like a real part of it. It’s going to be interactive. People who turn up on a Tuesday, for example, will eventually feel like they’re a part of the company based on their involvement. We’ll have a free meeting space for students who can come in, plug in their laptops and use the wifi as well.

What’s the inspiration behind the brewery name and logo?

Our mission statement is “Every day make delicious beers.” The name derives from Scottish-Gaelic and it means “delicious!”

[The unicorn logo] was inspired by the water-cleansing story. Everyone in the older days believed that unicorns had the power to purify and cleanse water [then not safe for consumption]. It ties in perfectly because our beer is going to be as pure as you can get.

Believe it or not, it’s all Blasta! But I have to admit I have a soft spot for Bell’s Two Hearted Ale. Whenever I can find this IPA I always get it. I also like Polish lagers like Zwyiec and BrewDog 5AM Saint.

What would be your “Death Row” beer?

BrewDog: Paradox Islay. I like whisky as much as I like beer and loved the complexity on it.

If your brewery were a band, what would it be?

It would be Kasabian! It’s the sort of music I’d like to listen while brewing. Indie, but uplifting.

Where would you like to see Blasta in ten years time?

I’d love to see Blasta as a staple of the WA community. If people then are still saying Blasta beers are as good now as they were then, that’s good enough for me.

Coming up there’s Freo Beer Fest where we’ll be taking part in the Cocktail Gastronomy event. In The Vines there’s a cancer research charity event where we’ll be doing a meet the brewer and giving people free beer as part of the event. I like to give back too.

Thanks, Steve! We look forward to the Blasta brewpub in full swing early next year. 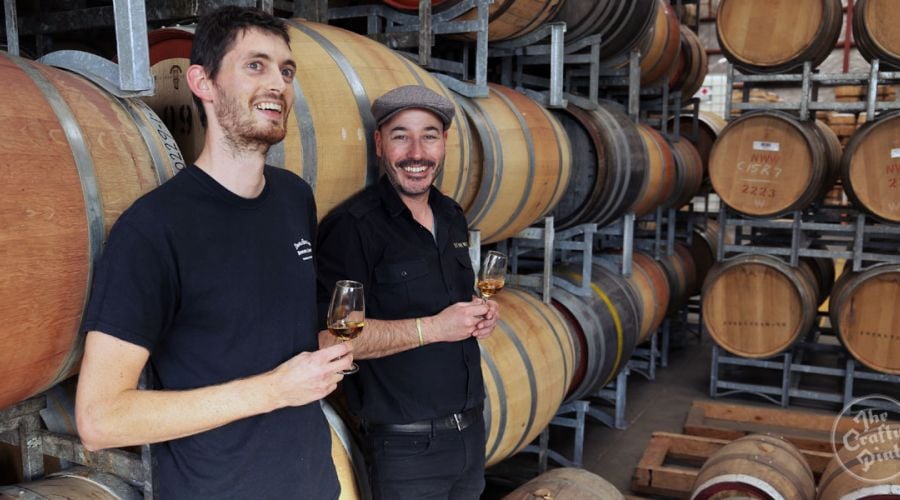