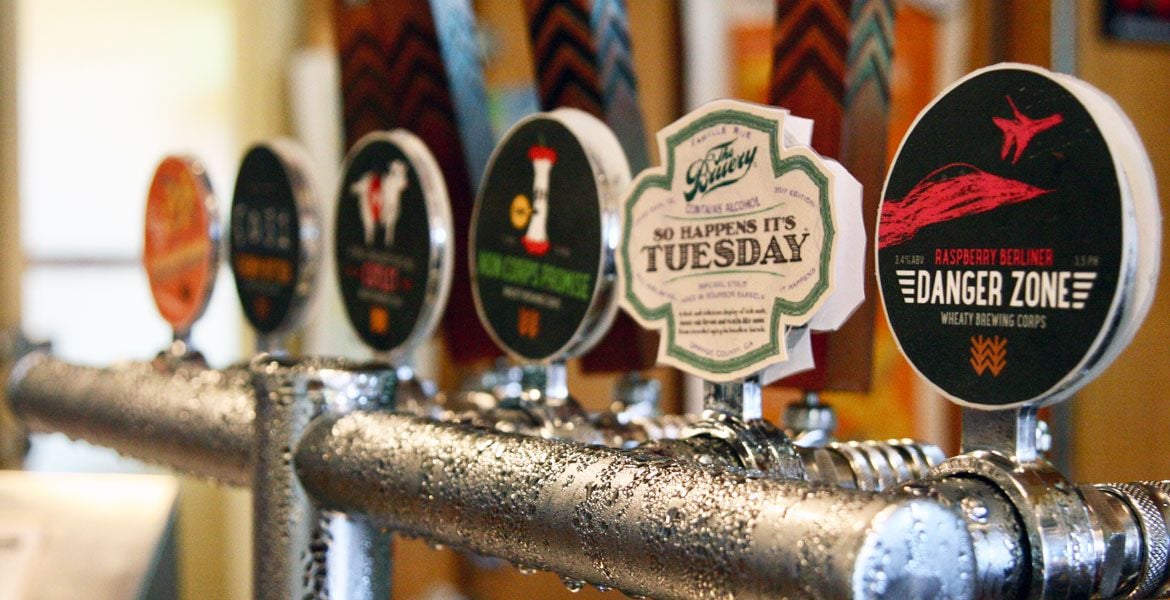 When Jade Flavell, Liz O'Dea and the late Emily Trott took over the Wheatsheaf Hotel in 2003, they had a simple vision: “It was all about creating a pub that we'd want to go to,” Jade says.

Fortunately, the trio were excellent judges of what made a good venue and the “craptastic” Thebarton pub with a welcoming atmosphere quickly developed not only into one of Australia’s best venues but also a pioneer when it came to introducing Australians to good, independent beer.

There were only a handful of South Australian breweries back then, so many of the kegs they sourced in the early days came from interstate and overseas. Their efforts saw The Wheaty become renowned as a venue where you could try beers that weren’t available anywhere else in the state – or, sometimes, anywhere in the country.

Visiting brewers noticed, and regular tasting sessions and masterclasses – plus some of the country’s earliest and most colourful collaborations – cemented The Wheaty’s reputation as a hub of the local craft beer community. Add in regular live music and comedy in the shed to the rear, an expertly-curated lineup of whiskies and some of the most knowledgeable staff going and it made for quite the package.

For Jade, who is now the sole publican, that was just the beginning, however. While she introduced beer drinkers in Adelaide to many of their favourite breweries, her goal was never simply to pour other peoples’ beers.

Instead, as she puts it: “The end game is to make your own and be master of your own destiny.”

Thus it was that in 2014 they established a 600 litre brewery onsite and, although 99 percent of Wheaty Brewing Corps beer is poured through The Wheaty’s own taps, demand quickly outgrew the original setup. After several expansions, the brewery now takes up 70 square metres at the rear of the venue, beyond the band room, with three single fermenters, three double fermenters and a double bright tank filling the original space plus “Fermentation Alley”. An additional double bright tank and a foeder that’s due to arrive soon will take the brewery’s annual capacity to 140,000 litres.

With that amount of beer flowing through the venue’s bar, deliveries of kegs from elsewhere have slowed down significantly in the last five years, with those that do arrive typically timed to coincide with the launch of a collaboration brew with a guest brewer.

Ironically, despite the pub's beers coming predominantly from one source, there’s often more variety on tap now than there was before: from a growing collection of sours, pilsners and IPAs to beers made with all manner of unlikely ingredients. In half a decade, the brewery has pumped out around 100 different brews; as Jade points out, there’s "an extraordinary range of styles that we seldom had when we were pouring other people's beers."

Even more importantly, rather than asking other breweries what they have available, Jade and her brewers – Rose Bartholomeusz and Steph Cope, who Jade says “do all the hard work” – can decide what’s on tap at any given time. Instead of waiting for someone to make a NEIPA and letting it lose flavour in transit, for example, they created Yeast Coast (an evolving collab with Modus Operandi and Fixation) so it can be served as freshly as possible. In collaboration with Three Weavers (USA) and Buxton Brewery (UK), they made what they believe to have been the first commercially-brewed Brut IPA in the country.

“We can literally have a chat about a recipe, develop it, brew it tomorrow and drink it in five weeks. Very few other breweries, even small breweries, can do that,” Jade says. “So why on earth would I trade that for pouring some Kiwi IPAs or some American NEIPAs? It doesn't make sense.”

Building a brewery and brewing beers within it that have been good enough to take out a Champion Small Independent Brewery title (at the 2017 Craft Beer Awards) is only part of the reason almost all of the taps are now dedicated to the in-house creations.

Today, there are other options around Adelaide for drinkers looking to sample crafty offerings from local, interstate and international brewers so, just as the trio blazed a trail back in 2003 by serving up something new and different, by switching the focus to being an innovative brewpub Jade continues to deliver something drinkers can’t find elsewhere.

Of course, there’s still room for tap takeovers and comparative tastings, and keeping some taps open lets Jade pour beers that she can’t (or won’t) brew in-house. And, while she takes her beer very seriously, the brewery is also a playground.

It’s a chance to make “silly beers” like the Ice Coffee White Stout that has become a tradition every Father’s Day. Moving 12 kegs of “quite strange, boozy, sweet beer” would be a challenge for most suburban pubs. At The Wheaty, it sold out in ten days.

The brewpub setup is also one that allows brewers to present beer at its best; at The Wheaty, that might mean when it’s fresh, or when it’s been aged to the point they want it, or when the occasion demands a certain beer make an appearance. Just as importantly, it means visiting brewers can join in the fun. About half of the beers to date have been collaborations, with dozens of brewers from here and overseas welcomed into the brewhouse – not to mention our own Crafty Cabal.

And guests’ contributions often continue after the beer is poured.

“When we collaborated with Wildflower, Topher [Boehm] brought some of his culture and we mixed it with our Wheaty French saison,” Jade says. They’ve kept that mixed culture going, and the plan is for guest brewers to add to it. At time of writing, it had welcomed yeasts and beasts from Wildflower, Bridge Road, Fixation and Wheaty Brewing Corps, and Jade lights up as she talks about it.

"It's this living thing that keeps evolving, and it's part of everyone who's been here."

Put that way, it sounds a lot like the venue where tradies enjoying knock-offs can rub shoulders with federal politicians and sampling some of the best beers in the country.

“The pub's a living thing and it's only as good as its people,” Jade says. “It's always changing, it's always evolving. And that's a good thing."

The Wheaty crew are celebrating their 16th anniversary throughout the weekend of May 25/26. Details here.