"We just wanted a place in Geelong where you could drink Rodenbach Caractère Rouge."

As far as goals go, it has to be among the noblest. And, as far as first impressions go, they don't get much better.

It was with those words The Crafty Pint was introduced to Big Ears, a Geelong bar dedicated to good beer and tasty meatballs. Or, as the graffiti on the walls says (at least for now, as it changes regularly): "COLD BEER HOT BALLS."

UPDATE: Not long after this was published, there was a shock announcement that Big Ears was closing as they couldn't secure their premises. Given they had events locked in weeks ahead, this clearly came as a surprise. Here's hoping the team finds a new venue...

Located on Little Malop Street, a once largely neglected part of Geelong that in recent years has been transformed into a dining and drinking precinct, Big Ears has been championing good beer along the strip since it opened in 2018. Along with Blackman's Good Beer Bar, Big Ears has made those few blocks all the more crafty, with six taps and a tap list of around 80 bottles and cans that's constantly changing.

But ever-changing beer list isn't the only way in which Big Ears aims to bring better beer too Geelong locals: it's by educating too. Whether this is achieved through one of the most creatively categorised beer lists out there (more on that below), Cicerone cards that can be found at the bar, or their regular beer classes, education is at the heart of what the bar does.

When did Big Ears open, and whatʼs the ethos of the the venue?

Big Ears celebrated our first birthday in July! And, over the last year, weʼve developed a philosophy based around three simple things: hot meatballs, cold beers, and good times. Our customers come for Mama Joolzʼ comfort food, and stay to experience the weird and wonderful of craft beer world.

Whether youʼre a seasoned beer drinker searching for a barleywine or a barrel-aged stout, or just spreading your wings in craft world, our knowledgeable bar staff take pride in selecting the perfect beer for you.

Whatʼs the reaction to the venue been like locally?

The local community's reaction has mostly been curiosity! Weʼre doing things that no one this far west has been game to try yet. Our meatballs menu runs on a "build your own plate" concept, and our bottle list can boast up to 80 beers at a time.

How is popular is craft beer in Geelong? How's it changed over the years you've been working in beer?

Geelong has a wonderful craft beer community! And everyone is doing something unique. I have been lucky enough to come full circle, by starting my beer career at Little Creatures Brewery and ending up at Big Ears four years later. So Iʼve watched it grow from the breweries and barrel hall opening, to Furphy being born, to being able to get a kettle sour at nearly every bar!

As Geelongʼs population gets bigger, so does the demand for quality products and new experiences. Geelongʼs beer and bar community is committed to working together to bring booze to the people.

What are the bar staff drinking at the end of their shifts?

Each of the staff have a different taste, and thatʼs what makes getting recommendations of each of us unique. You can usually find me smashing back a Rodenbach Alexander, Tyler's current favourite is Quiet Deeds' Vanilla Porter, head chef Joolz loves anything hazy, and Brooke is low key obsessed with Okinawa Sour by Temple.

Are there any beers you use to convert mainstream beer drinkers when they walk through the door?

Our beer menu is constantly rotating, so as to show off whatʼs on offer in craft beer world, so there isnʼt one particular beer we use to convert, but there are sections of our menu.

The "I Just Want A Beer, Mate" section is full of lagers, golden ales, and draughts, and the "But I Donʼt Like Beer" section shows off a selection of fruit beers and craft ciders. As our customers get more curious, they might move onto "A Bit More Adventurous" or even "Sour Power"! We believe everyoneʼs beer journey is unique, and weʼre here to guide you.

How about other techniques? How do you introduce newcomers to craft beer when there are so many styles out there?

Big Ears will always have a eclectic selection of beers on our six taps, so weʼre able to offer tasters of different styles to see what the customer is vibing with before we move onto the bottle list. In particular, itʼs a common technique of ours to offer a taste of a fun kettle sour on tap to those who ask for wine or cider. Nine times of out ten, we can convert a customer to having a beer instead!

Big Ears is also passionate about taking the apprehension of entering craft beer world away from the general public. So we offer several classes such as Beer 101 and Beer Diploma, and a monthly Beer Klub which focuses on a different style each session. Our vision is to have a safe space in which people can discover that beer isnʼt all draughts and lagers! (Not that thereʼs anything wrong with those.)

What beers have been blowing your mind lately? And which local breweries are exciting you?

Lately, Iʼve really been enjoying the crossover of beer and the rest of the booze world. The ingenuity of brewers employing their knowledge of or connections with wine and spirits is really changing the game. Weʼre finding and enjoying that we need to brush up on our wine, spirits, and barrels knowledge to keep up.

Some of Geelongʼs local breweries are at the forefront of this trend, such as Blackman's Brewery Barrel Farm teaming up with Bellarine Distillery or White Rabbit teaming up with Starward Distillery and Provenance Wines, and weʼre loving the results!

I think the next big thing in craft beer will be vintages. Already in Australia we have so many wonderful breweries experimenting with wild fermentation and barrel ageing such as La Sirène and Wildflower, as well as yearly releases of crowd favourites like the Tusk by Feral or The Kalash by Hop Nation.

This trend opens up the possibilities of moving away from having every single beer taste exactly the same every time it is brewed. We already know brewers are constantly tweaking their recipes and, in my opinion, this is something to be embraced instead of hidden. Not only will we be beard-scratching over the taste of the beer, but weʼll be comparing it to previous batches!

Where do you think beer is headed?

Beer is headed towards a place of both more accessibility and variety. These days, the average beer consumer is so much more informed of the brewing process and beer styles, theyʼre not only keen to try many different things, but itʼs keeping us beer professionals on our toes to deliver both quality and ground breaking products.

The most wonderful thing about the Australian craft beer industry is its diversity: there is literally something for every palate, and as punters embrace this we will see more weird and wonderful styles at every bar.

Whatʼs next for Big Ears?

Big Ears is committed to making our second year in business bigger, badder, and boozier than before. Weʼre constantly meeting with breweries and importers to stay in the know, and bring you special kegs that wouldnʼt usually make it to somewhere this regional. Weʼre also running monthly brewery takeovers and Beer Klubs, as well as an array of private classes available for beer fans of all levels.

Come have a beer and have a ball with us! Cheers, Big Ears!

Big Ears is at 86 Little Malop Street, Geelong (a five minute walk from Geelongʼs main train station). You can see what delicious beers they've got in by heading to their Facebook or Instagram.

Articles by Will
behind bars geelong big ears 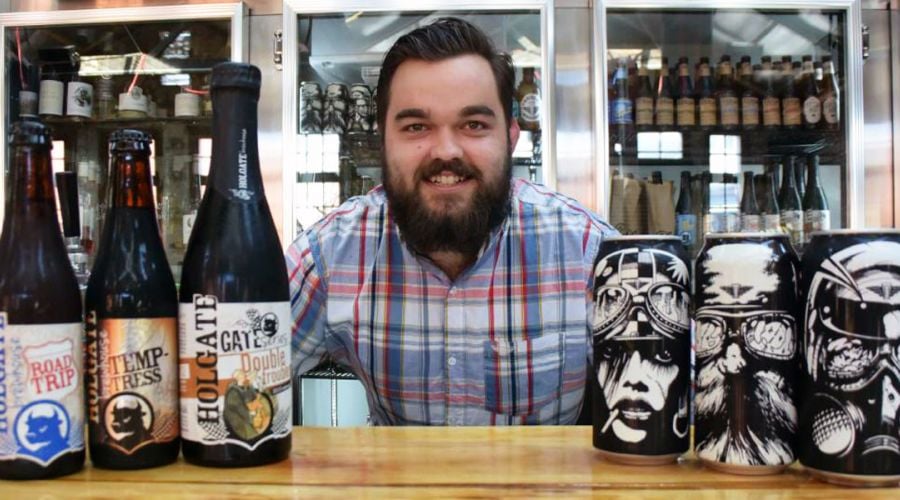