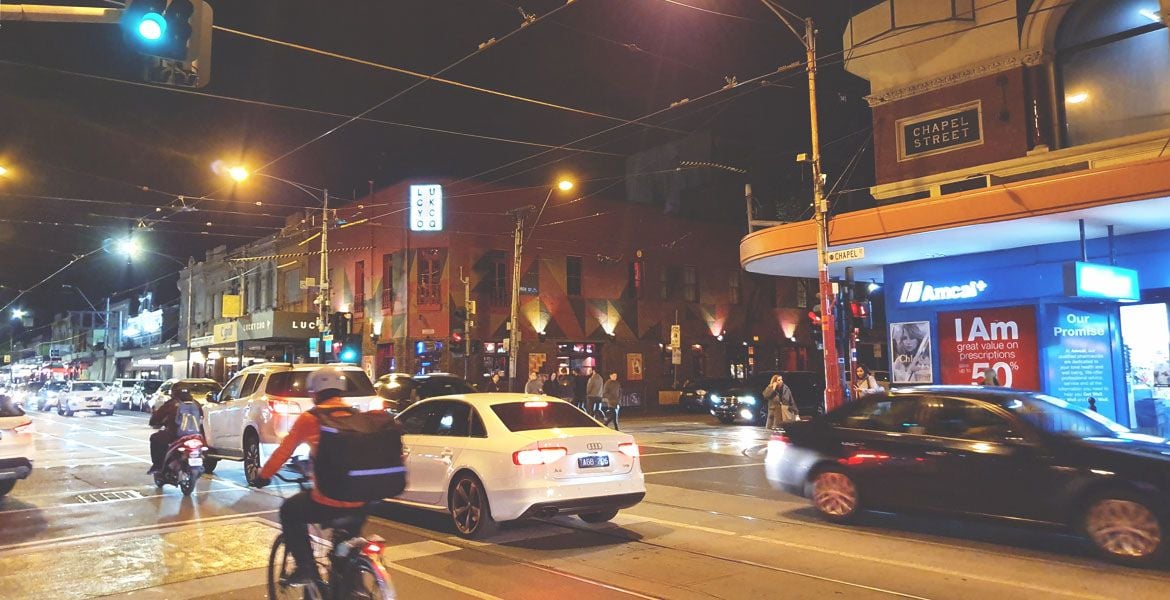 The Chapel Street precinct may have a reputation as something of a shopper’s hotspot, but these days it’s also home to more than a few craft beer venues. What’s more, the variety here is impressive too. There are classic pubs with extensive tap lists, American-themed bars that will transport you to the Deep South, restaurants that have some of the city’s best chefs at the helm, and so much more.

In creating this Crafty Crawl, we’ve tried to capture a bit of everything this part of Melbourne has to offer, but the one constant, of course, is an impressive selection of craft beers. You're best to top up your Myki before attempting this list though, as our Chapel Street Crawl is going to take you on a tour of four unique suburbs south of the Yarra.

We concede that our first entry actually requires you to deviate slightly from Chapel Street (as do a few others...), but, honestly, White Oaks Saloon is an absolute must. This bar isn’t so much American-themed as authentically inspired by life in the southern states of the US, as evidenced by the venue’s bluesy soundtrack, swinging saloon doors and character-filled menu. Truly, there’s no better way to start your crawl than with a plate of Louisiana crab cakes and deep-fried shrimp sliders.

The beer list also heroes the States, with a number of bottles coming straight out of the US and taps that mix the local alongside imports, and include a little rotation that guarantees something new each time you visit. But, if you really want to get this party started, be sure to give their Beer and a Smoke cocktail a go. Pairing lager with mezcal, bitters and hot sauce (yes, hot sauce), this unique concoction takes craft beer to the next level.

Since you’re in the area and have already committed to a Greville Street sojourn, be sure to stop in at Ladro TAP as well. This bright and airy bar specialises in craft beer with a sustainable edge, with every beer – and a selection of other drinks – poured straight from the wall of taps to keep wastage low. Indeed, sustainability is at the heart of everything they do: they recycle 100 percent of their organic waste and you can even buy bags of it to take home for fertilising your own plants.

The Prahran venue is the second opened by owners Ingrid Langtry and Sean Kierce, with the expertise in creating some of the finest pizzas in Australia first honed at their Gertrude Street brought to bear south of the Yarra. The menu extends beyond pizza, however, with a range of other delicious Italian-inspired dishes ready to be paired with one of their beers, which are typically sourced locally or imported from Italy.

You can also line up a beer or wine flight with pizza or gnocchi for just $15 too.

Enjoy a slice of Italy at 162 Greville Street, Prahran.

Brought to you by the team behind the aforementioned White Oaks Saloon, The Silverlake Social again transports you to the States, but this time to southern California. Named after the Los Angeles neighbourhood of Silver Lake, which is celebrated for its bars, food trucks and music scene, Silverlake Social has the air of a classic dive bar — complete with NFL on the TV and neon lights as decor.

Once again, the beer list leans strongly towards the US, with down and dirty brews like Pabst Blue Ribbon and Budweiser stocked alongside craftier offerings. On tap you have the choice of both American and local beers, while their Boilermaker menu pays homage to this quintessentially American beer cocktail.

Crossing High Street into the realm of Windsor, your first stop should be the ever-bustling Hawker Hall. As part of the Lucas Group, which includes other Melbourne gems Chin Chin, Kong and Baby, Hawker Hall is a spacious and energetic venue pairing craft beer with killer bites.

The menu is inspired by hawker markets from across Singapore and Malaysia, so you can expect a wide selection of noodle, curry and rice dishes, with a lot of Indian flavours also in the mix. Beer-wise, you have just as many options, with 18 taps pouring something for everyone, albeit with a focus on the approachable. In fact, they even offer their own house brand, Shiki, with a lager, pale ale, summer ale and white ale all up for grabs.

Next stop: Tyranny of Distance. Despite the name, this bar is extremely close by, conveniently located just around the corner in a former petrol station. Owing to this location, quirkiness is a given, so don’t expect sleek counter tops or fancy fittings — and that’s exactly what makes this place a must visit.

On the food menu, you’ll find a selection of 100 percent plant-based bites, such as eggplant parmas, Korean “pork belly” sliders and seriously loaded nachos. The drinks list features a number of bottles, cans and tap options, including a rotating guest tap. If you time your visit just right, you’ll also find every tap beer on offer for just $4, with a daily happy hour taking place between 4pm and 7pm. Just don’t linger too long – you still have a few more stops to make!

Fill up your tank at 147 Union Street, Windsor

Hopefully you fuelled up at either Hawker Hall or Tyranny of Distance, because now you have to hoof it 1.6km into St Kilda to The Local Taphouse. A regular winner of Best Bar accolades for years, The Local Taphouse has been flying the craft beer flag in the south – actually, anywhere in Australia – longer than most. The staff keep their 20 taps on constant rotation, offering up the best beers from all over the world, including many tapped for the first time anywhere.

Between the monthly Ale Stars beer appreciation nights, beer launches, huge themed SpecTAPulars (one of which spawned GABS), tasting paddles, beer gardens, boilermakers in Wilfred's upstairs hangout and delicious pub food, this is a place where you can easily take the "local" in the name to heart and settle in at the bar for a good long while. Allow plenty of time to explore the taps here, as it’s one of the most varied lists you are likely to find southside.

Take your pick of The Local Taphouse's very many offerings at 184 Carlisle Street, St Kilda East.

After walking as far south as you possibly can on Chapel Street, take a left at Nepean Highway and make your way to St Kilda’s iconic Grosvenor Hotel. A staple of the Melbourne pub scene since the 1800s, Grosvenor Hotel is a local's favourite thanks to its spacious bar area and growing passion for the craftier corners of the beer world.

The beer fridges offer up plenty of options to satisfy whatever you might need, and the taps are likely to be pouring brews from familiar names from the local beer world. If you’re feeling snacky, the bistro has you sorted there too. Whether you’re after a piled-high burger, a fine cut of steak or something from their excellent cheese and charcuterie selection, you certainly won’t go hungry – or thirsty.

Add in a cocktail bar, the option to take food home, live music three days a week, plus bingo on Mondays, trivia on Wednesdays, and the adjoining Grosvenor Cellars with a wide range of good booze across the spectrum and you've got a pub with broad appeal.

If you're still in need of more, you're in luck...