Growing up, Dan Wright assumed he’d be a winemaker – it is the family business, after all. His dad runs DogRidge winery in McLaren Vale so, after completing a viticulture degree and spending a few years working at wineries in South Australia’s South East, Dan came back to work for his old man. Sensing it would be a lifetime commitment, he asked to take some time off before settling down and went on an epic 18-month surfing trip.

“I started in North America and ended up in South America, catching buses and backpacking and living off of twenty bucks a day,” he recalls.

When he ran out of money he worked a vintage in northern California’s Napa Valley to top up the bank account. And that’s when everything changed.

“This was 15 years ago, back when the craft beer industry was starting to really ramp up and the local town had two or three brewpubs,” he says.

Naturally, they became hubs for the vineyard workers to congregate at and, as Dan developed a taste for craft beers, he began to wonder why Australia’s wine regions didn’t have similar offerings. The next thought followed soon after: “Geez, I'd love to have one of these in McLaren Vale.”

So he came back to run the family vineyard as promised, but spent a lot of those five years figuring out how to start his own brewery. He began homebrewing but soon realised he needed to scale it up to make a viable business and looked around for a facility to contract brew in, which was when he ran into his first hurdle: there weren’t many Adelaide craft breweries around in 2010, and even fewer with spare space for contract brewers. So he looked at the closest interstate options and settled on Mildura Brewery, just across the Victorian border.

To begin with, he sold the beer in 500ml bottles.

“I thought that was going to be my point of difference with other breweries,” he says with a wry chuckle, but when he noticed larger brands like James Squire ditching that format he saw the writing on the wall and switched to 330ml.

Inspired by his epic surf trip, he came up with a simple design for the labels: a silhouette of a surfer carrying a longboard that still graces Swell’s beers today. And, because he was initially inspired by a surf trip, it’s no surprise he focused on sessionable beers before that term had gained popular currency. Of his initial offering, the Amber, Golden, Pale and Lager are still in the core range, though the Belgian wit has since fallen by the wayside.

Eventually Mildura ran out of capacity and he moved production to Southern Bay in Geelong but his dream had never been to contract brew from a distance of 700km.

“I just felt when you're contracting, they do your recipe as best they can but then it turns up and if it's not what you want, you still have to sell it.”

He needed more control over the beer he was selling, but it took five years before he found a solution. Just down the road in Willunga, Vale Ale was kegging onsite but sending their product to NSW to be packaged, so Dan asked to rent space in their brewery and go halves in a canning line. They crunched the numbers and realised they were better off owning the line outright, but still let him put his tanks in their facility.

The move and increased control paid dividends immediately – “with my first or second batch of Golden Ale in the can I won the trophy for the best Australian Pale Ale at the International Beer Awards in Melbourne,” he says proudly. He hasn’t looked back since.

For the last three years, Dan’s been nomad brewing out of the facilities at Vale Ale (now owned by Bickford’s), as well as Myponga’s Smiling Samoyed. But the goal was always to have his own brewery and taphouse like the one stop shops in Napa that had first inspired him.

The first step was opening a taphouse in an enormous shed on Australia Day this year, and it’s been so busy that he’s already applied to expand the capacity from 100 to 250. There’s also space for a fifteen hectolitre kit and six fermenters that are arriving any minute and will finally allow him to be master of his own destiny in terms of brewing.

The core range will remain, but now he can also have a little fun and play around with experimental beers as well. Already he’s made small batches of quince Berliner Weisse, NEIPA and gluten free pale ale, the last a single malt, single hop beer made from sorghum for a gluten intolerant mate. Dan will keep ten of the sixteen taps for his own beers, and the rest will be guest taps that offer a point of difference: “Mainly, they aren’t in that sessionable category – things like darks and sours.”

One of the original beers he dropped might even make a belated comeback.

“I still get people to this day coming and asking if I’m gonna bring the wheat beer back,” he says, “so I think I’ll have to once everything’s up and running.”

But, even as he looks to the future, Dan still has one eye on the past. In a nod to his winemaking pedigree, there are 30 acres of vines around the taphouse. 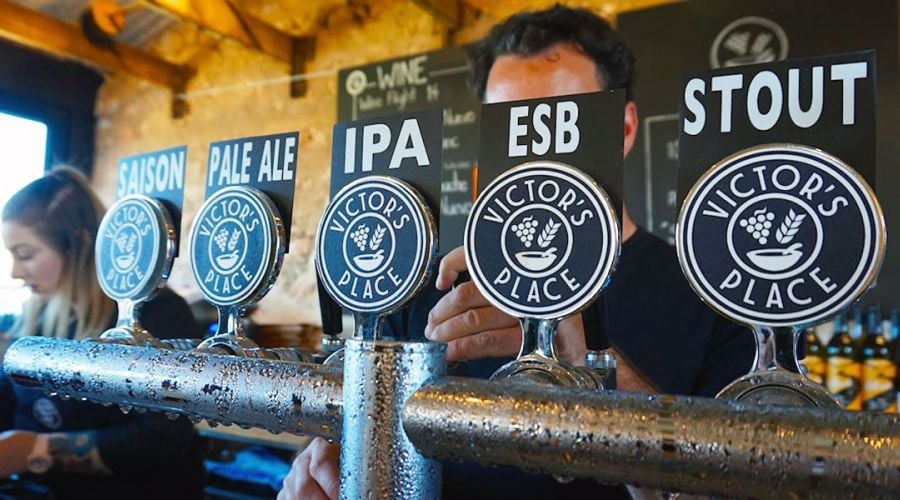