It’s a Wednesday night in the middle of summer and the Stone & Wood tap takeover is well underway. The morning rain may have drenched the city but the late afternoon sun means the pub’s pavement is buzzing with knock off drinks.

It’s one the venue manager’s last shifts too, so it’s not just those fleeing the office drinking pints but a mix of sales reps and local bar staff too, keen to see their mate off before he moves back home to Ireland. The guy from Brisbane I'd been chatting to taps out early to go catch a Tim Rogers gig across town.

It could be a pub in Melbourne or Sydney, yet here we are in London’s Fitzrovia, a suburb that bears a stunningly similar name to a part of Australia in I’ve enjoyed so many pints of Pacific Ale. But for anyone enjoying Pacific Ale in London, whether on that sunny Wednesday evening or an Australia Day event in the depth of winter has Pat Keeble to thank: he's Stone & Wood’s man in the UK.

Prior to moving to the UK, Pat was on the road for the brewery in New South Wales and traded his car and Opal Card for an Oyster in 2016.

“I’m much fitter than I was in Australia because I drove everywhere in Sydney,” Pat says. “I’m on foot everywhere here; I pick up a share care every now and then but public transport is so good here I’m just on foot with a backpack filled with beers.”

Before he hits the tube to London’s countless pubs, Pat’s up early to check in on orders and touch base with the team in the Northern Rivers. While he does keep in close contact with home, his role’s a little more amorphous in the UK. A day might quickly move from shouting beers in Soho to a dash to a florist to make sure he’s got the essential eucalyptus to add to a festival stand.

“I’ve got all the support in the world from the team back home but 12 hours a day they’re all asleep and I’ve got to figure stuff out,” Pat says. “So, I’m a jack of all trades when I can be.”

As Australia’s craft beer industry has bloomed, local brewers have increasingly looked to get their beer overseas. Mostly, that’s done through distributors on the ground but, keen to keep control over the beer they send across the planet, Stone & Wood sent Pat. Arguably the brewery’s position as one of the country’s largest independent breweries affords them that opportunity but Pat says giving him the boots-on-the-ground role has allowed them to cut through to British drinkers in a way other Australian brands haven’t.

“There weren’t really many other Australian beers in the market when we came here,” Pat says. “I mean Little Creatures was already here, but it wasn’t really doing anything … and you’d see Coopers and stuff like that but there was nobody actively here – especially on draught.”

Breaking into the British market has been a focus for Stone & Wood since before Pat arrived, with the brewery intermittently sending beer to the UK through a partnership with Camden Town Brewery – the London brewery launched by Aussie Jasper Cuppaidge – since 2013. Following a collaboration between the two breweries in 2015, Pat was asked to head over and help sell some beer; midway through 2016, those moments in Europe became rather more permanent.

Since moving, a lot of Pat’s energy goes into getting Pacific Ale on tap, with somewhere around 70 percent of their sales coming through bars and pubs – the vast majority in London. For off-premise, his focus is largely geared towards small, independent venues and bottleshops, but a recent partnership with Majestic Wine (which has more than 200 stores across the UK) has helped spread Pacific Ale into more parts of the country.

That beer travels the 17,000 or so kilometres in a shipping container each month, taking six weeks to get from Murwillumbah to Pat’s warehouse in London. It’s a long journey across oceans and the equator but, Pat says, they do whatever they can to look after it.

The beer might taste like home but the English beer world is one that has some striking difference to Australia. For one, there’s far more pubs and pub groups, with the largest owning hundreds of venues. It means there’s some customers that can sell a lot of beer but it’s not without its challenges.

“The problem with that is, the layers and layers you go through, so you lose more and more direct contact with the actual venue,” Pat says. “So, then you run into a whole host of potential quality issues: how’s that beer getting there? How’s it being looked after? Do the people getting it know anything about it?”

Knocking down doors to new venues and and introducing bartenders to Pacific Ale, is a part of the role Pat relishes. He was with the brewery back when its original Byron Bay home had hit capacity and before Murwillumbah came online in 2014.

“I went from being in Sydney at a time where basically we couldn’t keep up – I had no beer for people,” Pat says. “When I started at Stone & Wood, I was on a sales freeze for the first six months; I’m in sales and I couldn’t sell anything.”

At those first venues where Pat got his beer on tap, often it was Pacific Ale’s showcase of Galaxy that helped draw bar managers and drinkers to the beer. Since then, that hop and the likes of Ella have been embraced by British craft brewers so the beer’s profile isn't quite as unusual as it once was; however, its drinkability and birthplace in Byron remain among Pat’s key selling points.

“If you talk about a beer from Australia, that’s pretty much the embodiment of the kind of beer you’d expect.”

That idea of Australia in a beer has become more of a focus for Pat as he’s moved into more mainstream pubs and restaurants. For those smaller independent operators he’s made sure to keep a steady flow of seasonals, like the brewery’s fledgling Counter Culture series, moving across the ocean.

More recently, Pat’s had the chance to grow the team too, taking on fellow antipodean Alvin Els from New Zealand to help with events and has been looking for another full-time British team member. Slowly, pints of Pacific Ale have broken new ground too.

“It’s still largely London [but] I’ve started to attend more beer festivals outside of the capital just to get that awareness and so people can start to see the brand,” Pat says.

“But we’re talking about a city with close to half the population of Australia – and I don’t know how many the amount of pubs as well – there’s plenty of work to be done in London.”

It’s also a city filled with Australians, as that Wednesday night in Fitzrovia is a testament to.

“I know lots of pubs where a group of Aussies have come in and literally cleared them out; they’ve seen Pacific Ale on and gone, 'Right, we’re sitting here for the next couple of hours.'.”

That said, he doesn't hunt down pubs across from backpackers or make sure he’s got a tap in every bar in Clapham.

“We go for the right venues first, that we know will look after the beer," he says. "It just so happens that there’s Aussies everywhere in London now.”

Thanks to Pat, they won't be too far from a pint of Pac Ale either. 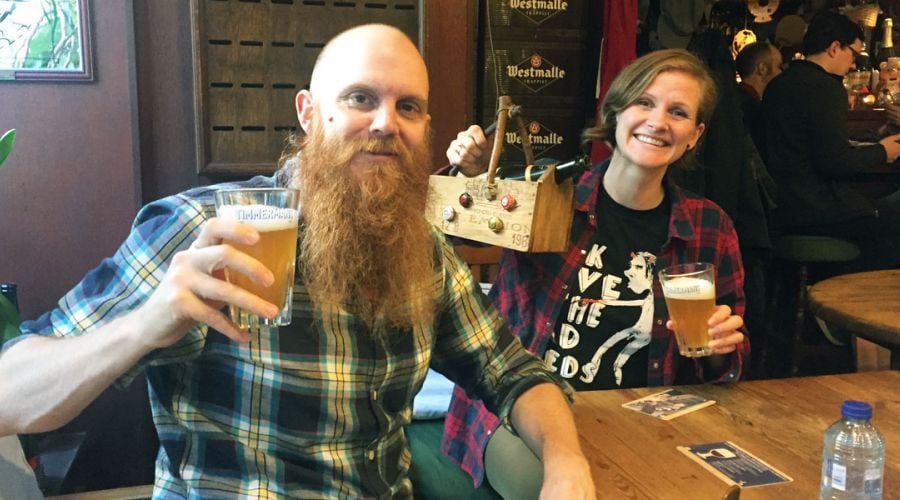