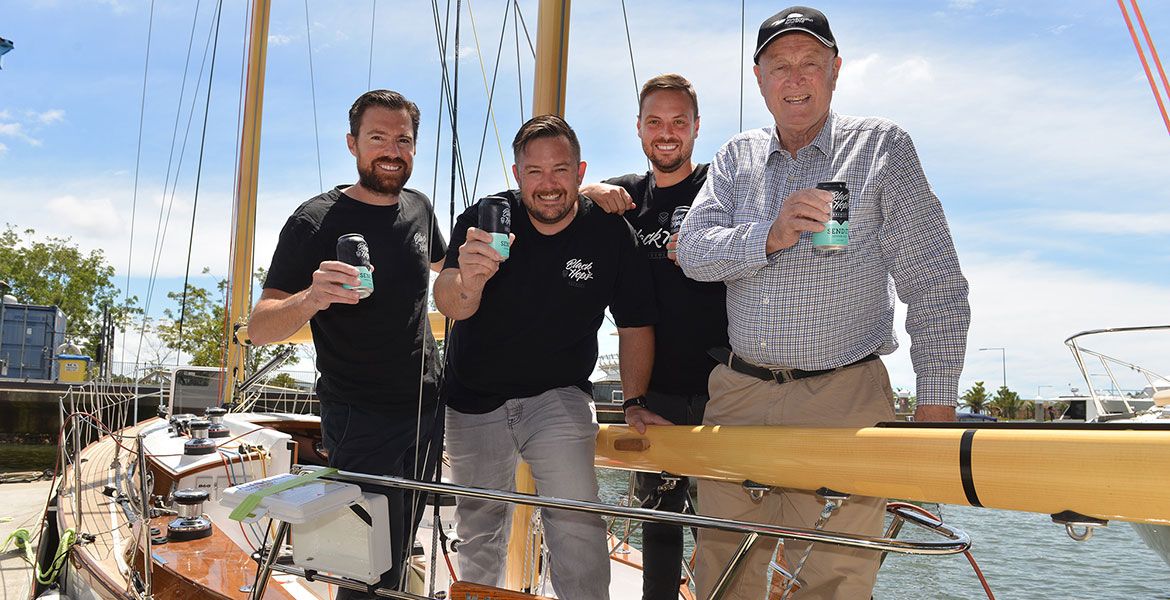 On Boxing Day 1951 at, the Katwinchar set sail from Sydney Harbour; destined for Hobart’s Derwent River with the ship’s crew aiming to outperform thirteen other boats in the seventh Sydney To Hobart Yacht Race.

At the time, the boat was already close to four decades old and earlier in the year it had transported the Mossop family from England to start life anew in Australia. And, while 1951 wouldn’t be the Katwincher’s year in the race, 2019 might well be.

At the ripe old age of 114, the Katwinchar is once again heading from Sydney to Hobart and, this time, it’s flying the flag of Black Hops, following an unlikely string of events.

Katwinchar is owned by Bill Barry-Cotter, from Gold Coast luxury boat company Maritimo, who also happens to be the landlord at Black Hops’ Biggera Waters brewery.

“When we told him we were putting a brewery in the shed he thought it was very strange, because these are old and dusty manufacturing sheds,” Black Hops co-founder Dan Norris says. “Once we showed him around and he could see what we were doing, he started to understand the whole thing.”

Dan says Bill felt getting Black Hops’ logo on the spinnaker felt too perfect an opportunity to pass up since the boat was built in 1905 by coopers at Watneys Brewery in London. The name Katwinchar stems from the three Watney children, Katherine, Winifred and Charles.

“It’s a passion project for Bill, it’s not a money-making exercise and he’s poured so much into restoring the boat,” Dan says. “So, he just thought it would make it a cooler story, the fact it was built in a brewery and had a brewery on the spinnaker.”

Passion project couldn’t be more fitting considering Bill’s long association with Katwinchar. His father and some friends found the boat in the 1960s in Tasmania and sailed it back to Sydney. The boat was eventually lost but, in 2017, one of Bill’s eagle-eyed mates spotted it on an ad on Gumtree and, since then, three full-time employees have spent a total of 10,000 hours restoring the boat to its former glory.

“We took a look at it once they’d restored it - it looks like a brand new boat,” Dan says.

The partnership will also see Black Hops brew a beer for the event, a pale ale to be called KatWinChar.

“We’ll go down and give them some beer when they finish the race … and get it on tap in a few venues,” Dan says.

As for how a yacht older than the Titanic is likely to do in this year’s race, Katwinchar apparently does stand a chance. Being a handicapped race, the size and dimension of competitors are taken into account in declaring the overall winner.

“It’s got every chance," Dan says. "I think it’s the smallest boat in the field and, from what Bill tells us, it’s a really well designed boat and it’s quick.”

Articles by Will
black hops sydney to hobart