Now that we’re a couple of weeks into 2020, we can all give up the charade. Face it: you’re unlikely to stick to your New Year’s resolutions. Don't worry, though, while we often start a new year off with grand ideas, life happens, January turns to June and we end up waylaid down a new path.

Unless, of course, your entire life for one year has been dedicated to building a brewery. That was Pim Muter and Samuel Percy's 2019: having picked up the keys to the former home of Clegs, Australia's oldest fabric store, on January 1, 2019, they finally opened the doors of Alchemy Brewing to the public just a few days shy of 2020.

Alchemy's story dates back further with Pim, who originally hails from New Zealand, and Samuel originally meeting close to a decade ago. Pim had spent years working in hospitality while honing his homebrewing and Samuel was working as a carpenter and furniture maker before setting up the North Walls climbing gym in Brunswick.

The year spent turning Clegs into Alchemy and Sam’s background in building have paid off as the small brewery is housed inside one stylish venue. Walking in, the first thing you notice is just how much natural light the venue receives, with the sawtooth roof welcoming a stream into the bar and the windows along the building's Lygon Street side effectively turning the space into a beer garden.

If Alchemy's first few weeks open are are anything to go by, the community’s been quick to embrace it (including this writer, who was particularly taken by the soundtrack of Townes Van Zandt). Taking a year to open helped on that front too, with Pim and Samuel regularly spying pairs of eyes peering in to catch a glimpse of what was happening beyond the graffiti-stained windows.

Now that all the graffiti's gone, a 500 litre brewery, 16 taps – eight of which were pouring Alchemy's beer at the time of writing – plus booths, a well-worn pool table and some particularly comfy leather stools sit inside. Currently, the kitchen is still a little way down the track, although toasties, cheese boards, dips and the like are all carefully constructed behind the bar.

We popped in to chat to the founders as part of our Who Brews...? series.

Alchemy Brewing was started by myself, Pim Muter, a 19 year veteran of the specialty coffee industry and brewing enthusiast, and Samuel Percy, entrepreneur and ex carpenter/furniture maker.

We brew all of our beers on site at our brewpub located at 396 Lygon Street, Brunswick East.

Because beer is amazing and I find the brewing process is endlessly fascinating.

After spending a few years living in Amsterdam in my early 20s, I moved back to Australia and was appalled by the price of beer having gotten used to buying a six-pack for around three euros.

I promptly bought a Coopers homebrew kit and my long journey into brewing began.

Alchemy is a mythical mixture of science and magic, which is pretty much what making beer is in my opinion, and the interesting imagery we could play on with the Alchemy theme cemented the decision.

I would have to go for the XPA: it's approachable, refreshing and moreish. Perfect for a summer afternoon session.

Good chance it will be Calexico, a Tex-Mex indie rock band with a great spaghetti western sound.

Melbourne breweries Molly Rose and Future Mountain spring to mind, as does Wildflower from Sydney. I hope one day I can find the space and the knowledge to play with alternative fermentation as they do. Something to aim for!

For now our beer is sold exclusively at our brewpub in Brunswick East – come in and check us out!

Who knows? If everything goes well, I see our Brunswick venue being the flagship of the brand and a bigger production brewery in the wings.

You can find our other Who Brews...? features here and Alchemy and hundreds of other breweries and good beer venues around Australia in the free Crafty Pint app. 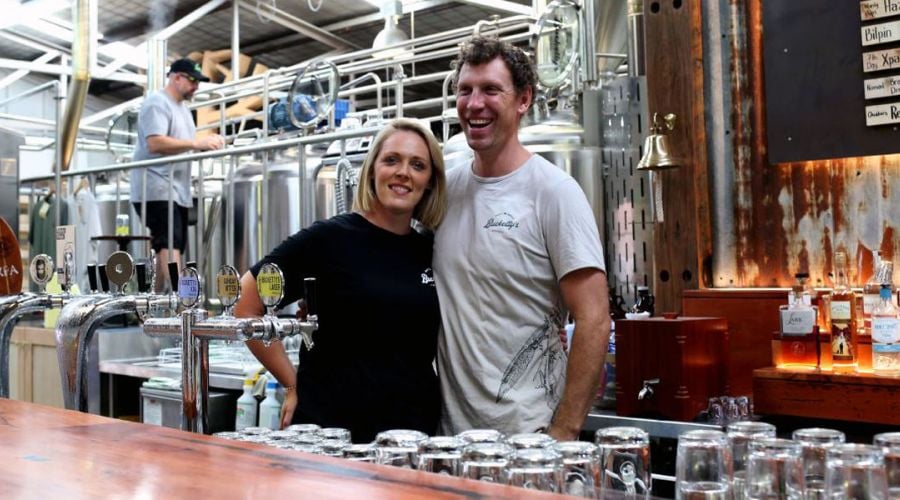