Upper Hutt’s finest export has done it again. Panhead’s flagship Supercharger American pale ale has taken out the number one spot in the GABS Hottest 100 Kiwi Craft Beers poll for 2019, the third time in four years that the orange one has finished top of the pile.

There’s a fairly familiar look to the runners up too as Garage Project took the other two podium spots – plus a whole lot more; the Wellington brewery featured 22 times in the final list, led by the Pernicious Weed double IPA in second and the Aro Street New England IPA, a collaboration with US brewer Trillium created as part of the Hapi Sessions series, in third. It was one of two beers from that series to crack the top ten, with No Dreams Till Brooklyn – brewed with New York’s Other Half Brewing – coming in at six.

The list represents a snapshot of the tastes and preferences of a section of New Zealand’s beer drinkers and duly features a cavalcade of some of the best and brightest in the country’s burgeoning brewing industry, from trophy winners to dependable favourites and previously unheralded stars.

Craig Williams, GABS Festival event director and poll organiser, said: “To me, it’s a sign that the New Zealand craft beer industry is in a fantastic position. In the ‘old school’ beer world, mainstream brewers might only release the same four of five standard beers all year. Now you have this amazing ecosystem of hugely talented and prolific brewers pushing the boundaries of style and creativity in beer and, importantly, finding a market to support that. There really has been no better time for beer lovers to expand their horizons and really explore what’s out there.”

2019 was the fourth year the annual GABS H100 has been run in New Zealand, having started in Australia in 2008 and grown into something of a beast; in 2019 more than 35,000 people cast votes in the Aussie version, making it one of the beer world’s largest exercises in democracy and leading to the inevitable social media pile-in.

The nature of things means the poll is an imperfect system that favours brewers with more marketing resources, wider social media reach, a larger or more engaged local population, better media coverage or some other form of cool or cachet that draws drinkers out to vote. It’s also likely to favour beers that have greater distribution, are consistently well made, reasonably priced or are just so spectacular and/or bonkers that you can’t possibly forget about them come voting time. All that being acknowledged, let’s not waste energy attempting to poke holes in the mechanism. Just take it as it is and enjoy the show.

Hoppy beers – which is to say pale ales, IPAs and hazy (New England) IPAs – crushed this poll like citrus fruit in a juicer. In all, 66 of them squeezed into that broad category, with New England IPAs singularly dominant.

That left a small melange of styles fighting over the remaining third of the spots. Stouts of all kinds – “normal”, extra, imperial and the delicious sweet variety – took eleven places; sour beers – which for our purposes include Berliner Weisse, Gose, kettle sours and mixed ferments – bagged ten; there were a couple of New Zealand pilsners and, beyond that, we start getting into the category of chaos that is “specialty beers”.

Is any of that especially surprising? When compared with the similarly hop-dominated results of the Australian poll, probably not. From a purist’s point of view it’s perhaps disappointing not to see a wider spread of style diversity rather than diversity with a narrow range of styles, but the breweries make what the people want and the people vote for what they like.

And the real story here is in the haze: honestly, who would have forecast the extent to which hazy beers have taken over, going from effectively not existing as a recognised style to being outright most popular in the Kiwi poll – including seven of the top ten places – within the space of a couple of years. Plenty doubted whether the craze would last but it seems the trub chuggers were onto something.

A sad view of the South

By most measures the stretch of water separating New Zealand’s North and South islands is not vast. It’s not as if you can stand in Wellington and shout to your mate in Picton, but you can at least see to the other side. Yet that divide in the context of this poll is apparently colossal, with Emerson’s the only South Island brewery to feature in the top 100 (though they did at least get four beers in the mix).

While it’s a poor representation of the true richness of the southern brewing scene and the respect in which it’s held, when it comes to this poll on both sides of the Tasman there just seems to be something about being an island situated a little south of the main population that doesn’t register with voters; in the corresponding Aussie version, despite being home to around 40 breweries, Tasmanian brewers can’t even get a crack at the top 200.

A primer, for the uninitiated: in the beer world there are good guys and bad guys. “Good” is generally accepted as being any brewery that’s small, in a less than ideal location that’s still OK because the rent’s cheap, and where you’ll see the brewer also doing the deliveries, pouring beers and giving hugs to customers. The “bad” guys are generally part of a foreign-owned and vertically-integrated corporate structure that also manufactures cars.

The bad guys’ raison d'être is producing vast quantities of technically perfect but often horrendous beer which is sold for about $1 per can. The good guys are often technically deficient but charm their way through by churning out a few kegs of wonderful beer (and also some horrendous beer). Somewhere along the line the bad guys started buying some of the best good guys, at which point things got really murky and now what even is craft beer?

And that seems to be working out pretty well for the breweries involved and the people who vote for them. Need evidence? The past three polls featured a slightly sad exercise in tracking the slow extinction of the Tuatara brewery after it was bought by DB; from seven beers in 2016 to three the following year, the brewery was completely absent from the poll in 2018. But the wily old reptile has clawed its way back from the brink to post five beers in the latest list – including a top ten finish for its Hazy Pale Ale – mirroring, perhaps, both Feral and Mountain Goat's improved showing in this year's Aussie poll after years of decline following their sales to Coca-Cola Amatil and Asahi respectively. Seems that it can pay to be a bad guy.

A lack of Liberty

Keen eyes reading down the long list will quickly spot a gaping absence: Liberty Brewing. The Helensville brewery had half a dozen beers in last year’s poll and is currently the Brewers Guild of New Zealand’s Champion Brewery (pictured above collecting one of their 2019 trophies), two factors you’d wager would find a lot of favour with voters. As is their wont, this time around they chose to give the poll a miss and didn’t register their beers, ergo people couldn’t vote for them. Such is life.

Similarly, not seeing Epic in the upper reaches of the table seems slightly shocking given the Auckland based brewer’s past consistency (it also had six beers in 2018 and the iconic Hop Zombie has previously placed on the podium). But, like forgetting to sign off on your kid’s field trip permission slip, they were late registering their beers and (perhaps) paid the price of tardiness with two of the biggest falls; Armageddon down 69 places and Hop Zombie down 63.

Despite two of the northern heavyweights mentioned above effectively sidelined, Behemoth alone ensured that Auckland would be well represented by contributing 13 beers to the tally – a ridiculous haul that only carries an air of insignificance due to Garage Project doing what Garage Project do and sucking up nearly a quarter of all placings (22, to be exact). As has become standard, Deep Creek put in a great showing with six entries, but on the whole Auckland’s representation was down on the previous year, falling from 11 breweries and 49 beers to seven breweries and 31 beers.

And it was Wellington which picked up much of the slack – including gentle bragging rights as most represented beer region – with nine of its breweries contributing 52 beers to the list. Aside from the aforementioned Garage Project providing an elevated launching pad, there were high fives all round; newcomer Maiden Brewing burst onto the scene with five spots, Fortune Favours increased their tally from two to five and everyone’s favourite preflight drinking den, ParrotDog, held at five too.

That Auckland-Wellington axis didn’t leave much for others to feast on, but the best of the rest was the beautiful Bay Of Plenty which had seven entries thanks to the cohabiting beer buddies Mount Brewing and Funk Estate. Northland followed with five courtesy of current AIBA Champion Small Brewery McLeod’s, Otago had four via Emerson’s and Hawkes Bay and Waikato landed one each thanks to Brave Brewing and Lakeman respectively.

Most beers by brewery

Who owns who and how’d they do?

Look out for our interviews with the people behind some of the stories in this year's poll tomorrow (Sunday). Photo at top by the GABS Festival team. 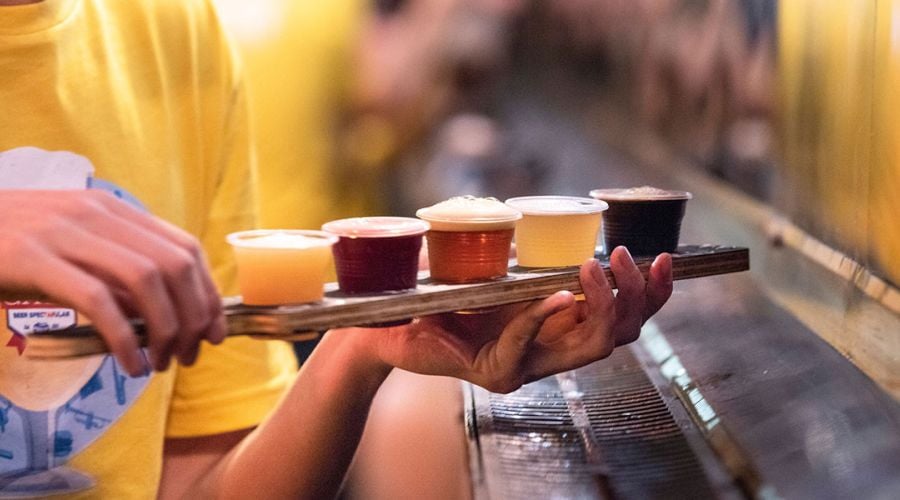