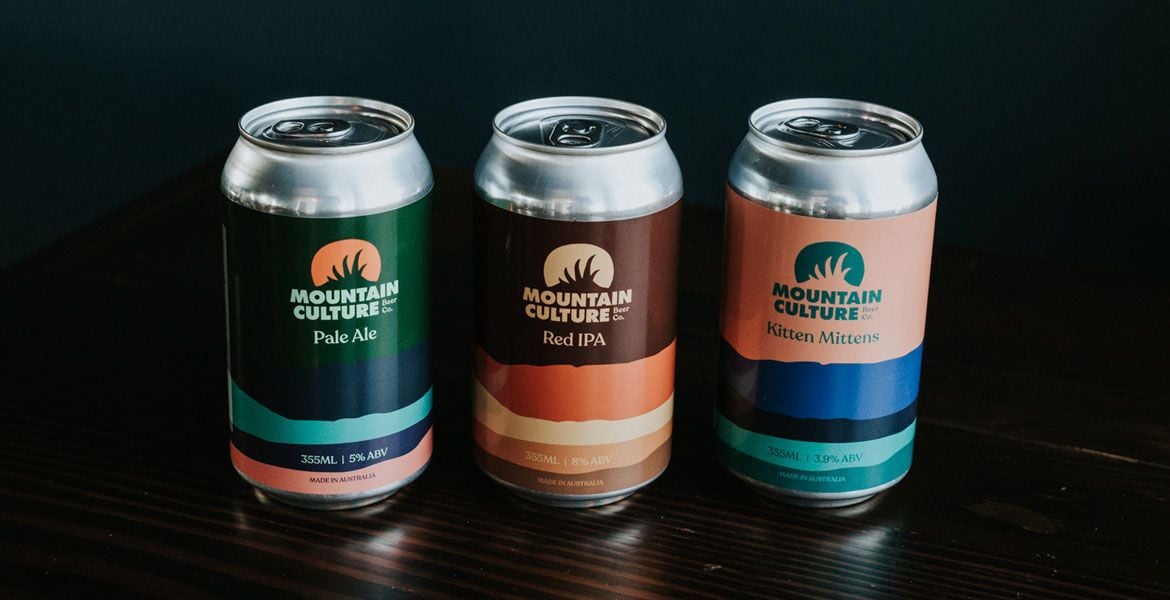 DJ McCready is no stranger to brewing beer in beautiful places. He’s made beer in the foothills of Colorado’s mountains for Oskar Blues and along Sydney’s sparkling Northern Beaches for Modus Operandi, during which time he helped the brewery shoot to fame on the back of multiple award-winning brews.

These days, you'll find him settled in the Blue Mountains town of Katoomba where he and wife Harriet have opened Mountain Culture, a brewery they can call their own.

“We always wanted to be in the mountains,” DJ says of their choice of location. “I’m an outdoors guy, I love being able to get out in nature, go climbing and hiking and all that. It’s how I recharge.”

The couple started scouting for locations almost two years before the brewpub opened in 2019, but ran into plenty of issues regarding licensing and property availability. Eventually, a location became available: the old Civic Video store in one of Katoomba’s main streets.

“This just popped up," he says. "It was weird, it was just green light after green light.

"We met the owner and he was selling it for a price point we could deal with. We thought, 'That’s great, but let’s see what the council says.' Then they were like, 'Oh, we think that’s an awesome idea!’.”

Thus two years of construction began, including the removal of the ceiling above the ground floor to make room for tanks, plus asbestos, rot, and “random patches of concrete” on the floor. At the same time, they set about recycling the existing finishing timber to build tables and benches. Then came the brewhouse.

“We’re on a 12 hectolitre system with 12 hectolitre tanks,” DJ explains. “This is a very different operation for me, with everything so small. My background is in production brewing. It’s like – wow, we only get 24 kegs out of a tank, that’s crazy!

“It really hit me one week when I was brewing my ass off in here, it was about ten days of solid work. That would have taken me two and a half hours to brew the same amount of beer at Oskar Blues.”

The purpose of the small tanks is to ensure a continually changing selection of unique, small batch beers; the aim is to rotate 80 percent of what’s on tap.

“Right now, we have a lot of light, hoppy, juicy and sour stuff going on," he says. "When winter’s here, it’s going to be completely dark.

"That’s one thing that I really love about the Blue Mountains: it actually gets cold up here. In the wintertime, it’s snowing. So, the weather suits, say, a Russian imperial stout. We actually do get to brew with the seasons.”

At the heart of Mountain Culture is the highly-tailored brewhouse, which comes about thanks to DJ’s close ties to US manufacturer Premier Stainless Systems. It comes with the capability to temperature control the mash tun, meaning that wort in the mashing phase can be gradually heated, rather than steeped at a constant temperature, as is the case in most breweries. In brewing terminology, that allows for step and decoction mashing, primarily used by traditional European breweries to extract different flavours and higher efficiencies from the malt.

“There’s a few benefits to that,” DJ explains. “You get better head retention and I think it adds a more complex body to the beer. It also means I can use under-modified malt and, since I love brewing hoppy beers, we can also do hop stands, which works well for all our juicy beers.”

Along with the customised brewhouse, there’s also an ability to customise the water used for the beer, thanks to a reverse osmosis filter than strips out all the salts and minerals.

“I'm really treating water as another ingredient up here. The Kölsch we have on matches the water to what’s in Plzeň in the Czech Republic, so extremely soft and light [like a traditional Pilsner]. Then, a for lot of our IPAs, we can manipulate the minerality to emphasise the bitterness or even go the opposite way, upping the chloride to give it a pillowy side and a roundness to the mouthfeel.

“That’s something I find really fun. I’ve played around with ingredients for so many years – different barleys, different hops, different yeast strains – but I’ve never actually had the ability in any of the breweries I’ve worked at to play with the water.”

So far, Mountain Culture’s beers have been a massive hit with the locals, something that’s surprised both DJ and Harriet.

“I really thought when we opened up we’d completely cater to tourists,” DJ says. “I knew that our local market would come in, but I thought they would be about 30 percent of our sales. Actually, it’s been the complete opposite. Since day dot it’s been 90 percent locals in here, coming in twice a week. I’ve been blown away. It’s brought a lot of people out that might not normally come out.”

One of the biggest sellers for locals so far is session IPA Kitten Mittens. A collaboration with local (and future Olympic) rock climber Tom O’Halloran, the beer was designed as a recovery beer to drink after a long day: one to sit back and relax with while enjoying a view. It’s named after the hardest climb ever done in Australia, in turn an It's Always Sunny in Philadelphia reference.

“I thought it was a cute name, and it sounds like what a 3.5 percent beer should be called,” DJ says with a laugh.

However, despite the popularity with locals, there’s still a desire to draw visitors from Sydney and further afield to the brewpub. The presence of an on-site kitchen serving up a range of burgers to eat on the back deck, which overlooks the hills toward the Megalong Valley, ensures any visit is worthwhile, especially when combined with a trip around the area.

“We're surrounded by this UNESCO World Heritage Area and it’s incredible. When I bring visitors here, they’re blown away. They’re like, we’re just an hour and half away from Sydney, this is insane! I remember I got so amped the first time I came up here.”

As for the future, there are plans to expand into the area downstairs, which has space for an extra fifteen additional tanks plus a packaging line. Any packaging will be done primarily in cans, something DJ is used to after working at Oskar Blues, the first craft brewery to switch to tinnies in the US.

“It’s funny, but it’s great that it’s taken off so much. It was still a novelty back then. Seeing the change towards cans has been kind of nuts,” he says. “I think it’s great, it’s more recyclable and easier to take out on bike rides and mountain climbing trips.

“In fact, that’s our basic marketing plan. We just ride or walk to a cool view and take a picture of the beer. That’ll sell it!”

You can join the locals at 23-25 Parke Street, Katoomba, and follow Mountain Culture's adventures here. Photo at top of article by Willow & Co. SixTwelve Brewing was opened in late 2020 by husband and wife team Brad and Alle Reid. We got in touch to find out more about the brewpub operation for our long-running Who Brews...? series. read on