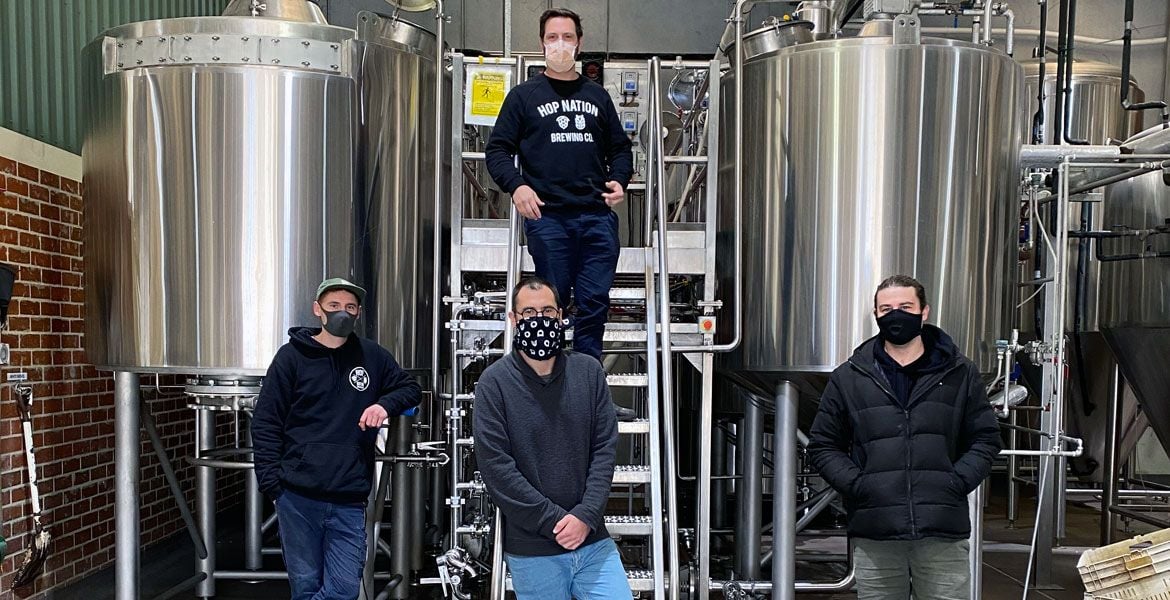 But back to Hop Nation, who late last year announced they were to open a second brewery in Footscray only a few metres from their original home in Whitehall Street. Co-founder Sam Hambour (above on the brew deck) says, while plans for that space are still in the works, completion is still some way off after the development proposal was sent to the Victorian Civil and Administrative Tribunal (VCAT). Due to COVID-19 related delays, their hearing won’t take place until the end of March 2021.

“It might take two more years to get that sorted and we knew we were going to buy some new equipment to put in there," Sam says. "And we heard this was coming up."

They were eager to secure more production space, with Hop Nation already making beers at Brick Lane and their home in Footscray well and truly at capacity.

“We were probably running the place at 250 percent of its ability,” Sam says of their Footscray site. “So we can just get smarter about what we do there and [at Mornington] we can brew more efficiently and in a bigger system.”

The brewhouse in Mornington is 25 hectolitres compared to the fifteen they have at Footscray, while the former is capable of pushing through more brews each day. As a result, they’re splitting their brewing team across both sides of Melbourne and will put down their first brew in Mornington tomorrow.

“It just gives us a few more options for production over the next few years as we work things out,” he says.

“COVID has changed the game a bit so we will play it by ear and have these two sites running while we work out where we go next.”

Sam says their new brewery will offer them extra flexibility too compared with brewing on equipment owned by others.

“You make great beer but forecasting and timing plus not having full control has its drawbacks,” he says. “Even with our specialities, we want the ability to just making bigger batches if we want to.”

The original Hop Nation home will remain very much the heart and soul of the brewery, as well as home for more small and limited releases. This will include a greater focus on their barrel program and the mixed fermentation beers released under the Site Fermentation Project banner. After a six-month hiatus instigated by a combination of incapacitation at Crafty Towers, a disgusting workload and then the inexorable passage of time, we finally got the Blind Tasting show back on the… read on