After many months of planning, applying for permits then building, Bandolier Brewing opened their doors to welcome the people of Warragul inside right at the end of 2019.

Brewery owners Zander Thompson and Carmen Priscila Macias were ready to herald a new decade with a brewery locals seemed ready for – one that was long overdue considering Warragul had been brewery free for more than a century.

Yet, while the world as we know it might have changed, Zander says support from locals throughout the two waves of COVID-19 proved crucial.

“We survived this year off having a really good mix of regulars in town and now there’s a lot of new faces coming in too, which is good,” he says, referring to the period since Melbourne's ring of steel came down in November.

"People do the tour, driving around some of the wineries, and we’re the only brewery for about 50 kilometres."

It's the locals, however, who help the young brewery make it through this tumultuous year.

“The response from day one has been incredible and far beyond our expectations," Zander says. "Especially given that on opening day our bar was unfinished and essentially just some beer taps in an unpainted room.

"We’ve always received encouraging comments from our regular customers as they have watched the place evolve, and constructive feedback on our beers. Judging by countless conversations, locals have wanted a brewery in town to call their own for a long time.”

During the second wave, Bandolier made a first foray into bottles too, with Number Juan, a lager featuring malted corn, the easy choice to debut given its loyal following.

“I almost didn’t put this beer on tap," Zander says. "It was a beer I used to brew at home for my wife, as she is Mexican.

"Fortunately, we gave it a try for the brewery opening and it’s been our best-selling beer from day one, so it was an easy decision to bottle this style first”.

Though the brewery is on the small side – each batch is around 700 litres – soon the brewery will see its name spread a little further through a collaboration with Melbourne's 2 Brothers. Zander joined forces with the Moorabbin operation's brewer Chris Fletcher to launch the Collab Lab series.

"It’s a way for Chris to do things that they otherwise wouldn’t be able to fit into the brewing schedule at 2 Brothers.”

It means he gets to work on a far larger kit than his own and, for 2 Brothers, it's an excuse to experiment. The first release, Mandarin Sour, is due out in cans mid-December and it's not only the biggest batch to feature the Bandolier name but a bit of history for 2 Brothers too: it's the 13-year-old brewery's first sour.

“We did a small batch at Bandolier and it went really well and sold really well, so he went back to 2 Brothers and went, 'Why don’t we do a big one?'.''

As well as working closely with 2 Brothers, Zander has been keen to establish partnerships with local businesses and restaurants; among the connections to date has been on with Trevor Perkins, head chef at the renowned Hogget Kitchen – an award-winning restaurant that's been operating on the outskirts of Warragul since 2017.

“We aspire to do with beer what Trev does with food, which is a focus on sourcing local produce and letting the ingredients speak for themselves,” Zander adds.

To find out more, we invited them to be part of our ongoing Who Brews...? series.

Zander Thompson – brewer and founder. Up until very recently, I was still working my day job as a lawyer.

Carmen Priscila Macias – the master of coin and accounts manager – and Zander’s long-suffering wife – who was previously a key account manager in sales in Mexico City.

We brew at Bandolier Brewing in Warragul, Victoria. Currently Baw Baw Shire’s only brewery and, as far as we know, the first brewery to open in the shire since the 1880s.

For the love of learning about the process, the ingredients, the industry and the endless challenges in doing so.

For me, it was from an overseas trip in 2012 to England, Belgium, Germany, the USA and Mexico. It was hugely inspiring to go from trying classic styles in the UK and Europe then to travel to the USA and Mexico to see more modern interpretations and newer, developing styles.

The name, graphic design and décor in our bar is a mix of my love of Western films and Carmen’s homeland of Mexico.

Probably our White Ale as it is inspired by a classic European style but with our own interpretation. The ingredients in it make it a hybrid of a Belgian witbier, a German Weissbier and a saison. Our best seller is our Number Juan Mexi-corn Lager which is a variation on a German pilsner with a Mexican twist by way of the corn.

I’m currently having a few weeks off the booze so the only beer in the fridge is a can of Why Is The Rum Gone? by 2 Brothers Brewery. It belongs to my wife so I’m not allowed to touch it.

Knock On Wood by Deeds Brewing – an incredible pilsner aged in Chardonnay barrels.

Mosaic Pale Ale by The Mill Brewery – one of the best pale ales I have had in a long time.

We’re just getting into the wholesale market so stay tuned via our Facebook and Instagram for where you can find our beer outside of Warragul and surrounds!

In a much, much larger building which we share with other local producers such as a distillery, bakery and coffee roaster. We dream of creating our own, smaller version of To Øl City.

You can find other entries in our Who Brews...? series here. Drop into Bandolier by heading to 1/132 North Road Warragul and you can find it and hundreds of other good beer venues on our free Crafty Pint app. 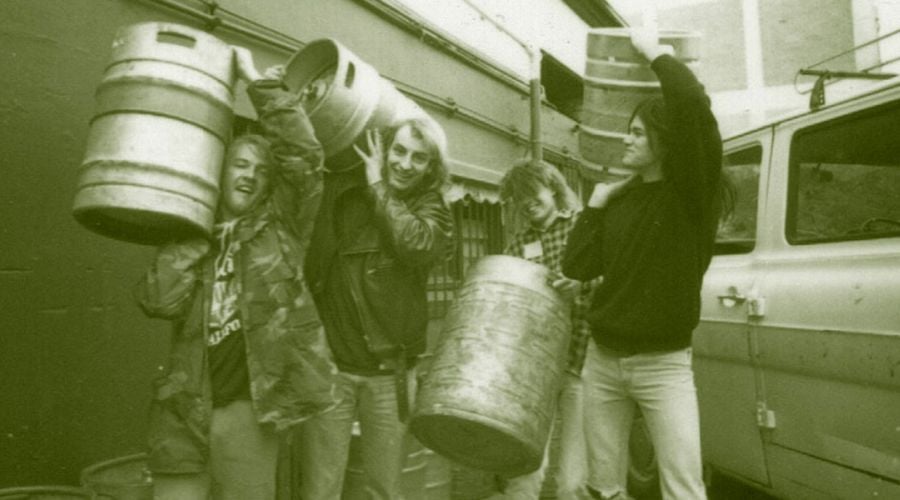