Many fans of hoppy beers will have enjoyed the fruits of Sam Bethune's labours from his time as head brewer at Fixation's Collingwood home.

Since leaving The Incubator to join industry supplier Bintani, he's been building a small brewery at their Mordialloc home where he can conduct experiments to provide the team with greater knowledge to pass on to the brewers and distillers they service.

One hot topic area in which he's been working is biotransformation: how interactions with yeast during the brewing process can elicit new and appealing flavours and aromas from hops. Ahead of his presentation, Where Hops & Yeast Meet, at The High Country Hop Technical Symposium, we got in touch to find out more.

“It’s good to get a bit more across things outside the world of IPAs, which is still one of my big loves and a huge passion of mine,” Sam Bethune says of the role he took on towards the end of 2021.

“It just felt like this really good opportunity to develop a bit more in the industry and explore some more avenues.”

Since swapping the brewing of IPAs for Fixation to become Bintani's technical sales and fermentation specialist, he's found himself in a multifaceted role providing brewers and distillers with technical advice on new products, troubleshooting issues around brewing, and navigating supply chains.

“Trials are a big part of it,” Sam says. “Working with breweries on new hop varieties or new yeast or anything else that’s just launched in the market.”

A major focus has been on putting together a small brewery at their warehouse. It's an idea that Phil and Dale Meddings, brothers who are part of the family that founded Bintani, had been pushing for a few years too.

“I was keen, whether inside or outside of work, to keep developing recipes and playing around in the fermentation space, particularly around beer,” Sam says.

“As a brewer, often we’d get visits from suppliers – it’s usually with hops or yeast and you’ve got to play around with the product – whereas I thought it would be a nice, different avenue to come in [to a brewery] with a finished product of something new, and to present a new yeast or hop in a can of beer that you could discuss or have a taste of later on.”

While the brewery at Fixation's Incubator was a compact, brewpub-suitable size, the kit at Bintani is barely one-tenth the size. The 70-litre Grainfather is effectively a homebrew system, but in conjunction with a benchtop canning line it will give Sam a chance to show off ingredients.

“Quality management is a little harder on a homebrew kit so I don’t quite have anything yet I can put my seal on,” Sam says. “It will hopefully guide some decisions around the use of different materials through actually tasting a beer rather than talking about it on a piece of paper.”

One beer he is ready to showcase is a hazy IPA brewed on Bridge Roads Brewers’ pilot kit ahead of this weekend's High Country Hop. As part of the Technical Symposium, Sam is giving a presentation alongside Kirrily Waldhorn of NZ Hops that looks at how hops work with different yeast strains. As part of the talk, they're presenting three versions the same base beer, each featuring Nectaron hops, fermented with three different ale yeasts.

With broad interest in the area of biotransformation in beer – not to mention ongoing efforts to producer better hoppy, hazy beers – we invited Sam to offer some insight gleaned from his career in brewing and ongoing research at Bintani. How developed is the beer world's understanding of how yeast selection alters the way hops present in beer?

Knowledge in this space is broad and rapidly growing but remains largely based in anecdotal research combined with trial and error within the rapidly growing limited/one-off release direction of the beer market. Given the huge interest in hop flavours and varieties at present this makes sense.

Biotransformation – the creation / alteration / deletion of organic compounds including flavours and aromas – is one of the buzzwords in brewing over the last few years. Yeast is the key player in this, which is why there’s so much interest in this space.

When did brewers / researchers start exploring this interaction?

It’s a little hard to say; there has been interest in this space since brewing yeasts were first identified and isolated around the mid-1800s, with many breweries understandably protective of their house stains and internal IP.

Is it something that has become better understood or given greater focus as new hop varieties, yeast strains, and brewing processes have become more commonplace?

Scientifically, there’s been a lot of specific interest here over the last five to ten years as interest in hops has shifted hugely to flavour/aroma attributes. We now know that yeast and hop interaction can, and often does, synthesise a range of desirable flavour active compounds that may not have been present – or were below flavour threshold – in the original hop profile.

Given these desirable profiles – fruit, citrus, resin etc – we’re keen to learn more about this interaction and use it to our benefit as much as possible.

Great question– I personally wish I knew more in this space! A hugely oversimplified view is that an enzyme produced by the yeast meets a non-aromatic compound from the hops. The two interact, causing a change in the hop compound’s chemical structure, transforming it into a delicious flavour active compound that we can taste and smell. This happens in a multitude of different ways but that’s the general idea.

How much difference can changing a yeast make to the way a hop presents in a beer?

A lot, but this is a complex problem which, outside of the yeast strain chosen, is also heavily impacted by wort composition, beer style, brewhouse hardware, pitch rate, fermentation temperature, starting pH, dry hop timing and quantity among others.

At a basic level, I find the yeast ester profile to be the main factor here, particularly in hazy styles, where hop flavour and ester fruitiness / sweetness are heavily interlinked in consumers’ perception of "hoppiness".

Can a hop variety produce unpleasant aromas or flavours with the wrong yeast?

I’m sure they can, but it’s fortunately not something I’ve come across. Normally beers with unpleasant hop character are a result of poor brewing practices, or poor quality ingredients. This is far more common than a hop/yeast interaction problem.

Is there still more to learn in this area?

What is the purpose of the beers brewed for the High Country Hop's Technical Symposium?

We also wanted to provide an objective framework with which to evaluate Nectaron’s interaction with three popular types of ale yeast: the neutral US-05 US strain, the fruity / estery S-04 English strain, and the moderately fruity K-97 German strain.

And finally, we felt we should provide some much-needed refreshment during a day of largely technical focus!

Where can brewers, or indeed interested beer drinkers, find out more?

Come to the Symposium, of course!

Or if you want better researched info, check out A Scientific Guide to Hop Aroma and Flavor by Scott Janish, Yeast Strains and Hop Varieties Synergy on Beer Volatile Compounds by D Steyer et al, or any of the great presentations by Graham Eyres of the University of Otago or Tom Shellhammer of Oregon State University.

Tickets are still available to both the High Country Hop on Saturday, April 2 and the Bintani Technical Symposium on Sunday, April 3.

You can check out another article on a brewer playing with new ingredients and processes in our feature on Glenn Harrison from last year. Once the party was done and dusted on the Saturday of The High Country Hop, industry figures gathered for the Bintani Technical Symposium at Beechworth Town Hall. Now you can catch up on the presentations. read on Matt Marinich has been one of the leaders when it comes to education in the Australian beer world for years. And this month, he's become an Advanced Cicerone, the first in Australia – and, indeed, the Southern Hemisphere. read on 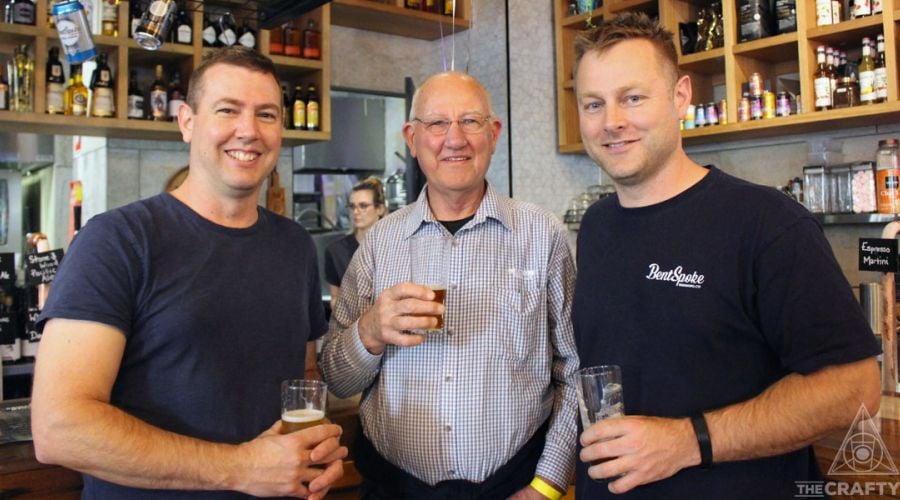 He might not be a household name but if there's any craft beer-loving household in Australia that hasn't enjoyed the fruits of Pete Meddings' labour, we'd be surprised. read on