A new Sunshine Coast-based brewing company showcasing native ingredients from across the country is set to launch later this month. Jarrah Boy Brewing is the latest venture from Dale Vocale, an Indigenous chef, entrepreneur and proud Monero Ngarigo man, who has been developing the idea since 2019.

“I had food trucks for around seven or eight years,” Dale says. “I was going to all these events and festivals and serving food in breweries; I was using native ingredients in all this street food and I felt like I needed beer to match it.”

A lack of events during COVID forced Dale (pictured above left with Boiling Pot brewer Pedro de Luca) to stop running his food trucks in Victoria; so, following a move to the Sunshine Coast, he started connecting with the region’s vibrant beer industry, as well as with Adam Murphy, who previously worked as CUB's head of innovation, and along with a few other advisers began developing Jarrah Boy.

The Jarrah Boy name stems directly from his ethos and goal for the brewing company, which is to support other First Nations-run businesses and to kickstart conversations about Indigenous cultures.

“It was around trying to reach out and branch out to support local growers,” Dale says. “We can get their money back into their businesses and then help them with farming and cultivating more land while branching out.

“A lot of this stuff is grown out in remote places where Mob are and they want to stay there and be able to build their businesses there as well."

The first beer, Tirum Sun Lager, is named after the Kabi Kabi word for sun. The golden lager uses native yams sourced from Something Wild – a business run by AFL great Daniel Motlop, who has his own alcohol business, Seven Seasons. That will be followed by Gwangal Red Lager, which uses Jarrah honey from Indigenous beekeepers in WA, while the third release will be a dark lager named Mulu, for which they’re keeping the additional ingredient under wraps for now. Each beer will bear a traditional Aboriginal name from either Dale's ancestral Monero Country around East Gippsland, or the Kabi Kabi language of the Sunshine Coast.

While he has been homebrewing for some time and has plenty of experience bringing native flavours to beer, Dale knew he needed help launching Jarrah Boy. As such, the beers are being brewed at Boiling Pot, in Noosaville, where owner John Madill was eager to support Dale's vision and where he was able to work on recipes with brewer Pedro de Luca.

“When it comes to doing a large-scale beer,” he says, “you need that scientific knowledge to do it, so that’s where I needed some professional help.”

He says his desire to showcase different ingredients and Indigenous cultures from across Australia is driven by a hope that all Australians can better understand the diverse range on offer. While native ingredients are increasingly common in menus, they more typically appear in fine dining spaces rather than casual environments; by showcasing them through beer – in a similar manner to fellow Indigenous-owned non-alcoholic brewing company Sobah – he hopes to bring them to a wider audience, start conversations and “encourage all Australians to yarn”.

“We’re eating some native bush foods-infused foods all around Australia now and you’re seeing it come alive on your television shows,” he says, while adding how such ingredients are important beyond the support they provide to those growing them.

“The stuff that we want to buy is grown where it's supposed to grow. A Desert Lime grows out in the desert and it doesn't need water fed to it because it grows wild and it drinks the water that needs; and there's so much nutritional value in some of these fruit and vegetables.”

Given the support from Boiling Pot, Jarrah Boy’s story is already one of collaboration even before the first beers have been released. And Dale hopes his project can continue to build connections, as he has done throughout his career as a chef.

“And I’ve always wanted to teach apprentices the best way to learn, and if I can bring a bit of my culture into that, then why not?”

Jarrah Boy Tirum Sun Lager will be available on tap and in cans around the Sunshine Coast from October 20. 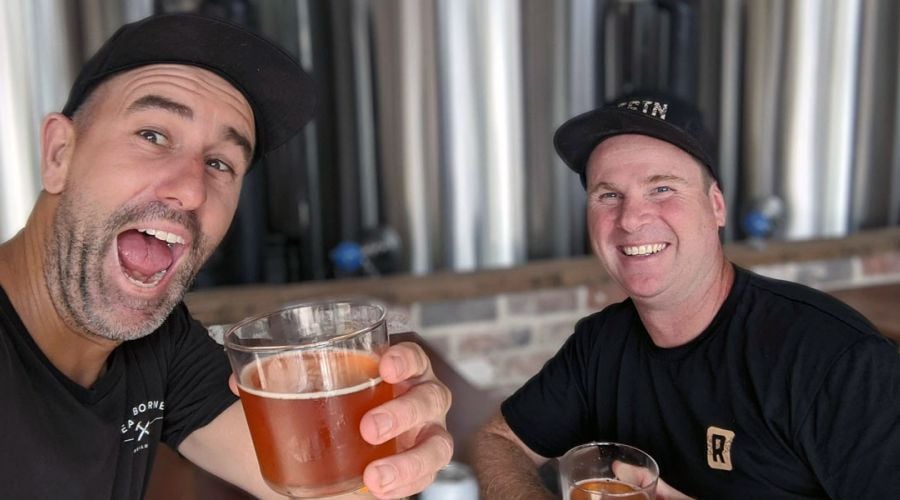 Waiting To Be FOUND.

FOUND. is an ambitious brewery and hospo project set to start taking shape in Perth later this year. We caught up with Steve Finney, the ex-Little Creatures, Feral, Gage Roads and Otherside man who's been working on his vision for seven years. read on