Do you remember what you were doing ten years ago?

Jason Harris and Craig Basford certainly do: they were launching Big Shed Brewing Concern in Adelaide’s suburb of Royal Park. A decade later, this weekend sees them hosting a three-day birthday bash to celebrate the milestone and say thanks to their loyal staff and longstanding fans.

Craig says it feels like it’s gone by quickly and slowly at the same time; looking back, he’s both proud and surprised by their growth over that period.

“If you said to me ten years ago that we'd be sitting up here in our second site with a separate cool room and with a brewery this size, I would have said you're mad.”

Big Shed started out with a small brewery in Brandwood Street in the Adelaide suburb of Royal Park, where they later opened a venue that steadily grew over time, before securing their current – and far larger – shed in 2018, a short drive away in Old Port Road. The move saw them scale up to a 50-hectolitre brewhouse and today they employ around 60 people, and count former South Australian National Football League chief and regional director for Lion in SA and the NT, Jake Parkinson, as their CEO.

“I think back and remember ten years ago,” Craig says. "Standing in the empty space at Brandwood Street, saying to Jason, ‘We’ll never fill this.’

“Now we’ve filled it three times over with tanks and humans.”

Prior to that, Craig and Jason had spent a decade brewing together after meeting while working in IT. While a love of beer inspired them to start the brewery, they soon realised running and growing such a business wouldn’t leave them much time for that.

“We started a business because we love making beer, but it was the first thing we gave up; a brewer was the first person we employed,” he says. ”Now we have 60 staff across the front of house and the back – it's insane.”

Jason adds that not only have they built a business of which they're proud but they’ve also managed to do it with the pair staying at the helm while remaining true to their original ethos.

“We’ve built what I think is a pretty impressive ten-year-old business on the back of Craig and myself still owning more than 90 percent of it,” Jason says. “It’s not like we've crowdfunded or found 800 investors – it’s still two blokes.”

Jason says while no two days is alike, he’s always happy to walk into the brewery and see the place filled with the customers who have embraced Big Shed for their beers and as a local and community hub.

“There's a pride in walking into your workplace every day and there are people here that are here by choice,” he says. “I get just as excited when people say they come here because we make great burgers or have great music as I do when they say we make great beer.”

When it comes to the future, them admit owning and growing a brewery is a constant challenge, with a desire to constantly improve acting as a driving force.

“We always look at it and go: what’s next?," Jason says. "How do we do it better for customers and for staff? It’s a neverending cycle of excitement, stress, annoyance, frustration, excitement, stress – and it just keeps going.”

As Craig puts it: “We're never going to die wondering. So let's swing and if it falls over tomorrow, we’ve had an amazing time.”

As they celebrate their milestone, we invited Jason and Craig to reflect on their first decade as Big Shed in another entry in our Ten Lessons From Ten Years series.

1. You know what! We have actually survived well more than ten years; it's just ten years publicly as a business. We spent years just toiling behind the scenes with a business, not selling to anybody but just doing R&D, mucking around and maybe drinking too much beer.

2. Together with you, the Big Shed drinker, we have not only built a business, we've also built a community and we have you people who buy Big Shed all over this country to thank.

3. At any time, no matter how hard building and now running Big Shed Brewing has been, the next day our staff, our clients, and the wider industry will lift you back up without warning. It truly is like no other industry I have been part of, so thank you.

5. How good and bad are people on Untappd? I’m sure they forget there are actually a lot people behind those beers and brands who sacrifice a lot. I bet the majority wouldn’t say those things to their face.

It's taken us ten years and a pandemic to truly understand why we are here. We originally started a brewery because we loved making beer, yet the first person we employed was a brewer.

In fact, it is the connections made around beer that are why we love it: sharing beers with mates, having people come to the brewery to celebrate wins and commiserate losses. We’ve had everything from engagements and weddings, baby "head-wetting" and wakes.

They all share the same goal which is connection, and that we love.

2. Don’t get a dog and bark yourself

One of my favourite sayings. Simply find good people who are good at what they do and give them the freedom to be good. It rewards you, the person and the business.

3. You don’t get a front without a back

By that, I mean you cannot reasonably expect to get the best of humanity without occasionally getting the worst. The fact is they are part of a whole and the minute you accept that you are better equipped to deal with things.

It needs to be noted that "acceptance" doesn’t mean liking it, ignoring it, or not trying to change it. It means not fighting against what has already happened and instead start working towards a solution.

Following on from above, things are never as good or as bad as they seem. The trick is to treat both ideas and feeling with equal scepticism and try and look rationally at a situation. It’s not always easy.

5. You are not that special

Not in the negative sense, dear reader – I think you’re amazing. What I mean is that the things that unite and connect us as people run a lot deeper than those that divide us. If you have an idea that you think is great and your team think is great, chances are you’ll find enough punters who agree with you to make it work.

If you'd like to join Jason, Craig and the rest of the Big Shed crew for a weekend of beer, food, tunes and good times, then you'll find the details of how they're celebrating here.

You can read the previous entries of our Ten Lessons From Ten Years series by heading here.

[A little disappointed there was no mention the Pint of Origin Tasmania event at an early Sydney Craft Beer Week where we had no Tassie brewers in attendance so they – and others – pretended to be different Tasmanian brewers for the unsuspecting punters. Craig was particularly spectacular as he regaled a young couple over their dinner, if I recall correctly – Editor]

Articles by Will
ten lessons from ten years big shed 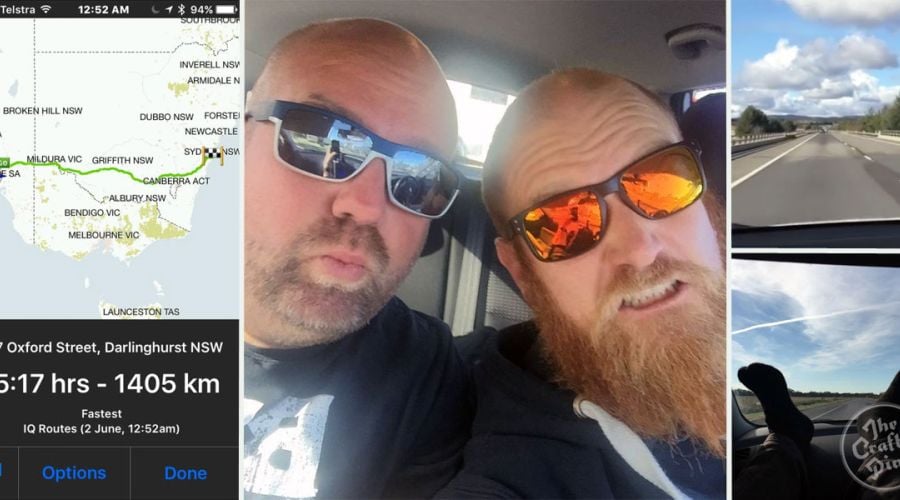 When it comes to delivering the message of "Fresh is best", has anyone gone to greater lengths than the duo from Adelaide's Big Shed Brewing Concern? Matt King reports on their unique Cannonball Run of beer. read on