As far as brewery mascots go, it seems you could do a lot worse than a lizard.

Sure, there are no doubt people who visit Dusty Lizard in Wollongong for a beer, a catch-up with mates, or to sink a few while watching sport on one of the screens in their brewpub, but for many their first port of call isn’t the taps... it’s Dustin the bearded dragon.

“Everyone seems to love him,” says brewery co-founder Nathan Harris. “When most people walk through the door, the first thing they do is go and say hello to him. Personally, I’d go to the bar and then go say hi.”

Dustin's journey from humble reptile to taproom favourite stems from the moment Nathan and the other founders - Anthony Arnold, Carina Jordaan, Timothy Boylan, Ryan Cram and Charanjit Singh - finally landed upon a name for the brewery. As the founders were tearing apart the building in Smith Street, one commented that it was a “dusty lizard.”

The name immediately clicked with the six of them so, at the same time as they were building their venue – and inspired by a past meeting with Catty the catfish at The Catfish bar in Melbourne – they started searching for a lizard to join their mission to further enrich Wollongong and the wider Illawarra’s beer scene.

“He’s a rescue lizard; he was dumped in the wild then found and then adopted by a reptile carer,” Nathan says.

“They can’t fend for themselves when they don’t know how to. But he’s very happy where he is now.”

His happy place first opened first opened to the public at the end of December 2020. It was a time when lockdowns looked to be a thing of the past. But COVID had other plans and the turbulence of the pandemic saw the arrival of their brewery delayed so, for the first few months, Dusty Lizard was a local bar serving beer from the region's other breweries as well as those from further afield.

When their equipment was finally ready to go, the long lockdown that hit New South Wales in 2021 forced them to pivot once again.

“All our brew gear turned up six or seven months late,” Nathan says. “By the time it turned up and we got it commissioned, the second [NSW] lockdown happened. We had three beers ready to go so had to change our plans and get canning straight away.”

Today, most of their ten taps are filled with the beers brewed on the 400-litre brewery lining the wall behind the bar. In something of a rarity for a modern brewpub, you're always likely to find a couple of dark beers pouring given that's where some of the owners' tastes lie, and they still pour beers from other 'Gong brewers too, something that's increasingly easy with Five Barrel, Resin, Seeker, Principle and Reub Goldberg Brewing Machine all found within a short drive these days.

The venue itself keeps things simple. The bar and brewery line one of its redbrick walls, while Dustin lives on the facing side between pallets adorned with plants and beer memorabilia. Outside, a white fence wraps around a beer garden where a rotating lineup of food trucks make themselves at home.

Given they had no brewery during their first summer of operation and spent the second one dealing with the raging Omicron wave, they're looking forward to a rather more normal tourism season this time around, even if La Niña means there's no guarantee of good weather yet.

“I’ll just be happy if it doesn’t rain for a while,” Nathan says.

As they prepare to celebrate their second birthday, we invited them to tell us more as part of our long-running Who Brews...? series.

Nathan Harris (pictured above) – I’m one of the six owners. Before this, I was a plumber that liked craft beer a lot.

We all met by chance and of course our shared love for, yep, you guessed it: beer. It started out as a bit of pub talk amongst the group which prompted me to start searching for properties. I occasionally found something of interest – enough to make some inquiries – however, it turns out not many landlords were keen on a brewery or bar moving into their property.

By this time I had spoken to one of the other founders, Ryan, and realised he had been looking as well. Together we continued to look until this cool-looking space in Smith Street caught our attention. It had high ceilings, roller door access and the added bonus of the owners being excited for us to move in.

We then reached out to the other four – Timmy, Chas, Carina and Arnie – who were keen to jump in on our new adventure and then the fun stuff began in terms of the development application, liquor licence and renos.

I have been a lover of craft beer for a long time, homebrewing for many years enjoying days in the garage. After a work injury, I thought I would be one lucky man to turn a hobby that I enjoyed into a job.

I guess it all started when I was about 23 and we had just bought our first home, so we were in debt with minimal remaining beer funds. It was time to start making my own beer so I could keep enjoying a few cold ones after work.

I'm going to say it was up there with one of the hardest things we had to do – all kinds of names were popping up on our group chat. I had a moment with the word lizard, which kept coming up when throwing names around but we just couldn’t find the right accompanying word.

Until we started knocking down walls and someone said it was a "dusty lizard" and it stuck. Plus we also wanted a lizard as our mascot, aka Dustin, our in-house central bearded dragon.

We had a local tap takeover a few weeks back and out of those I think the Flame Tree Amber Ale from Resin was my pick of the weekend.

At the moment, only at the brewery and the occasional keg to a few local pubs.

I'd like to think we would be in the same location with a larger scale brewery in a separate location that just makes beer with no bar.

You'll find Dusty Lizard Brewing at Shop 2/102 Smith St, Wollongong. It's also there alongside hundreds of other breweries and good beer venues in the free Crafty Pint app – the most comprehensive, curated guide to finding craft beer across Australia.

Articles by Will
who brews? dusty lizard wollongong 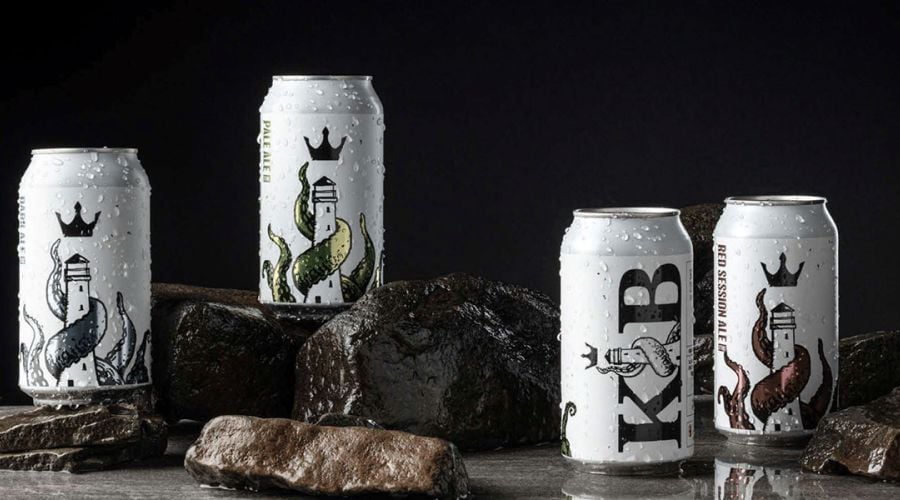