"You know what they say: it takes a lot of beer to make good wine.”*

So says Nicole Brasier, part of the team at Fourth Wave Wines that has released a trio of beers under one of their wine labels, Little Giant.

With so many brewers looking over the fence to winemakers for grapes and barrels, perhaps it was only a matter of time before winemakers started peeking back over the fence. So when Fourth Wave co-owner Nicholas Crampton wanted his team to make some beers for the company’s portfolio, Nicole turned to The Craft & Co in Collingwood.

“We do quite a bit with them with spirits, developing vodkas and gins with them,” she says. “We’ve grown to have quite a good relationship.

“We thought it’d be a fun project to make our own beer [with them].”

While the names of the beers – Pale Lager, Strong Pale Ale, and Red Lager – would be at home in pretty much any craft brewery in Australia, the liquids themselves are closer to European styles than modern craft styles. In house, the team have been referring to the Pale Lager as the "Belgian pilsner" and the Strong Pale Ale as the "Belgian pale", and Nicole admits to being excited at the prospect of working with the less common, yeast-forward styles.

“Coming from a winemaking background, we’re always looking at yeast characters in wine,” she says. “Looking at the [Aussie] beers we’re drinking at the moment, they’re often hop-focused. You don’t often step back and go, ‘Yes, these are yeast characters.’”

Nicole developed the recipes in partnership with The Craft & Co team, as well as heading in to the Collingwood brewery for a few pilot brews and working with the brewer to tweak the recipes.

While her career is in wine, Nicole has dipped her toe in brewing in the past, both as part of her winemaking course at Adelaide University and while homebrewing as a team activity in a past job as a winemaker.

“I love beer! I would love to do more brewing,” she says. “In winemaking you have one chance at making a product every year; it’s great to think in the beer world you can create all year round so less limitation and more room for creativity and innovation."

It seems this opportunity to keep creating has given Nicole the brewing bug; there may soon be more funky little bottles with the fat wombat on the label.

And while you’re watching, enjoy this Who Brews…? with a difference, where Nicole answers some questions about the Little Giant beers.

What’s your role with Fourth Wave? What does your job usually involve?

My role with FWW involves overseeing and developing all our liquid assets. Previously our focus was on wines, where my winemaking background was relevant, however in the past couple of years we have been developing spirits and beers and growing these products in our portfolio. Day to day I work closely with winemakers, brewers, and distillers in product development and communicate ideas, workshop recipes and tweak these developments until we get the product we are happy with.

Little Giant is a wine label… how’d did the idea of making beers come up?

The company director has fond memories of drinking beer in Melbourne at certain specialty bars where he could walk up and try a different beer off tap every time. The Belgian styles still resonate with him, so we have adapted the Little Giant wine label into a beer range paying tribute to these styles and his nostalgia.

Our Little Giant wines are generally more robust styles of wines, so when we looked for a brand to align our Belgian style beer development with, Little Giant was a no brainer.

Did you do most of the recipe development, or was it more of a collaborative process with The Craft & Co?

Definitely a collaborative process. We worked closely with the team at The Craft & Co and gave them a brief describing three examples of Belgian beers that we wanted ours to reflect stylistically because we enjoyed drinking them: great flavour and style, high quality and well made!

How did you approach choosing the styles and flavours you were going for?

A lot of the new beers coming out today are heavily-hopped styles and we were looking to do the opposite by championing the yeast and malt over the hops. We create the Pale Lager to be refreshing and crisp, your go-to beer on a hot day in a pilsner style. The Strong Pale Ale, we wanted the body of the beer to come through from yeast characters and exhibit more esters and tropical notes from the yeast. The Red Lager we were looking to achieve heavy toast and bitter characters from the mix of malt used together with some dark red fruit and spice characters.

Can you tell me a bit about where you landed with each of the recipes themselves (ingredients, processes etc)?

The Pale Lager has a "less-is-more" approach achieving a light crisp style. We use a clean and strong fermenting yeast, Pilsner grain and noble Saaz hops for bittering to remain relatively neutral. The Strong Pale Ale we use Pale malt and Abbaye yeast that contributes most of the flavours and aromas, then ferment this on the warmer side to encourage production of esters. The Red Lager we use a mix of Vienna, Carared and Melanoidin malts and ferment with a neutral yeast and hops so that the flavours we are achieving are coming from the diverse mix of grains, rather than yeast and hops.

How was it for you as a winemaker shifting gears from wine to beer?

Fun! As winemakers we obsess over fermentation(s), so operating a different pH and fermenting different sugars was fun! Turns out the same principles apply: cleanliness, healthy yeast… and oxygen is bad!

What was enjoyable about it?

Developing and creating the product is always the most enjoyable part. Working with passionate brewers and hearing the way they speak about their passion and just general beer chat (and tasting)!

Was there anything particularly difficult or unexpected in developing the beers?

One of the more difficult things to understand from winemaking to brewing was the tweaks you can make post-ferment. In winemaking there are a lot of "one percent" tricks to help finish a product, and not yet having this experience and knowledge in brewing definitely proved more difficult, but shows that there is always space to learn.

*Actually, I didn’t know they said that, but I’m glad to hear winemakers use beer as their inspiration juice.

You can read other entries in our Who Brews...? series here.

Articles by Mick
who brews? the craft & co 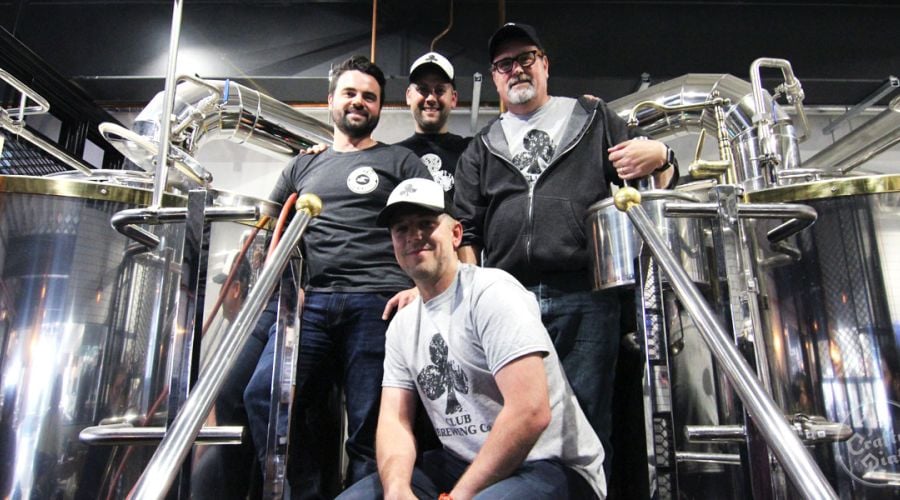