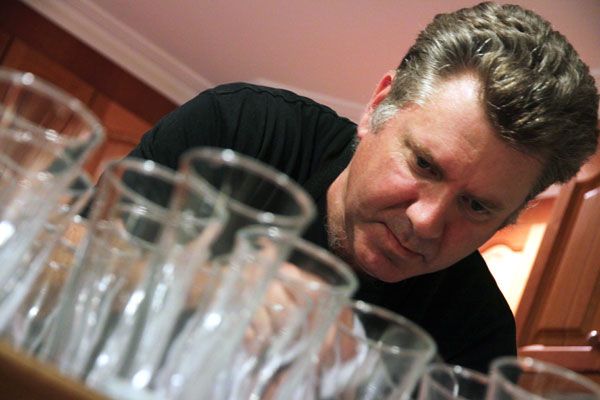 After a couple of lager-centric panels to kick off what are now monthly Blind Tasting Panels, the third showdown saw a sharp shift in direction into the beer style that is probably closest to the hearts of more craft beer lovers than any other: IPAs. As our resident beer lover panel member (who may well warrant his own breakout box of comments each month) said as we kicked off:

“Someone is going to bring me IPA for the next hour and a half. This is the best night of my life.”

As in the second panel, the lineup consisted predominantly of beers from Australian craft breweries alongside a smattering of internationals. All are available fairly readily in Australia and all were picked up from bottleshops around Melbourne, which are listed alongside the results below.

We had considered contacting breweries direct to get fresh stock, but when we were discussing the Panels with Feral head brewer Brendan Varis last time he was in Melbourne he was very strongly of the opinion that one of the strengths of what we are doing is that it is distinct from beer awards judging. Yes, the panel features a number of brewers (this time including an AIBA judge). Yes, it has an AIBA Steward serving the beers. But, while brewers have the chance to send their beer in peak condition when entering beer awards, here we are judging what punters can buy off the shelf, which in many ways is more relevant to our readers.

The panel was expanded this time to six, featuring The Crafty Pint’s founder, the aforementioned beer lover, a beer rep from Mountain Goat and brewers from Hargreaves Hill, 3 Ravens and Boatrocker. The thinking is that more participants should give a fairer result. The scoring system remained the same: five points each for appearance, aroma and flavour with ten available for overall impressions, giving a final score for each beer out of 25.

There was a calibration beer – the Australian Brewery’s canned Pilsner – to get everyone attuned before 15 beers were presented by the inimitable Professor Pilsner (pictured above) in two bursts (with a break after eight to try and reset palates after a hop assault). By the end of the evening, with scores tallied, there was a very, very familiar winner,with scores consistent across the panel. In fact, only one beer to finish in a panelist’s top three was outside anyone else’s top five. The only two English IPAs in a predominantly New World IPA field (Gage Roads and White Shield – the latter thrown in as a zinger) appear to have suffered as result, although scored pretty highly with the panelists who picked them as such. Perhaps they should have been left out; perhaps they should have been announced as English IPAs beforehand?

Anyway: the results. And another round of applause for the team at Feral – hogging the limelight again after pipping Hopwired by 0.2 out of 25 – with the only beer to finish in every panelists' top three.

(The calibration beer’s score would have placed it in 8th)

“Even my burps taste good after that one.”

“That smells like I wanted my aunty’s pillow to smell like when I slept over when I was six.”

“Dry-hopping is just like dry-humping… except you get a better result.”

“That smells like a funhouse with legs!” “What’s a funhouse?” “Something without legs, probably.”

As beer 14 is delivered: “My nasal palate is absolutely shot.”

Next up in April – Saisons

getting blind with crafty ipa