Late last year, when compiling the list that would become 150 Great Australian Beers, we put a shout out to any Australian breweries who had packaged product we may never have come across before. One of those to respond was Rehn Bier, a tiny operation in South Australia. They sent in three beers with their rich, voluminous Extra Stout making the pages of the book.

A year on, Matt Carty tells us more about the brewery that sells pretty much all of its beer within 100km of its Barossa base.

A couple of months on from reporting that former nano-brewery HopDog BeerWorks had scaled up their brewhouse we turn to another small scale producer with views of up scaling, this one in South Australia. Rehn Bier is based in the Barossa Valley and produces between 80 to 110 litre batches of small artisan brews on a brewery setup in the ultimate backyard brew cave.

Brenton Rehn has been brewing for about nine years and decided to open the brewery with his wife Robyn in July of 2011, with commercial brewing beginning the following year.

Rehn Bier produce a wide range of styles in which they look to offer something for everything, from a 4.2 percent, maple syrup-infused Maple Porter, 4.6 percent summer wheat ale and XSB strong English bitter to the creamy oatmeal Extra Stout, fruity, spicy Belgian Tripel, an Imperial Stout with new world hops and even an Olde Strong Ale: 9.3 percent ABV and aged in old Shiraz barrels for seven months.

"I know this will sound a bit lame but I enjoy brewing all styles of beer," says Brenton. "The reason is that every style is different so the challenge is different and that keeps things interesting.

"For me a beer needs balance. I'm not into shock value beer; I've tasted some and thought, 'Well, I won't have to try that again!'."

Having a brewery premises in their own backyard means that Brenton and Robyn have the freedom of being on site 24/7, which allows them to check ferments and generally keep an eye on things at all hours, day or night.

"Set up costs were also lower than a commercial property," he says, "which was a cost effective way to go for a start up and now sales are really good."

Even though they were able to save a lot of trouble setting up a home-based brewery they still had to undergo the same trials as anyone else in regards to applying for their excise and producers licenses. 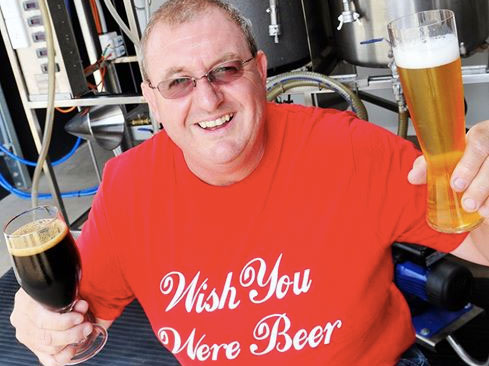 "I think at first they didn't know how to take us," says Brenton (pictured right). "I don't think they have many applications for home-based breweries. But we gathered all the information, set out all of our systems and procedures and in August 2012 the ATO granted us our excise license."

For those of a technical bent, Rehn Bier is brewed on a modified 'Beerbelly' rig. It was the first one Wayne from Beerbelly built and consists of the standard brewery kit including grain mill, cold liquor tank, hot liquor tank (electric), mash / lauter tun, external wort heater (electric), grant box, kettle (gas), whirlpool and plate chiller.

Depending on what he's brewing, Brenton will knock out two or three batches on any given brew day and may brew the same beer on two or three days. After primary fermentation is complete they blend these small batches into a single bright beer tank, which gives them around 500 litres of each beer at the end of the process, ready to be hand bottled and hand labelled and sent out to customers.

Before Brenton opened the brewery he under took a home study course in chemistry, completed two brewing short courses, one at Regency TAFESA and the second at the University of Ballarat, and received consultation from Nelsen Brewing Services, which he says was a great help with some technical information.

In the not too distant future, Rehn Bier hopes to upsize their brewery, establish a commercial premises and become a microbrewery rather than a nano-brewery.

"We are also looking to do more specialty beers and there is really no limit," says Brenton.