Way back before The Crafty Pint even existed online, as we brainstormed ideas for stories and features on the site, a mate said we should make sure we included the readers we hoped to attract to the site. As a standup comic we figured he'd know a thing or two about giving the people what they want so added his idea to the "To Do" list. More than four years later, um, well, er... Let's just say the "To Do" list has been a highly flexible and evolving thing.

Still, having finally launched a few other regular features since getting Crafty Pint Mk II off the ground, here it is: Beer Nuts. We've turned the spotlight on brewers a-plenty, started lining up craft beer heroes from elsewhere in the beer world and allowed bloggers and podcasters their say and now it's time for you, our dear readers, to shine. We'll be asking questions of some of the most colourful characters around the Aussie beer world, starting with James Swinglehurst, AKA A Craft Beer Ideot.

We first came cross Jimmy on Instagram about a year ago when we became so enamoured of his combination of stylish shots and Python-esque accompanying lyrical flights of fancy – always verbose but always entertaining and always featuring a guest spot from his girlfriend – that we invited him to be on the panel of the Craft Beer Rising Blind Tasting event we'd lined up for the Grain Store in his hometown. One herniated disc later and we were unable to make it to Newcastle, which meant the tasting never happened. So here's our chance to make amends by inviting him to be the first Crafty Pint Beer Nut.

I'd love to say that I'm a millionaire comedy writer whom spends all day penning hilarious Internet jokes and all night drinking Cantillon with MMA fighters and female volleyball champions aboard my speedboat. So I am going to say that, but my payslips say 'IT manager' for some reason.

Beautiful Newcastle, NSW. I may have been birthed on the cold dark top part of our planet (under a waxing blood moon) but this quirky beachside town is most definitely where I would call home.

I believe there is a time and a place for each and every one of these types of people, and honestly I've probably been all of them at one point, but if you were to boil me down to my solid adamantium skeleton I think you'd find that I'm nothing more than a craft beer advocate. I'm a true believer in making great friends and sharing great stories over a really good beer. I do tend to take the piss out of Corona a lot however (they come in buckets), so I guess I am touch wankerish.

I think I was only diagnosed around three years ago, but I believe I suffer from a pretty acute case of OCD (obsessive craft disorder).

I love great flavours and have always been into crazy hot food, good strong coffee and salty cured meats etc, so I think strong and flavoursome beer is just an extension of my flavour palette. Also, I thought it would make me look cooler in bars if I ordered fancy beer. How right I was.

I have an recurring alarm on my phone that goes off at 6pm to remind me to drink every day.

Funny you should ask, Crafty! I do, from time to time, write about the nuances and intricacies of great beer on Instagram and Facebook, why not take a look, dear readers? My account is easy to block so there's really no reason not to. Also I ask my girlfriend to try each beer and secretly document her response at the end of each review. You're gonna love it as much as she does! 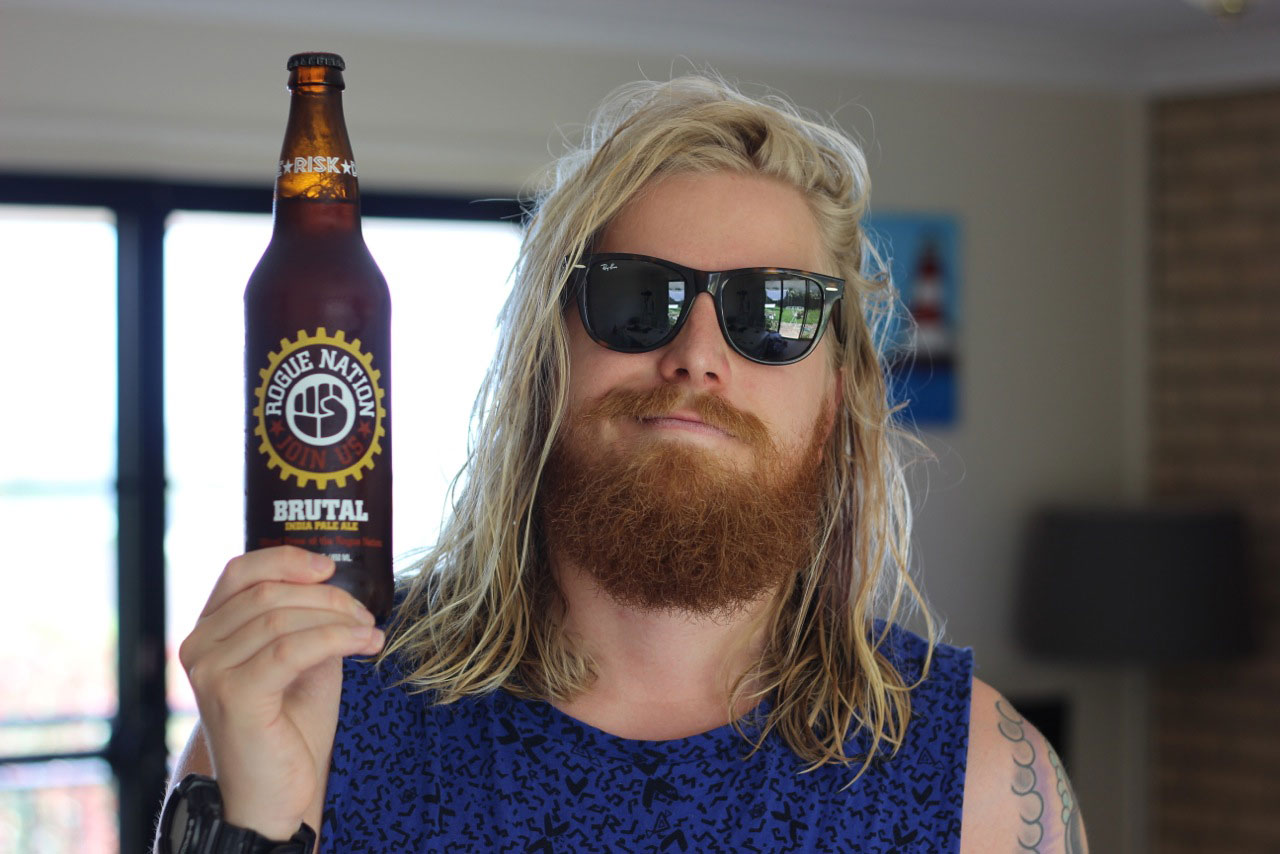 My mind is easily blown, I am lucky enough to live down the road form Australia's best craft beer bottleo, Warners At The Bay. The guys there have a liver-crippling selection of amazing brews from all over the world but if I had to really pick my favorite breweries it would be BrewDog from Scotland for their wild commitment to pushing the craft envelope, Epic from New Zealand for the same reason and Sixpoint from the USA for going big on their IPAs and putting all of thier beers in cans. My all time favorite beer is Sculpin by Ballast Point.

I really have never been a big Belgian beer fan, I know it's sacrilege but I'd rather enjoy a malty or hop- forward brew over a yeasty boozy one. That's not to say all Belgian beers are yeast bombs, but A LOT of them are, and banana and pear flavours belong in cider, not beer. Sorry, Jean Claude Van Damme (I'm not sorry).

I think I only own about seven. All hard earned and vomit stained.

I've got quite a few glasses now, maybe eight distinct types. My favorite one is by a company named Craftd Glass from Melbourne [Note: we've been meaning to catch up with these suave chaps for a while but life at Crafty Towers is so crazy at the mo this may well be early 2015], it's in the shape of a can and if you didn't know, I'm like the Junior Vice President of Can Relations to the – I think every beer should be canned and bottles should be retired, and possibly made into windows or something useful – like more beer glasses.

Apart from the fridge, of which I have one dedicated solely to beer, no, but I do have a beer pong table which was sent to me by Matso's Brewing. It's not exactly a shrine but people know that when I bust that baby out it's time to worship at the feet of the pong prince.

That's a good question and difficult to answer. Although I'm a relative newcomer to the craft beer scene I've been fairly active in seeking out at least three new beers a week and I try to taste every new beer on tap in Newcastle's rad craft beer pubs, so I'm gonna say just shy of 800 (this doesn't include macro brews of which I've forgotten more than I can count).

"Hey, they're asking how much money I spend on beer a month, bro?" 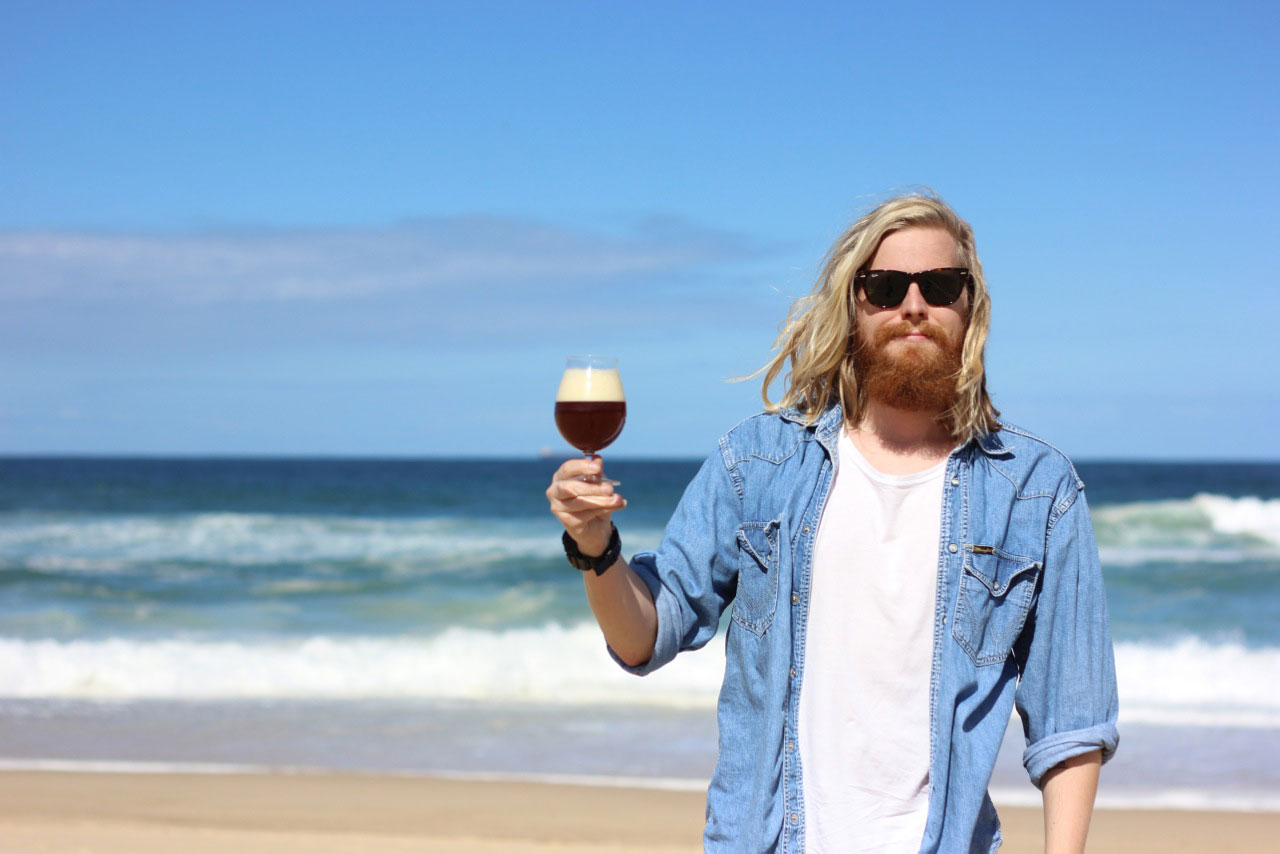 OK, so I've been excited about answering this one because as a dedicated home brewer I'm always chasing that elusive perfect beer, but also being a home brewer I know that the only place that this stuff exists is in my dreams, because I suck at it. On paper I'd love a really dank, piney black IPA sitting around the 7.5 percent mark, poured cold from a can, possibly with a cool scorpion or wolf on the label. Either is fine.

She carefully read through my answers to the questions, nodding at particulary funny parts. "It's good, Jimmy, but not as good as Bublé!"

Then she quickly turned up her Bublé Christmas album to drown out my protests.

Thanks for being our debut Nut, Mr Ideot. Set the bar pretty effin' high, we'd suggest.

Anyway, we'll be bringing you one of these every month and have a few ideas in mind for future Nuts. But if you are – or know of – a colourful crafty character that belongs here, feel free to email us and tell us who and why. Cheers! Beer Nuts is an occasional feature we run that shines a spotlight on people who take their passion for good beer to the extreme – and sometimes beyond. Here, we step inside the beer cave of Leith Booker. read on