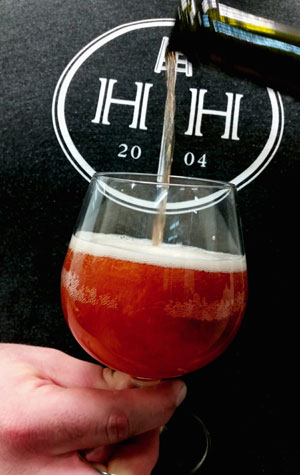 It wasn't too long ago that many of the limited releases coming out of Hargreaves Hill in the Yarra Valley were experiments with hops: a series of fine IPAs, the occasional pilsner. These days, more often than not, when a short run beer leaves the brewery it's as likely to have spent time conversing with oak and / or been dosed up with some form of bacteria or funky yeast.

The first such release was last year's Cherry Harvest Sour, a beer that began as the run off from last year's Phoenix Imperial Red Ale that was left to naturally sour before being fermented a second time with cherries. The year's vintage has been made with Yarra Valley Morello cherries, barrel aged and fermented with multiple strains of yeast and bacteria.

The brewers tell us the resultant beer is a "restrained yet complex trifecta of fruit, oak and wild ale." Which, extrapolated somewhat, means a "gentle cherry aroma harmonises a complex bouquet of fino sherry, almond and light cream. Pleasant dry oak character on the palate balances a gentle acidity, promoting a long soothing finish with minimal hop bitterness."