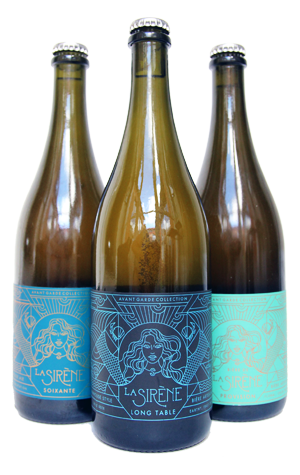 They don't like to sit still too long at La Sirène, the Alphington based "urban farmhouse" brewery. In addition to finessing its impressive and expansive core range, it produces a seasonal Botanique range experimenting with herbs and spices, has released barrel-aged and spontaneously fermented beers and, last month, filled its custom built coolship for the first time. And, alongside all that, the brewery has just unveiled a trio of table beers going under the Avant Garde banner, each featuring a new, yet equally stunning, look from the core beers.

The end result has been achieved by allowing three different beers, each containing one or more strains of Brettanomyces, to age in bottle at the brewery for six months or more. At points, the brewers feared some of the experiments were going to go awry but patience paid off (except in the case of a fourth proposed experiment in the range that didn't develop to where they hoped) and all three are now out in 750ml bottles.

Provision is probably the most "table" of the table beers, weighing in a just 3.8 percent ABV like their Saisonette, and presenting with lively floral and fruity characters, as well as a refreshing and cleansing acidity as the Brett here shows off its fruitier rather than funkier sides.

Next up in the weight category is Long Table. This 5 percent drop spent nine months cellaring and has a greater level of malt sweetness as well as more noticeable rustic qualities: not the full on barnyard or horse blanket funk one can get, but those characters are certainly hinted at alongside flavours and aromas more familiar to those who know the brewery.