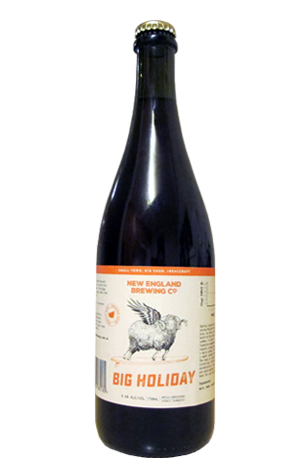 Whether it’s the symbolism of the sharing of St Nicholas’ fortune, the historical scarcity of the fruit or simply being too skint to stump up for something more obviously costly, oranges seem to have a longstanding relationship with Christmas (if you've ever reached into the farthest depths of a stocking and plucked a ripe Valencia from the toe, you’ll have some idea). Whether knowingly or not, for its festive release New England Brewing has also taken a plunge into the orange’s humble but significant Christmas spirit.

Big Holiday is the Uralla brewery’s once-a-year warm weather companion piece to Big Winter, a Belgian strong ale which, with its toffee, raisin and dried fruit characters, provided sweetness and warmth in the depths of the colder months. This summer edition continues the theme by being a strong Belgian style ale but here, rather than the malt, much of the focus is on the yeast – where their open top fermenters really get to shine – and the extra additions, one of which is the peel of oranges (organic, no less) and the other Tasmanian pepperberry. The pair make good on their intentions as the beer presents ample pepper and Christmas spice on the nose before the orange steps forward with juiciness on the palate then the rind, coupled with the hops, offers a bitterness that’s deftly done and combines to good effect with a finish that’s surprisingly light and dry for a beer that clocks in at a shade under nine percent ABV.

In a season where hoppy quaffers tend to come to the fore, Big Holiday marks something of a welcome departure from the norm, offering plenty of complexity that's presented appropriately in a large and heavy 750ml Champagne style bottle and making it a fine centrepiece to any shared meal over the festive period.

And select outlets in QLD and NSW