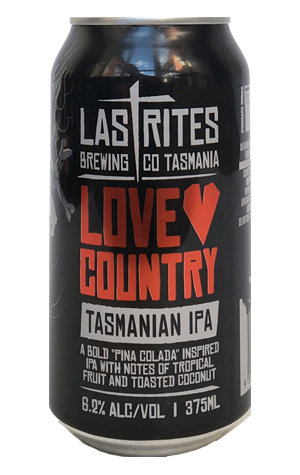 This beer was one of Last Rites' earliest brews, then going by the name Pina Colada and attempting to mimic the popular cocktail in IPA form. It's evolved over time, becoming instead the Love Country Tasmanian IPA and the first of the Cambridge brewer's beers to be canned.

It's a beer with plenty going on. Tropical hops and toasted biscuit malts dominate the aroma before the essential characteristic of any Pina Colada comes to the fore: toasted coconut takes centre stage flavour wise, where you'll find flashes of vanilla too. There's a resinous, fruity hop flavour poking through too, as well as a gentle bitterness.

Given its off kilter inspiration, it's likely to be an acquired taste, but it's one that caught the eye of one expert, with Bucket Boys founder and Cicerone Johnathan Hepner naming it one of his ten best Aussie craft beers of 2016 in an article for Concrete Playground.