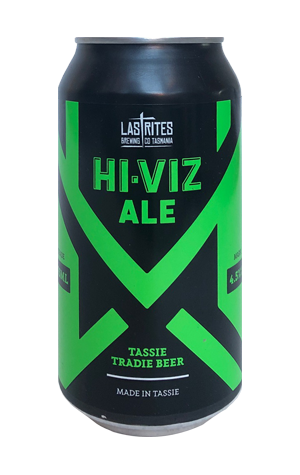 Tasmanian brewery Last Rites has been a good example of an operation keen to explore many realms of the beer spectrum since first firing up its brewery, subsequently releasing a steady stream of colourful – and often even more colourfully named – beers in recent years: the Yamburglar, The Puddle Maker, Big Smelly Doona and their ilk.

Yet, while this aspect of the craft beer landscape is arguably the defining feature of this moment in time, there's also been a push from many brewers to add a "normal" beer to their lineup, one to appeal to a broad audience not seeking anything overly hazy, fruity, boozy or funky. Often they come with a name making it clear they're targeting locals – see this article for more on that – and that's the case with Hi-Viz.

It's tagged a "Tassie Tradie Ale", one "proudly made by some Tassie blokes, to be drunk anywhere", and its loud green label is the liveliest part of the package. Inside is a beer closer to the mainstream than anything Phil and his team have previously released: a flicker of floral hops, some honey like sweetness from the malt, a touch of fruity esters and low bitterness. In other words, as the label states, it's for those seeking a beer "without a challenge every mouthful".