When the Last Rites Brewing Company opened the doors of its brewery in October 2015, it was enough of an occasion that Tasmanian Premier Will Hodgman was in attendance. He was invited to assist in brewing a beer on the occasion too: the Premier’s Horn.

At the time, the explosion of Tassie’s microbrewing scene was in its infancy and the number of brewing companies in the state was still in single figures – with many of those already brewing for several years. Since then, that number has risen to more than 20 – and competition for taps is getting fierce as a result – but, from their site at Cambridge, just a few minutes from Hobart airport, the Last Rites guys seem to be holding their own.

The founders of Last Rites describe themselves as friends and enthusiastic homebrewers. They include former research chemist Phil Zakaria, Brett Allchin and Chris Cooper, co-owners of craft beer haven Preachers in Hobart, and Vineyard manager Tom Potter. The team started out contract brewing at Morrison Brewery in Launceston before good feedback for their beers at festivals and other events gave them the necessary boost to invest in their own equipment and set up a brewery and venue closer to home.

The focus at Last Rites is on New World, hop driven beers – something that was, for the most part, missing in Tasmania when they launched. As such, the core three features an American influenced pale ale called Horn of Diligence, a malt driven red called She’s No Bette Midler, and a deep, complex black IPA called Dead Man’s Revenge.

This lineup is regularly embellished with a diverse array of seasonal offerings that has included everything from a Raspberry Ginger Beer to the Barilla Bay Oyster Stout, and from the Georgie Ella Springtime Ale to the Cloudy With A Chance Of Awesome Pale Ale.

Over the course of their first year, the brewery moved from hand labelling longnecks to a small bottling line for 330ml bottles. And, towards the end of 2016, they decided that, rather than upgrade the bottling line a second time to keep up with demand, they’d invest in a canning system.

One of Last Rites’ earliest releases – the Pina Colada – was rebranded as Love Country Tasmanian IPA and became the first product to be released in a can, joined by Slightly Laid Back Lance, a lower alcohol sessional beer named after a guy they met on a beer tour of Brisbane, with Dead Man’s Revenge the third to receive tinnie treatment.

With competition hotting up across Australia as more and more people take the plunge and become commercial brewers, it’s wise to have your own outlet to sell direct to customers. And that’s what Friday and Saturday evenings are for at Last Rites’ Cambridge home. There, they welcome a busy crowd to the cellar door, with local food trucks in attendance too.

That said, the focus for the future is very much on packaged products rather than kegs, hence taking over a second warehouse within a year of opening their first. It allows the Last Rites team to continue filling their bigger tanks with the core three while using smaller tanks for experimenting and developing new products.

They’re also venturing onto the mainland, something that not too many Tasmanian microbreweries have done to date, so if you live outside the state then keep an eye out for tap takeovers at good beer venues (and in the Crafty Events Calendar where they’ll be listed). For the foreseeable future that will remain a small part of the brewery’s plans, however, with Last Rites concentrating on the local market. And, given how many brewers are brewing beers for that market, you’d better book your ticket to Tassie now. Tasmanian brewery Last Rites has been a good example of an operation keen to explore many realms of the beer spectrum since first firing up its brewery, subsequently releasing a steady stream of colourful – and often even more colourfully named – beers in recent years: the Yamburglar, The Puddle Maker, Big Smelly Doona and their ilk. Yet, while this aspect of the craft beer landscape is arguably the defining feature of this moment in time, there's also been a push from many brewers to add a… Read more
Golden 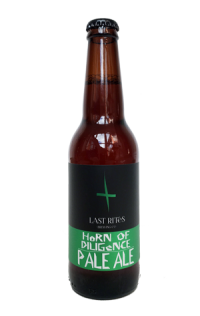 If you're going to launch a brewery with a focus on New World style beers, you need to have a pale ale in your core lineup, which is where Last Rites' Horn of Diligence comes in. It's a pale ale in which they've given as much punch to the malt bill as the hops, with Vienna and Munich malts placing it towards the darker and chewier – think toffee like crystal malt flavours – end of the style spectrum. The hops lend both citrus and spice to Horn of Diligence, as well as a big and building back… Read more
Rich Brown 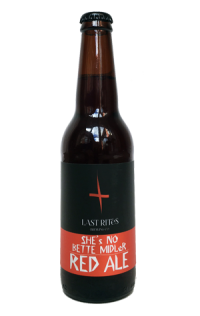 They like to have a bit of fun with their beer names at Last Rites, with She's No Better Midler one of the more unusual we've come across in our time covering the local beer scene. It's a name that makes sense, though, and not just because of the red hue both beer and Bette's hair (in the past, at least) share. The actress and singer has a reputation for being big and ballsy, for laying it on thick, and this is a beer that comes with layer upon layer of rich character too: cake batter, caramel, ginger… Read more
Red 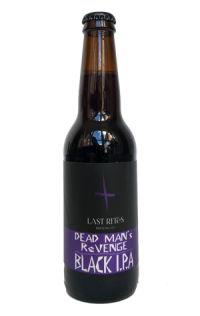 The pick of the Last Rites beers when The Crafty Pint first visited just as they were first opening their brewery bar (and the one that appears in The Great Australian Beer Guide) is this black IPA that holds little back in its dense-as-anything, 6.5 percent ABV deeply dark depths. It's the hoppiest of their regular beers, with those hops delivering pine and forest floor like earthiness, nicely balanced by a wall of specialty malts that add a touch of chocolate and roast to the mix.… Read more
Black This beer was one of Last Rites' earliest brews, then going by the name Pina Colada and attempting to mimic the popular cocktail in IPA form. It's evolved over time, becoming instead the Love Country Tasmanian IPA and the first of the Cambridge brewer's beers to be canned. It's a beer with plenty going on. Tropical hops and toasted biscuit malts dominate the aroma before the essential characteristic of any Pina Colada comes to the fore: toasted coconut takes centre stage flavour wise, where you'll… Read more
Golden Yellow The brewers at Last Rites are no strangers to giving their beers some pretty unusual names, from She’s No Bette Midler to The Big Smelly Doona. Often the inspiration for those beer names stems from day-to-day happenings at the brewery. And, while we hope that wasn’t the case for The Big Smelly Doona, it's certainly true for The Puddle Maker. Named in honour of those brewers who can’t help leaving a puddle behind them whenever they go, the beer is an imperial red IPA big enough that brewing… Read more
Red