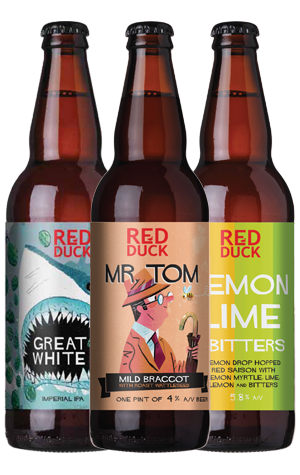 Time for another update on the latest beers to make their way from the mind of Red Duck's arch innovator Scott Wilson-Browne into beer form. And they make for a collection as diverse as you'll have come to expect.

Mr Tom is the latest Red Duck beer that looks to recreate a spot of history, or at least an urban legend. Apparently, in Ballarat in the 1920s, a gentleman by the name of Mr Tom who'd arrived via steamship in the Port of Melbourne, travelled by train to the Goldfields to see what all the fuss was about. Arriving in late autumn, and fond of an ale, he immediately sought refreshment and, while in conversation with the publican, said he knew a recipe for a beer better than those he was offered. He was invited to brew a batch, which was received by all as magnificent but, when the last drops had been drunk, only an empty glass remained as Mr Tom had quietly left, assumed to have continued on his travels. Balderdash or not, Red Duck has imagined what that beer may have been, creating a 4 percent ABV honey brown ale also featuring wattleseed.

Joining Mr Tom is Lemon, Lime & Bitters, a "lemon drop hopped red saison with lemon myrtle, lime, lemon and bitters". It's a darker, red saison featuring some malts from Holland to which were added Lemon Drop hops and the other aforementioned ingredients. The outcome? "A malty, fruity, red saison with overtones of lemon, lime and bitters," according to the Ducks.

And, finishing on the biggest of the trio, we have Great White, an imperial IPA measuring 10.8 percent ABV and 108 IBUs. It's the whopping older relation to the brewery's Hop Shark, one that's loaded with Topaz, El Dorado, Chinook, Amarillo, Mandarina and Calypso hops and of which the brewery says: "A big, high alcohol, super hoppy and bitter pale ale."

Of course, this is Red Duck, so when we say "trio" there's actually more than three as the fourth iteration of the brewery's popular chilli chocolate beer Sexy Thing is also doing the rounds with some Rolling Stones-esque lips on the label.

And select bottleshops around Victoria