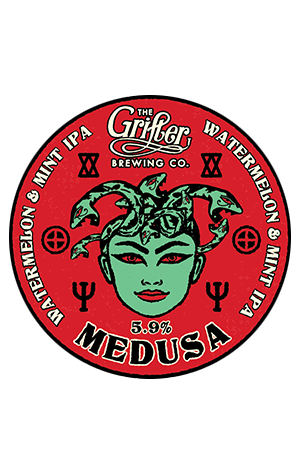 Last weekend, the team behind Brisbane’s most eclectic beer venue, Netherworld, held its first Monster Menagerie event, inviting sixteen local brewers to come up a with wild and/or weird beer to launch over one wild and/or weird weekend. With their invitation, the Grifter Brewing Company chose to make Medusa, a watermelon and mint IPA.

Regulars at the Marrickville brewery will well know the brewers there are fully capable of successfully utilising watermelon in a beer, as evidenced by their Serpent’s Kiss watermelon pilsner, a one-off that proved so popular that it’s hardly been off tap in the past two years and nabbed one of the top spots in our Best New NSW Beers list when it first came out.

While Medusa is a significantly different beer to Serpent’s Kiss, the two are most definitely bound together (not least in the artwork where the snake enveloping the watermelon on the latter is the same one growing from the gorgon’s head in the former). Serpent’s Kiss is a lighter, sweeter and easier beer to drink, more reminiscent of the freshness you feel when eating the fruit itself, whereas Medusa doesn't let the watermelon hold as much sway. It’s there, undoubtedly, on both the aroma and palate but, being an IPA, there’s more to contend with in the hop department and those comes through with a longer, lingering bitterness. The mint’s contribution is subtle beneath all this, with just faint characters hiding away somewhere in this super pale beer. Nevertheless, like its namesake, Medusa is both unusual and captivating.