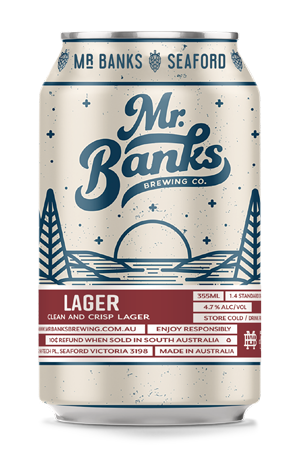 One of the ways in which Mr Banks first caught drinkers' eyes in and around its Victorian base was through its can designs. From the off, they featured bold illustrations that became bolder and more flamboyant over time. As of spring 2018, at least when it comes to the brewery's new core range, the Farmers have decided to streamline things a little, creating a quartet of beers in which only a strip of colour sets them apart.

Among the four is this Lager, which pours very pale with a little lemon citrus hop aroma and some earthy, spicy hop flavours. And, while it feels like some sort of beer writer faux pas to use the done-to-death term "crisp" when talking about pale lagers, you can't deny there's a crisp and persistent bitterness at play too.