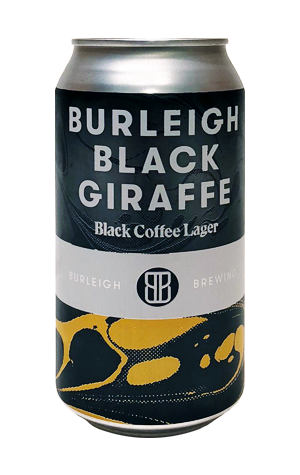 The Black Giraffe was one of the first releases in Burleigh Brewing's Bit On The Side series, with the black coffee lager making its debut way back in 2010 and promptly picking up a gold medal at the World Beer Championships in the US soon after (a feat repeated many times since). It made a habit of reappearing, sometimes a little tweaked but always the same at heart, in large bottle format and has now made the transition to cans.

It's a combination of coffee roasted locally to the Burleigh Heads brewery, the lager yeast strain they use in all their lagers and a selection of specialty malts. It pours a deep mahogany, with the coffee character coming across as full and sweetened in combination with cola and dark figgy fruits on the nose. There's plenty of chocolate, cocoa and toffee awaiting in the glass (or can), with a touch of drying roast underpinning the beer's sweeter side.

Eight years on, it seems quite remarkable that Black Giraffe was once one of the more exotic beers released in Australia yet it remains an enjoyable and slightly left of centre drop.