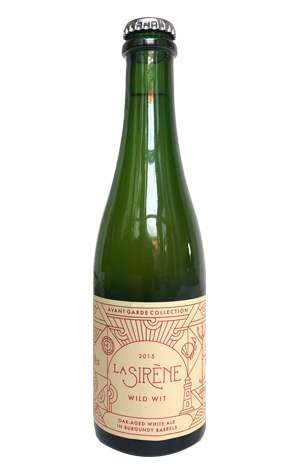 The team at La Sirène has been building its barrel collection for so many years and filling them with so many different liquids now that deciding which beer to release next must be similar to being a kid in a toy store with permission from their parents to choose absolutely anything, but just the one thing. For autumn 2019, the urban farmhouse kids opted to empty ex-Chardonnay barrels from Burgundy that had played host to a white ale since way back in 2015.

The idea was for the white ale to act as a "blank canvas" for their house yeast, with the beer undergoing secondary and tertiary fermentation before Galaxy hops were added to introduce some New World stylings. The result is a beer that offers layers for the drinker to unfurl. There are young tropical fruit characters and a touch of sweet acidity, plenty of oak character – particularly to taste where there's also a creamy, bready sweetness and a wine like side palate pucker – and a delicate lactic sourness. For all that, it's a gentler and more approachable addition to the brewery's line of barrel-aged releases and one your wine drinking mates would likely relish.