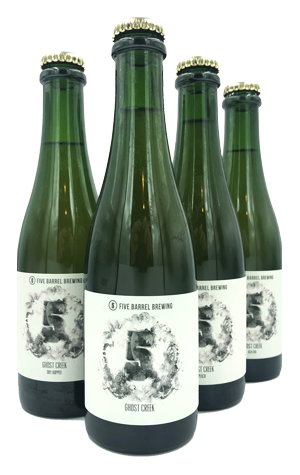 Five Barrel founder Phil O’Shea comes from a homebrewing background and hasn't forgotten his roots, as made abundantly apparent by this quartet of releases. Created in partnership with Marcus, a Wollongong homebrewer and friend of Five Barrel, it features the homebrewer’s sour culture in combination with an English ale yeast.

The sat in a 500-litre barrel for about a year and, upon leaving the barrel, was split four ways; there’s a straight version, one that was dry-hopped, another that made friends with some peaches, and a final offering that features an Amazon Basin fruit called achacha.

The resultant base beer is dry and sharp, and throws flavours of orange peel and orange sherbet. The dry-hopped version uses Hallertau Blanc, which helps to tamp down the orange characters and bring in some white wine and pineapple notes. The achacha, well, that’s a fruit flavour with which I’m not familiar, but the Ghost Creek version it’s hiding in shows up some pear-like flavours, while remaining closest to the base beer in taste.

The personal favourite of the quartet is the peach version. The fruit gives the beer a slightly golden hue and a softer mouthfeel than the others. The peach also makes the beer a tad sharper, though that sharpness levels out towards the back of the palate.

Obviously, when you split a 500-litre barrel four ways you don’t end up with a lot of each individual beer - so you'd best get in quick. As for the name, it comes from a story surrounding the ghost of a soldier who killed himself rather than be court-marshalled and is said to haunt a creek in Wollongong to this day.