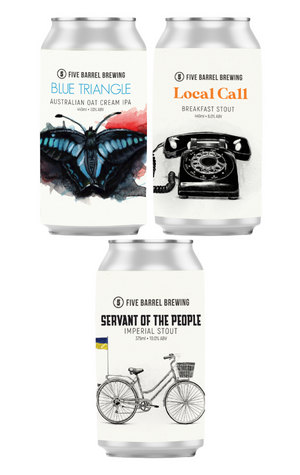 We've reached the second release in Five Barrels’ butterfly series, and I’m surprised it took them even this long to name a butterfly I’ve never heard of. (I am not well-versed in butterfly varieties… I mean styles… I mean species.)

The Blue Triangle butterfly apparently likes to live in tropical rainforests in the east of Australia, so this oat cream IPA is thick with Aussie hops bringing tropical notes. The hops (Ella, Eclipse and Galaxy) are buttressed on one side by lactose, and on the other by wheat and oats aplenty, which results in a broad sweetness of fruits including creamy pineapple, a spritz of orange and a late splash of melon. There’s enough bitterness hiding in the undergrowth to keep you on your toes, and like the cloudy fog that descends into rainforest valleys, this beer is hard to see through.

I laughed when I realised the phrase "local call" has been meaningless for about fifteen years. But there’s nothing obsolete about Local Call Breakfast Stout. It has fantastic body for six percent ABV, cushiony like the padded inner sole of high quality running shoes. The carefully constructed malt bill is sturdy scaffolding for the coffee, which begins as an intense aroma and moves through to a slow spread across the tongue, filling the whole mouth. The chocolate and vanilla are there, but are supporting characters; it’s the coffee that shines.

Five Barrel have been releasing their imperial stout annually for five years now, but this year they’ve tastefully released it under a new name. While its previous name – Hero of the People – was not a current Russian military reference but rather a tongue-in-cheek reference to a medal of the dissolved Soviet Union, Five Barrel made the great call to rename the beer. It’s now called Servant of the People, which brings to mind Ukrainian president Volodymyr Zelenskyy as it’s the name of both the satirical TV show he starred in and the political party he founded.

Anyway, the beer itself begins by suggesting roastiness, but then eases into molasses with hints of fruit. There’s a lovely chocolate liqueur character at the heart of it: the sweetness is subdued, but the thick-almost-oily mouthfeel and wafting alcohol notes on the upper palate give it a long finish.

And the barrel-aged version? Sometimes a barrel brings a whole lot of extra flavour notes and complexity to a stout, and sometimes it smooths out and integrates the existing flavours. The ex-muscat whisky barrel from Headlands Distilling Co has done the latter, rounding out the molasses and fruit and chocolate notes and helping them blend together in a cohesive whole.