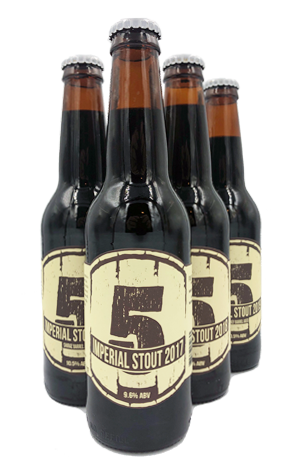 Over the past few years, when the weather gets colder it’s time for Five Barrel to roll out the big, dark imperial stout Phil O’Shea has been hiding away in barrels for months.

Each year the beer is made in the old school high gravity style, with two mashes going into making the one brew. In 2017 and 2018 it was stored in shiraz wine barrels and came out measuring 9.6 percent ABV. For 2019, Phil opted for something a little different: the shiraz barrel version is back, albeit bigger at 10.5 percent ABV, and is joined by a companion that spent six months in Tasmanian whisky barrels.

The whisky characters are quite prevalent in the latter but, like any other Five Barrel beer you can mention, there’s a real sense of balance. As it warms up, the whisky notes give way to chocolate and coffee hints.

As for the shiraz barrel-aged version, the initial thought is of liqueur coffee, even though the underlying beer still displays plenty of roasty, bitter dark chocolate characters and is as thick as you like, with a tannic edge to cut through the gloop. There's a twigginess and burnt nuttiness to the aroma too, rising from a beer that leaves you in no doubt there's booze at play, whether you're judging by intensity, density or the way it goes to work on the back palate.

If you’re lucky, head to the taproom and you might still be able to get your hands on the earlier vintages for a vertical tasting.