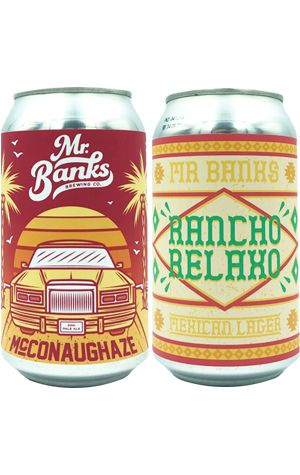 They love a play on words at Mr Banks and McConaughaze – the name given to a DDH hazy pale that has made a couple of appearances in 2019 – is up there with our favourites. The beer inside the limited run of cans released in the lead into Christmas 2019 us up there with our favourite Mr Banks beers too. Very, very pale, it's one of the most easy-drinking of hazy pales we've come across. Aromas flit from lemon-lime-mandarin citrus to a touch of chalkiness, while it's grapefruit and lime all the way to taste, with a pinch of bitey bitterness for added refreshment.

Another new beer on limited release is Rancho Relaxo, a rare uber-bright beer from Chris Farmer and team. Inspired by South American lagers, thus featuring maize as part of the grain bill, but with New World hops in the mix too, it's very pale, very light on the palate, with some delicate lemon-lime character enlivening the easy-going lager base.