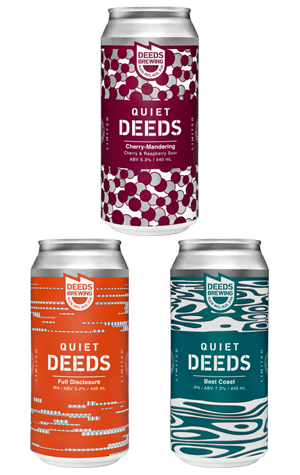 Like most brewers, the crew at Deeds took a bit of a breather from releasing new beers over the festive period. But it hasn't taken long for the tinnies to start flying from the Glen Iris brewery once again. Cherry-Mandering was brewed for February's Brewer's Feast and sees them add the fruiting rate (120 grams/litre) to their cans, as per the hopping rates of their IPAs. It makes sense for those that are into such things; after all, there's little point crowing about adding a tonne of fruit to a beer if nobody know how big the batch was. Here, the cherries lead the way in the bright crimson beer (reminiscent in the glass of a lighter French table red) with lolly like sour cherry aromas lying over a sweet raspberry underbelly. The acidity cuts a lively swathe across the palate of what's a playful, fun affair.

Full Disclosure is a pretty straightforward IPA by Deeds' standards, a mere 12g/l of Motueka and Hallertau Blanc hops doing their thing within a lean and pale number which has tropical and grapefruit aromas to the fore, a little lemon on the palate and a bitterness that lingers a fair old while.

Meanwhile, Best Coast is tagged a West Coast IPA yet is perhaps best imagined as a traditional West Coast IPA put through the Deeds filter; while it's by no means as dense or opaque as their hazies, it leans a little paler and sweeter. Upfront, you'll find creamy, almost vanillin orange citrus and candied passionfruit, while there's a cocktail fruit intensity across the palate – complete with a shot of booziness – and a finish that's more juicy and sweet than hefty and bitter.