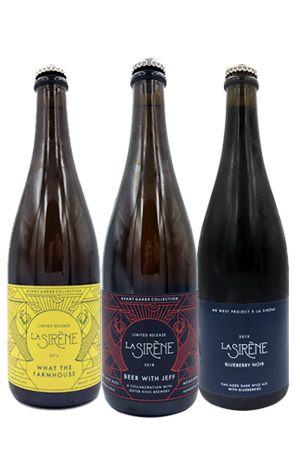 Given the limited amounts of each that have been released and the fact we've taken a little while to post this, this trio might require a bit of hunting down. But none is the sort of beer with which you want to sample just enough to put together a write up and pour the rest away; they all warrant time dedicated to them.

What The Farmhouse is another La Sirène beer featuring both spontaneous fermentation and a spot of blending, with a young, acid forward farmhouse ale coming together with a wild ale aged 13 months in oak before a dose of dry-hopping completed the picture. As you might imagine, this translates into a beer with much to unravel, with fragrances that encompass Brett, oak and hints of apricot, an upfront sprightly, refreshing acidity underpinned by a deeper acidity that only comes with age. There's some lacto funk in there and zesty, citrusy flavours on the palate before a finish that's quenching, sweet and dry all at once.

Beer With Jeff is, as the name makes clear, a beer made with Jeff Stuffings, one of the founders of Texan farmhouse brewery Jester King, and is home to both brewery's house cultures. The first thing to hit me was the oak character – reminiscent of an oaked white Burgundy – but it's not long before acid (both hints of sweet acetic acid and a prickle on the palate) makes an appearance, not to mention orange blossom and rich citrus characters. While oak and acid are the key players, settle in and all those subtle unknowns that only come out when there's so many beasties in the mix raise their heads in a beer that's potent yet balanced and pleasantly quenching for farmhouse explorers.

Which brings us to Blueberry Noir, a collab with Footscray bar and bottleshop Mr West. It's based upon the brewery's Farmhouse Noir then loaded with whole fresh blueberries and aged for 12 months in French oak. They clearly held little back on the fruit front as there's a crimson tinge to the whole shebang – as if a bag of dense jus has been emptied into a stout. The blueberries are joined by marzipan on the nose, while tart fruits dominate on the palate where there's a puckering and potent acidity, the result being a beer in which the dark malts there at the beginning of the process contribute little more than colour at this stage in its evolution.