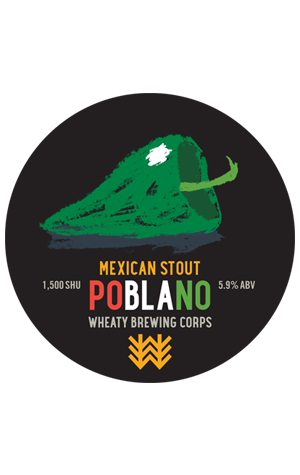 The Wheaty Brewing Corps crew are well known for their witty, pun driven beer names, however there was no comic intent behind releasing a Mexican stout amid the coronavirus pandemic. Instead, the Poblano was brewed back in February in anticipation of the West Torrens Chilli Festival, an event at which the Wheaty team run the bar every year. When the festival was cancelled, the Poblano was put in the cellar ready to debut as part of the Wheaty Brewing Corps 6th birthday.

Incorporating 1500 SHU (Scoville heat units) of oomph, the Poblano brings together the flavours and spice of three different chillies: ancho, guajillo and habanero, all of which were deseeded before being added in the whirlpool and during fermentation. Alongside the spicy fruits the brewers introduced a camionadas of cinnamon, cocao nibs and vanilla.

The chilli heat is barely noticeable on the first sip, just tickling a little on the back of the tongue but, as the beer warms, the heat slowly builds while remaining within a restrained capacity. There's a decent savoury, earthy chilli aroma floating amid a touch of sweetness and roast in the aroma of this dark brown stout. The earthiness also comes through on the first sip, kind of like biting down on a green chilli, while there's a whiff of smoke and some burnt toast vibes, all while chocolate sweetness and creaminess floats throughout to blend the flavours together. The heat never reaches unbearable stage but instead just lets you know it’s there, adding to the Poblano's moreish nature.