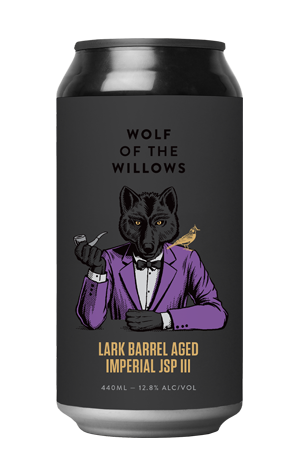 They've got quite the thing going on with Aussie spirits producers, have Wolf of the Willows. They've brewed beers with Tequila Tromba and Patient Wolf Gin and here comes their third collab with the godfather of Tasmania's whisky community, Lark Distillery. This instalment follows the same traditions as the previous two in their ongoing Barrel Exchange Project: barrels from Lark make their way to Melbourne to be filled with an imperial version fo Wolf of the Willows' JSP (Johnny Smoked Porter); after being aged for a few months (nine in the case of III), the barrels are shipped straight back to Tasmania to be filled with whisky in order for that liquid to pick up some of the beer's character.

The 2020 releases land as July turns to August, with JSP III weighing in at 12.8 percent ABV and Lark's whisky going by the name The Wolf Release 2020. We've only sampled the beer, one which starts out smoky even in its original, non-imperial form and carries that character through here, where the smokiness, if anything, receives a peaty boost while gaining an injection of sweet, spicy, whisky juiciness. Allow it to warm and broaden on the palate and its intensity grows, with spicy, oaky, bitter chocolate balanced by a tannic dryness.

In terms of appearance, it's far from the opaque black of some imperial dark beers, coming across closer to the midpoint between a porter and a deep copper whisky. And that's a good way to think of Imperial JSP III overall: a drink sitting midway between the two liquids that make up its constituent parts.