Beer Wolf of the Willows Disco of the Dead II 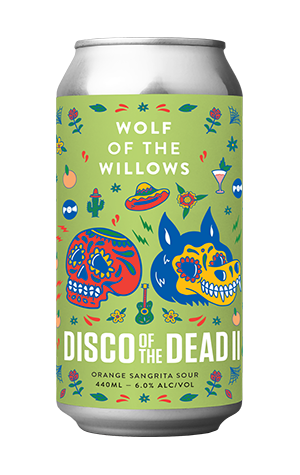 Melburnians hopefully only have a short while long where most of their partying has to be in the loungeroom (although if I may: the kitchen and a balcony are welcome spots too) and Wolf of the Willows have the right release for these final days of lockdown. To help people shake up the monotony of 2021, Wolf of the Willows have once again partnered with their pals at Tequila Tromba to celebrate the Day of the Dead with a Disco De Los Muertos - AKA Disco of the Dead. Disco of the Dead II is inspired by the sangritas of Jalisco - chasers often served with Tequila Blanco (the unaged, white spirit) and this sour includes a mix of Tromba Blanco Tequila, along with orange juice, lime, pomegranate and habanero chillies.

Like a good cocktail, the “orange sangrita sour” is remarkably well-integrated, with the lime and OJ hitting first before being joined by a richer fruited note that's likely thanks to the pomegranate. Only at the end does the light heat of habanero hit, as if the brewers from Wolf have somehow snuck into your home to lightly season your glass with chillies. Because many of us are not just stuck at home but also well aware of the ins and outs of QR codes, the beer comes with its own. Scan it and you’ll be transported to our own Disco of the Dead party that Wolf of the Willows and Tromba have put together featuring cocktail recipes and its own Spotify playlist.