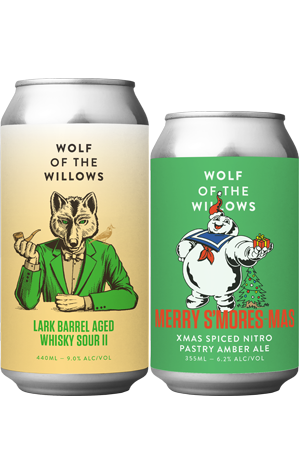 Well, they're not really twins at all, other than in the sense that Arnie and Danny were in the film of the same name. One's a monster of a cocktail-inspired beer, the other a spice festive treat. One's in big cans, the other in normal ones. But they both come with a charge of nitro so that's what I'm going with.

The monster is their second Lark Barrel Aged Whisky Sour, in which the nitro is just one part of many. Also bringing this 9 percenter together are smoked malt, lactose, fresh lemon juice and zest, and time in re-used Lark whisky barrels. It makes for one of the least likely nitro releases you'll come across, but one that hits the intended mark: mimicking a whisky sour. The lactose, booze and oak do a great job of recreating the full mouthfeel of the cocktail, while the whisky character feels more potent than any of the imperial JSP Lark beers – pass it under the nose of a mate without letting them see the glass and they’d likely not pick it as a beer. There’s smoke and no little spiciness, as well as a building warmth, a little creamy oak and lemon, and then more of that smokiness, lingering into the night.

Its partner-in-crime is Merry S'Mores-Mas, in which their S'Mores-inspired dessert beer gets a festive injection: the toasted marshmallows, cacao nibs, and natural vanilla are joined by Mork's Christmas Spice Blend, cherries and a shot of Saint Felix Cherry & Cacao Husk Brandy. It's one heck of an invite list, with creamy vanilla nougat smothering some of the base malt character in the deep amber drop to leave the festive spices and brandy free to bring Christmas pud vibes galore.