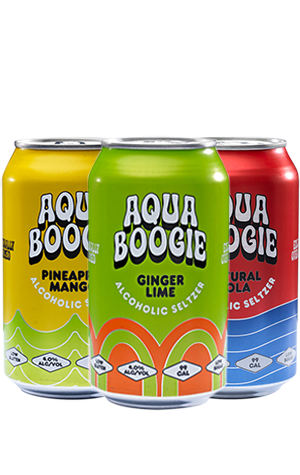 The Aqua Boogie range of seltzers from Wolf of the Willows might be a new entry into Australia’s seltzer market for summer 2021 but strictly speaking, the range isn't quite brand new. Instead, the brewery has been quietly making and releasing them since 2020 under the wider Wolf banner, slowly refining their recipes and developing a personality for the seltzer to sit under. It turns out that personality is one of a wave of nostalgia that Sergeant Pepper himself would approve of, with Aqua Boogie the new home for all things Wolf seltzer.

Like many, the seltzers are being promoted as being low calorie, low in sugar and low in gluten but one way the range seems to stand out is in their serving suggestion. Sure, like others, drinking Aqua Boogie straight from the can is one option, or over ice, but the brewery have also encouraged trying them side by side a spirit as a boilermaker or combined with something distilled as a mixer. As for the opening trio, first up there's Pineapple Mango, where the ripe mango leads on the flavour front and although the pineapple is a little lighter, it provides an acidity as a bit of a call and response to mango's richness. Joining it is Ginger Lime, made with native Australian ginger for a drink that’s particularly close to ginger beer but joined by the lightest touch of citrus and where you really start to see how mixing it with tequila could be the right way to go. Finally, Natural Cola stands apart from the others by some way, given it doesn't pour the same clear and pale colour as the other two (or most seltzers for that matter). Instead, it looks like the kind of cola you might buy from a fancy cafe and to taste, it has a similar herbal mix which is apparently thanks to the brewery using cola nut, crushed cherries, cinnamon and vanilla and once again, the mind does wander to which spirits you might like to try with it.

Note: there may be other hard seltzers released by Wolf of the Willows, but we won't be writing about them. We're happy to let readers know which breweries are playing in this space, but we're a beer website and need to focus our attention on the diverse array of beers being released.