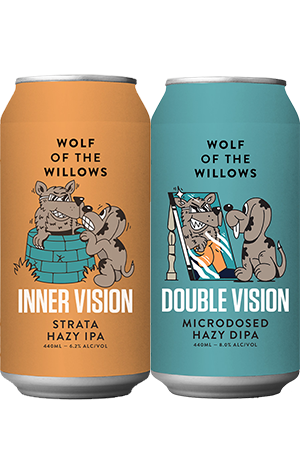 You can't accuse anyone involved in hops of standing still. Whether it's breeders developing new varieties, growers planting ever more acreage, manufacturers finding new ways to deliver the best bits of the little green cones to brewers, or brewers using them in new and different manners, it's a fast-moving world. And here, via their Inner / Double Vision series, Wolf of the Willows get to play around too.

With Inner Vision Strata, the new comes in the form of using nothing but relatively new, and much-hyped, hop variety Strata. It's one of the punchiest tropical fruit bombs to come out of the US, and can elicit characteristics likened to marijuana. In the Wolf brewers' hands, it's very much in the former camp. The bright orange can looks like the sort of thing a politician wraps themselves in to showcase their working class credentials come election time, although the liquid is more of a peach colour, hinting at the fluffy sponge cake sweetness through which the Strata flows. There's sweet, ripe pineapple and mango, even a hint of banana, akin to a tropical fruit punch / juice, with a little prickly spiciness in place of any discernible bitterness.

For Double Vision Microdosed, they take their hazy double IPA and try out the method of dosing frequently with hops (Sabro, Cryo Pop, Citra and Motueka) – every 12 hours in active fermentation as the yeast is creating alcohol and carbonation, then daily afterwards. They say this translated to 14 dry-hopping additions, and as there aren't many people aware the word "quattuordecuple" exists, let alone that it means 14 times, microdosed it is rather than QDH HDIPA.

Almost milky in appearance with a head that's not far off a nitro pour, again it's first and foremost tropical vibes – sweet pineapple and ripe watermelon – with a blossom like floral top note, hints of something herbaceous in its midst, and a full, almost creamy body, aided no doubt in part by the coconut oil element of Sabro. There's minimal bitterness at play here too, while that fulsome body is pretty much the only indication it's a third as strong again as Inner Vision.