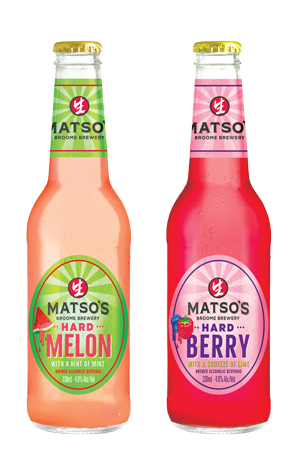 The arrival of two new Matso’s Hard variants looks ahead to warmer weather and, for the majority of the nation, freedom. The brewed duo needs little in the way of explaining – there’s no DDH or the like here – however, the balance of mint and lime provide more interest than one might first think.

Hard Melon with a hint of mint comes on with watermelon candy aromas before being licked a refreshing common mint on the tongue, which trails after the sip. Hard Berry’s mix of notable blueberry and raspberry gets spiked with a slight fresh lime edge, before a short finish.

The pair offer lower than expected carbonation, sweetness is reasonably restrained, and with "healthier" credentials of "50% less sugar than leading premix drinks", "made with real fruit" and vegan-friendly attributes, Matso’s Hard lineup will be looking to offer colourful competition to the nation's growing band of hard seltzers.